A Young Soldier's Letters From The Front - Go55s
Skip to content 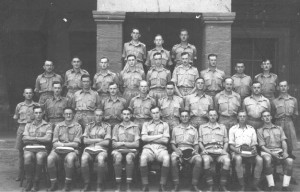 It was after he was lying in the stinking trenches of Tobruk, watching his fellow soldiers dying under the tracks of Rommel’s tanks, that a young Australian infantryman began writing letters to his mother back home in Sydney.

It was Easter 1941 and the Desert Fox’s hitherto invincible Panzer divisions were rolling across the North African sand dunes on their way to what they expected to be an inevitable victory for the German war machine.

But it was the stern resistance of the Allied troops, among them a group of mainly Australian infantrymen, which was to rewrite history and ultimately lead to Rommel’s unexpected withdrawal.

Among these  raw recruit soldiers was John Murray, a 26 year old former jackaroo. In all he wrote more than 100 letters to his mother, Constance Murray, from that terrifying front describing in vivid details the harsh desert conditions which led to the embattled defenders going down in history as the Rats of Tobruk. 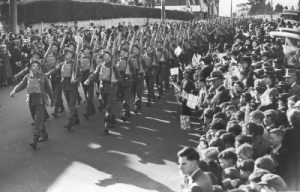 John Murray’s 2/13th Battalion marching through Katoomba  on their way to the camp at Bathurst.

John Murray was an original volunteer member of the Australian 2/13th Battalion which went to North Africa and not only became the first AIF unit to be attacked from the air and on the ground by the Germans, but also the last AIF unit to leave Tobruk.

It was during the decisive Easter Battle of Tobruk in 1941 that John Murray and his battalion played their part in an ingenious strategy which eventually turned the tide of war against Rommel.

As they were lying in their special anti-trenches at dawn, the Australians were instructed to duck down to allow the ominously advancing massive tanks to roll over them.

Heavy loss of life was inevitable but as the tanks crossed the trench lines, they left behind their following infantry, now unprotected by the Panzer muzzles.

It was the first time the Germans had been defeated on land. 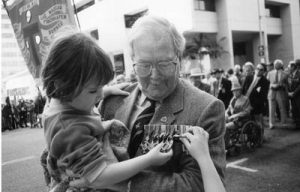 The 1941 siege of Tobruk lasted for 240 days until the vastly depleted survivors were relieved by the Eight Army.

But Rommel’s previously invincible hold in North Africa was badly shaken and culminated in his eventual defeat at the epic battle of El Alamein in late 1942.
Sydney author’s remarkable discovery leads to an historic family chronicle.

John Murray survived the North African campaign and returned to Australia where he was appointed an intelligence officer and went on to serve with distinction in New Guina and Borneo.

He also became a pioneering pastoralist, successfully helped establish the tick-resistant Brahmin cattle industry in Queensland and went on to become a Liberal Party Member of Parliament in the Menzies Government (1958-1961) and later a State Member in Queensland.

But it was the discovery of the treasure trove of letters to his mother from the North African front that led to John Murray’s remarkable army career and distinguished later life, being published as part of an extraordinary new book.

Its author is John Murray’s niece … Sydney writer Louise Austin, and her grandmother Constance Murray, was the recipient of the brilliantly  written wartime memories.

“Of course many of my uncle’s letters were heavily censored but it’s still frightening stuff.. he told me himself of how the Aussie troops had to go out at night and patrol into No Man’s Land where the casualties from the landmines was horrific,” Louise said.

“The description of the shrapnel injuries and the mortifying wounds, the unbearable heat, the constant attacks … unbelievable ,”

It was while she was researching her family history for an autobiographical book, Secrets and Silence, that Louise came across the letters and decided to carry out a series of long interviews with her then 87-year-old uncle.

“He was able to fill in all the gaps of his early life as the illegitimate son of a famous pastoralist, his wartime career, his later political and farming life and it became a real life’s work for both of us.

“I’m convinced that over the past few years it kept him alive… it was strange but despite not talking much about war during his later life, he wanted in his final years for the story to come out.”

Louise said she was able to combine the content of the letters and her uncle’s reminiscences into the book, titled Journey to Tobruk, to be published in August by Murdoch Books.

On February 10, the Queensland Legislative Assembly stood for one minute’s silence in recognition of his contributions  as a grazier, cattleman, CMF commander, and Federal and State politician.

“It was an extraordinary journey for me discovering a whole volume of family secrets which are revealed in the book and which were actually part of the history of a famous pioneering Australian family,” Louise said.

Louise lives in Sydney’s eastern suburbs with her husband Terry. Their son, Ben, 38, and his wife Rachel have a baby daughter Ashling and their daughter Lucy, 36, and her husband Stuart have two children, Hugh 7 and Bella, 5.

*Journey to Tobruk by Louise Austin will be published in August by Murdoch Books.