Cemeteries. Fading rows of marble and concrete headstones. Some stand tall, others sag into the red sands of the outback, or black soils of the coast. Records of past lives, struggles, pioneering exploits and tragedy, slowly being reclaimed by the earth.

Last July my wife and I drove into Isisford, Western Queensland, and made a bee-line for the cemetery. We saw a sign just out of town, but only one, and we were soon lost in a maze of dirt tracks. We rightly decided that a sign saying “carcass pit” referred to a dumping ground for dead livestock, not our intended destination, and drove on, finally arriving at a grassless but tidy cemetery.

I was looking for the tombstone of a woman I’d been researching, Catherine Coleman. While she didn’t turn out to be there, I found the grave of her son William, who was found dead in his bed at the stockmen’s quarters of Arno Station in 1915. He was just 39 years old. A line at the bottom added emotion to the dry facts: “Inserted by his loving mother.”

How did he die? There was no mention of illness, and a police report I found in a local newspaper from the time, stated that the police did not suspect foul play. The questions plagued me on that day, though most of the answers have been lost in the passage of time.

Walking around a cemetery is a privilege, and one that should never be taken lightly.

Some people sense the presence of souls. Most will tune into the multitude of stories interred with the dead. Sooner or later comes the humbling realisation that the world was here before we came, and will continue after we are gone, pretty much as it did before. We’re all part of this cycle of birth, love, nurturing, ambition, family and death.

Taking a walk in a cemetery works best with some knowledge of the traditions that relate to their layout. In most cemeteries the gravestones face east. The southern precinct will often hold the most ornate headstones; the graves of the wealthy. The northern areas were often seen as less desirable. Only a very few Australian cemeteries have headstones that face south, but West Kempsey in Northern NSW is one. In some cemeteries, I’m told, ‘good’ people were buried facing east, and ‘bad’ people faced west. Husbands are usually buried on the south side of a plot, with their wives on the north.

Suicides were, in the past, sometimes buried upside down, or outside the cemetery gates. A good friend of mine, a fifth generation farmer on the Mid North Coast of NSW, has a great-great aunt who died at the age of three. For some reason she was laid to rest outside the boundary fence of the local cemetery. Since taking her own life at that age seems unlikely, the family has long speculated as to why this occurred.

Cemeteries were almost always segmented into religious dominations, and often then in family clusters. The founders of dynasties, with wealth at their disposal, saw it as a badge of honour to reserve premium sites for themselves and their descendants.

There are stories in every headstone. The quality of the stone; marble or concrete, or even a mossy wooden cross. The state of repair or disrepair. And in the words themselves. 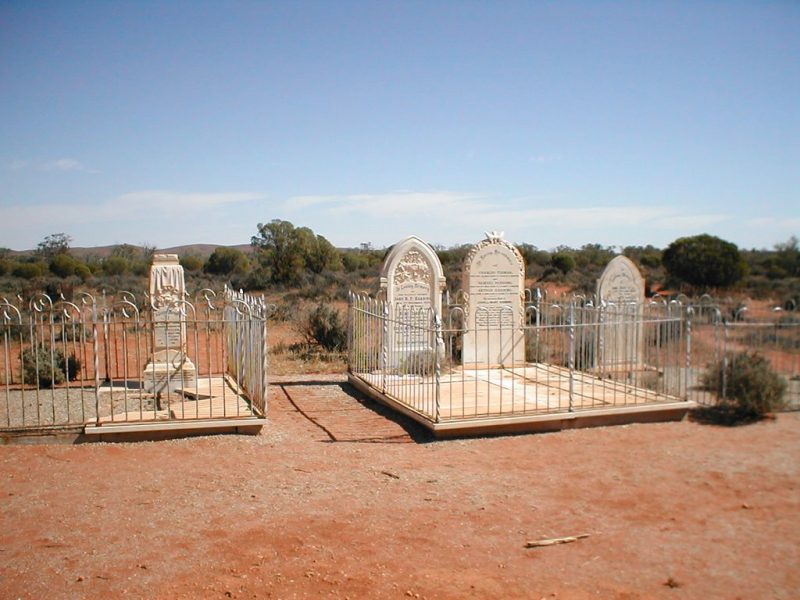 I asked Carmel Reynen, an administrator of the Australian Cemeteries Website and also the Ballarat and District Genealogical Society, what we can learn from a walk down the rows.

“Cemeteries can reveal the heartache families went through, many losing children to disease within a few days.  A headstone often didn’t cost a lot of money, a piece of tin or wood with details painted on it shows that someone did what they could to mark where a loved one was placed. Reading a headstone, with just a few words, can tell you a lot.”

Epitaphs vary from a sentence, to a full blown story like this one: “In memory of Sarah, wife of Moses Moses, formerly of Hobart Town and now of Yass. Died of a broken heart from peculiar family trials, April 1st 1841 aged 47 years. Peace to her shade, may the divine creator receive her soul into everlasting rest – and pardon her former unnatural oppressor.”

A little digging, (with a computer, not a shovel) soon turns up some facts. Moses Moses was a Jewish/English glassmaker, transported here for theft in 1815. A serial thief and escape artist, he married Sarah Brown, also a convict, in 1821. One year before Sarah’s death, Moses Moses became the licensee of the Yass Hotel. During this time he was credited with single-handedly capturing the bushranger Massey in the dining hall. Was Moses Moses the unnatural oppressor? We’ll never know.

You might be surprised to learn that Edward Dickens, son of one of the greatest writers of all time, Charles Dickens, is buried in Moree Cemetery. Edward managed a sheep station near Wilcannia, when it was a thriving river port, and he later became an alderman on the Bourke Shire Council. He died in Moree after a long period of ill health. 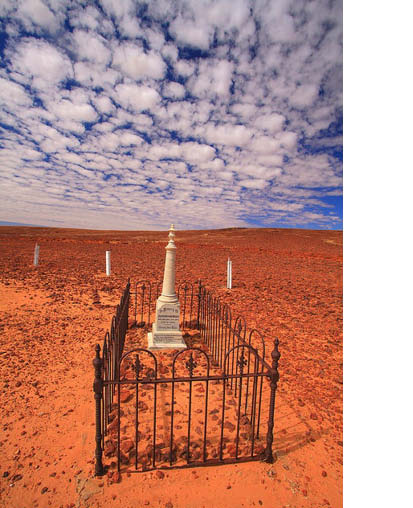 In Walcha, in the Northern Tablelands of NSW, you’ll find the grave of Australia’s greatest drover, Nat Buchanan. This was a man who did more exploration than most of our celebrated explorers, founded a number of cattle stations and managed to keep his family together at the same time.

In the scrub down behind the camp ground at Roper Bar, Northern Territory, there stands a single marble headstone, propped up with a branch. Beneath this marker lie the remains of John Urquhart, stockman on the Durack cattle drive. He died of fever nearby in 1885, and his grave was marked with a wooden cross. His family later

brought the marble stone up by wagon, and installed it on the site.

The Reverend John Flynn, founder of the Royal Flying Doctor Service, was buried at the base of a hill a few kilometres west of Alice Springs, his grave was marked with a stone from Karlukarlu, or the Devil’s Marbles. This fact angered traditional owners, and the stone was returned in 1996. An alternative rock was provided by local elders, and Flynn’s grave is now a reserve and tourist attraction. 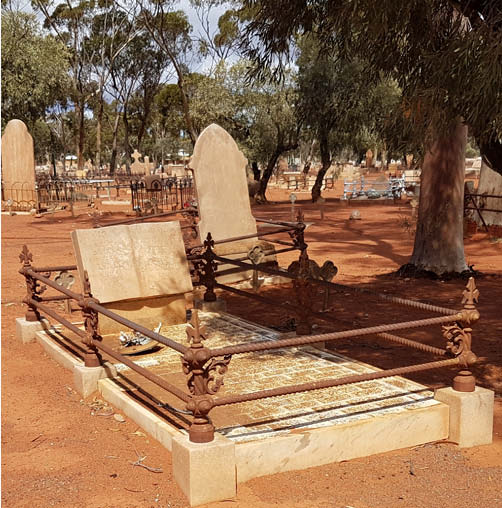 These are just a few examples. There are millions of these stories, often known to their families and few others. Yet, cemeteries aren’t just life histories. They evoke a memory in many of us, of a loved one’s last hours and final moments. When my mother died, my family held vigil over her bedside all through the night, while my remaining siblings rushed to be there. She hung on, moving in and out of consciousness and recognition.

One of my best mates, who had been through the death of his father, messaged me to say that there is a “terrible beauty” in the last hours of a person’s life. He told me to treasure it, and I do.

I feel fortunate that I had this time to say farewell. Yet, so many deaths are accidents or rapid illnesses. When, months later, we placed Mum’s ashes in the columbarium at our local funeral home, I took the opportunity to browse the plaques. Two of the epitaphs I read were for young teenage boys and I asked a family friend, who had worked in the funeral business, what had happened.

One, she said, had been fishing with his father when a thunderstorm hit. They came back to the beach and sheltered under a tree. Lightning struck the tree, and the boy was killed. His sister and father survived. Another had been helping his family drag their sailing boat up on to dry land, out of the river, when the mast touched overhead power lines. He was killed, and the rest of the family spared. 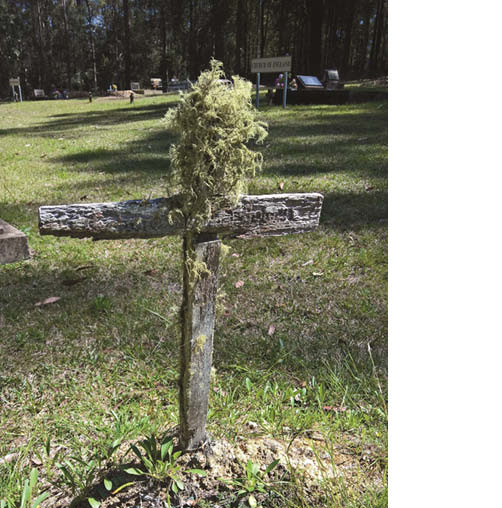 A bare cross with Irish Moss

No vigil, no time to grieve.

In the outback, horse accidents accounted for most accidental deaths, with a sprinkling of murders and drownings. There are no graves in our country cemeteries for the countless young men whose bodies now lie in foreign soils. A visit to small-town cenotaphs will bring the scale of this tragedy to life.

Finally, you’ll sometimes see the loneliest of all country graves, the many, many suicides, though they were seldom marked as such. Often these (mostly) men were not buried in town cemeteries, but outside. Many such tragedies occurred in remote areas, and the dead were interred on the spot.

The most infamous of all Australia’s cattle routes, known for messing with a drover’s head, was the Murranji Track between Top Springs and Newcastle Waters. The bores along the way are surrounded with old graves, most of which have slowly disappeared into the lancewood and bullwaddy.

The important thing about cemeteries is that they remind us as much about life, as they do about death. They remind us of our mortality, and that every day is special, no matter what trials we face. Hopefully I’ll see you in some country cemetery soon, and maybe we’ll both walk away knowing more about the past, and perhaps a little more about ourselves.