LENNY used to reverse his old Fargo 10-ton tipper up the narrow street beside our house so he could unload the sawn-up logs for our winter fireplace.

This often entailed a lot of peripheral damage to neighbours’ nature strips, overhanging fruit trees and sometimes causing dislodged and broken bricks on their front fence.

He wasn’t the most popular delivery man in our neck of the woods at that time, no pun intended.

Once he parked his noisome, black-smoke belching claptrap of a truck, we kids would then have to help Lenny and Dad heave the heavy hunks of wood over the side fence into our back yard.

Lenny used to be able to come right up our driveway so he could tip his load straight on to the path near our woodshed making it much easier for us to stack the logs.

But the last time he did this, he was in a bit of a hurry and he dumped a couple of ton of red and grey gum, ironbark and stringy bark hunks right over Mum’s treasured hydrangea garden.

It took months for them to be restored to their purple and blue-hued beauty.

But Mum never forgave him and that was why and Lenny had to change his point of arrival at our joint.

Once the heavy logs were unloaded into the yard, we’d then have to stack them neatly in piles about three-foot-high against the fence.

When that was done it was my job, being the boy, to chop the sawn-up logs into triangular pieces which would fit into our wood stove in the kitchen. The girls were allowed to put the cut logs into the wheelbarrow for transport to the nearby wood box for storage.

The actual chopping was the hardest part and I’d be exhausted after a few barrow loads. That meant my puny downstrokes became increasing more erratic and feeble and often resulted in the axe blade missing the chopping block altogether causing considerable alarm among bystanders. 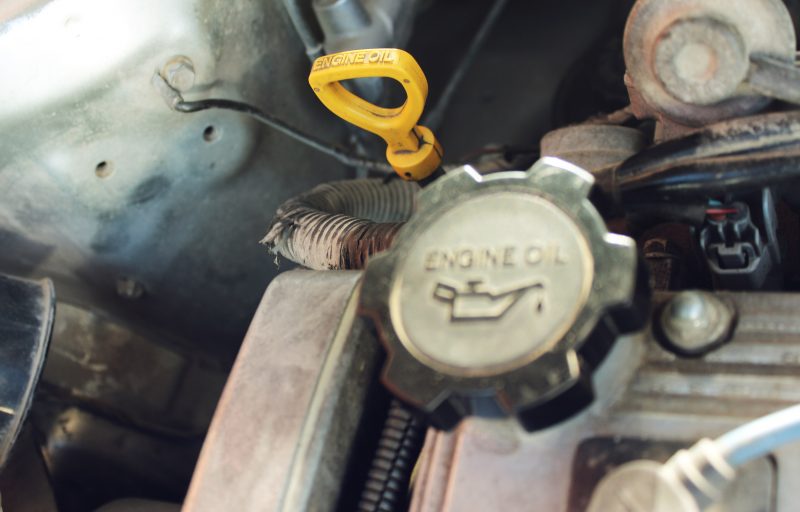 This dipstick’s a bit easier to find than the one on our old ute.

Luckily it missed exposed limbs and my sisters knew well enough to retreat to a safe distance when the ragged ironbark chips started flying off in all directions. As it was Dad’s favourite axe, he wasn’t pleased to see great jagged chunks torn out of the neck of the axe handle either.

But as they say in the classics, “I needed the dough” and the only was I could get the dosh for my weekly pocket money was to complete the task and reduce the pile of sawn logs.

In those days, in the 50s, we all had various odd jobs we were allocated, some were more enjoyable than others.

There was banging a nail in the loose picket on the front fence, hand-mowing the front lawn, trimming the hedge, painting the garage door, weeding and sweeping the backyard, doing the grocery shopping for old Mrs Byrne down on the corner, and keeping your room neat and tidy.

I lost a full fortnight’s pocket money one time when Mum was putting my school socks away in the drawer and found, to her horror, a shoe box with holes cut into the lids and scratching noises issuing from within.

She fled the room in haste and sadly I had to release Freddy the frill-neck lizard, the occupant of the tell-tale box, back into the wild.

In hindsight, I don’t think Freddy really enjoyed being cooped up in the gloomy old box in the sock drawer anyway.

As I grew older the after-school and weekend jobs became a bit more technical and challenging.

I felt really important when Dad used to throw me the keys of the battered old ’40 Chevvy ute and say “check the oil on the ute for me please son?”

“Sure Dad,” I’d say. I’d strut out to our garage swinging the keys around my fingers and pretending I was Bobby McBride, our local Golden Fleece servo mechanic and a source of great hero worship on my part.

It was not only his awesome knowledge of the workings and associated parts and paraphernalia of the internal combustion engine that enthralled me but his black, grease- and-oil-encrusted overalls, his grime-smeared craggy face and the inevitable roll-your-own Havelock tobacco filled cigarette between his nicotine-stained fingers.

There was also the way he could negotiate with ease a mountain of discarded back axles, differentials, exhaust pipes, “pom boxes”, steering wheels, tappet rods, shredded tyres, countless boxes of old sparkplugs and gaskets, deeply rusted tools which looked as if they’d be used on the drilling equipment in the Gold Rush days, dented hub cabs and spoked wheels, from all sorts of car models dating from the T-Model Ford to the FJ Holden.

Back in our garage, I unlocked the driver’s side door of the ute and popped the bonnet using the lever under the dashboard. This always gave a satisfying clunk and prepared the eyes for a veritable cornucopia of motor car engine mystery.

It was a bit tricky getting the fingers under the popped-up hood and engaging the gadget to lift the cumbersome cover and prop it up on its metal supporting rod.

Then I had to clamber up on to the front bumper, reach over the rusty old radiator with its leaking brownish fluid, and locate the dipstick deep within the bowels of the ute’s inner workings.

This of course entailed a decent smattering of dirt, road grime, oil and grease coating my clothes and various parts of my body.

I’d seen Bobby over at the servo connect up the battery-run spotlight whenever he had to grope in the dark entrails of the vehicles under his care.

Mum would have been proud of a display of hydrangeas like these.

But I knew that old grey ute like my own Meccano set, I’d spend hours leaning over the mud-guards   watching Bobby and Dad diagnose the latest malfunction of the ageing Chevvy engine.

Once the dipstick was located and withdrawn carefully from its narrow, dark cylinder, I’d get a piece of clean cotton waste and wipe the oil off, as I’d seen done on many previous occasions.

I’d then re-insert the dipstick back into the hole whence it came, draw it out again carefully, read the calibrated measuring gauge on the stick which basically indicated, FULL, HALF FULL, EMPTY.

I’d then repeat the wiping process, put the stick back, slam the hood back down again with a satisfying clang, just the way I’d seen Bobby do it, and report my findings to a proud Dad while my sisters watched on in awe and Mum cringed when she saw the filthy state of my arms, legs and clothes.

Do you reckon the millennial-product kids of today could carry out those sorts of tasks and experience the thrill that we did as kids, despite the torn finger nails, blisters and bumps and irate Mums?

I don’t think so.

Ah well, I can see that the spreadsheet page on my Lenovo laptop has crashed out…better get the 10-year-old to come and fix it for me.

Main Picture: Dad would have loved this classic Chevvy…