WHY HEATHER KEEPS ON RUNNING FOR HER LIFE! - Go55s
Skip to content

THREE years ago we featured on the front page of Go55s newspaper, the inspirational story of cancer survivor and Sydney mum Heather Hawkins … and how she went on to become a surf lifesaver and ultra-marathon runner who has competed in some of the world’s most gruelling extreme events …JOHN McNAMEE caught up again with this awe-inspiring woman who last year was crowned Australian Ultra Runners Female Champion, 2018…and who is on the verge of tackling her most demanding athletic challenge yet.

When you’re raced across the frozen wastes of the North Pole, ran through the scorching sands of the Sahara, trekked along the Great Himalaya Trail (twice) and competed in seven marathons in seven countries in seven days, an ultra-marathon in the Australian outback might just sound like a stroll in the park.

But for brave cancer survivor Heather Hawkins, 53, this local event is her biggest athletic challenge yet.

In May, this female phenomenon, who back in 2006 was huddled up in a hospital bed with excruciating pain from a massive, deadly tumour in her right ovary, will tackle what’s known as The Track, a 520km run from Alice Springs to Uluru.

“It’ll be the longest distance I’ve ever had to run in an event like this….I’ve run 170kms in a stretch during a similar event before but this will be a new adventure with us having to cover the last 132km stage in the final two days,” Heather told Go55s.

“But what keeps driving me on is the spirit I have, the belief in myself and the memories of how I successfully overcame the cancer and how my life changed completely since then,” she said.

She dedicates each race in which she competes to her family – devoted husband Doug, son Callum and daughter Bec – to all the other cancer survivors and those people still battling the disease and to her fellow surf lifesavers. 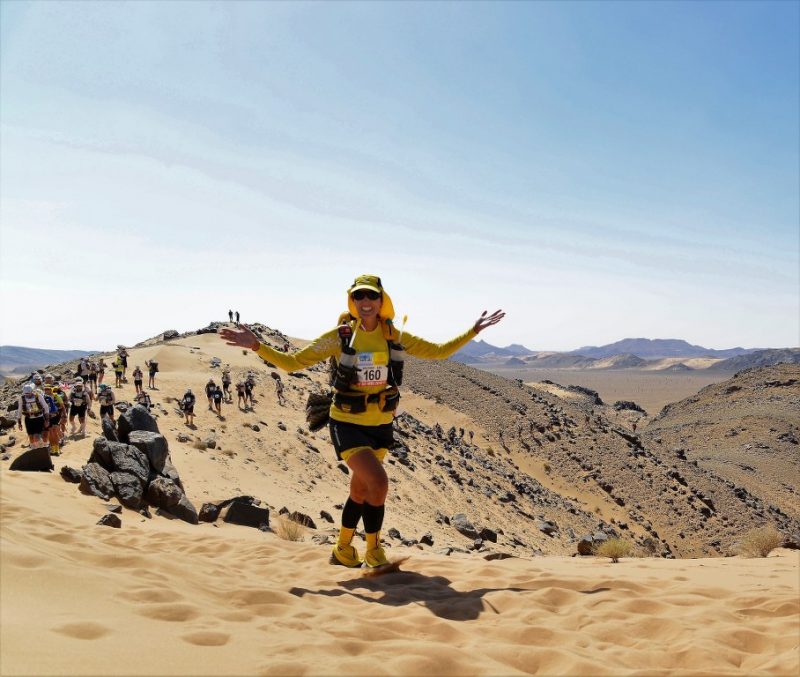 “It just keeps driving me on, it keeps me being positive and strong and I use all this as an inspiration”, says Heather who these days is an Ambassador and tireless fund-raiser for Ovarian Cancer Australia, Can Too, World Expeditions and the Indigenous Marathon Foundation (founded by Rob DeCastella.)

Since her recovery, she has completed six half marathons, 20 full marathons and four ultra-marathons, which included the World Marathon Challenge, being seven marathons across seven continents in seven days in 2016, and the “toughest footrace on earth”, the six-day, 250km Marathon Des Sables, where temperatures in the Sahara regularly topped 40 degrees and where the runners brave mountains, rocky bluffs, sand dunes and the occasional sand storm.

In February 2016, Heather trekked the world’s longest and highest Alpine peak, the Great Himalayas Trail across the mountains and valleys of Nepal, in the shadows of the imposing Mt Everest. The trek covered 1,700kms in 152 days, including 16×6,000m high alpine passes where there was often only 60% oxygen levels.

Her outback saga in May will have its own unique Australian dangers…. extreme daytime heat and night-time cold, rough creek-bed terrains, long, rutted outback roads, as well as kangaroos, snakes and dingos.

But it will also have its memories for Heather which in themselves will be an added spur as she sets out on that muscle-sapping journey.

The Track event starts off in Ellery Creek, a short plane ride from Alice Springs and then heads over rugged outback mulga country and dangerously pot-holed tracks towards the 223km-long Larapinta Trail, then along the Small Pinke River before a night stop off at the famous Curtin Springs cattle station.

“That will be an emotional time for me because back when I was 20/21, I spent a year at the cattle station with Peter Severin and his family as a governess to the children,” Heather says.

“It was all about making sure the kids had their School of the Air work books to study and were listening in to the lessons. What a wonderful time that was for me and it’s just another extra motivation for me on that outback run,” she said.

There’s also another family connection for Heather up there in the Northern Territory wilderness… the course runs through what was known as the Hermannsburg Mission, now the Hermannsburg Community, 130km west of Alice Springs where her father worked and helped out the Aboriginal Western Arranta people back in 1956.

“It will be wonderful for me just to pass through that area which I know was so important to my father back then,” Heather says. 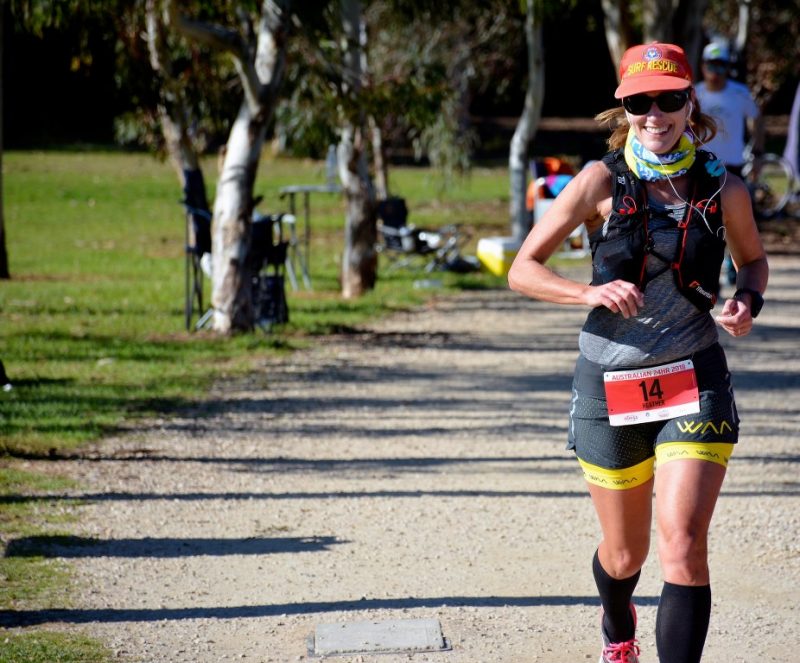 Heather completes the 24-hour ultra-marathon in Adelaide which earned her the title of Australian Ultra Runners Female Champion 2018….

In between her awesome achievements, Heather has also managed to write a book on her life, including her harrowing ordeal with cancer when she was 41, after an aggressive 20cm tumour was discovered in her right ovary and the subsequent non-invasive “surveillance” treatment regime during which she was able to bypass a long course of chemotherapy.

“It was a long gruelling time for myself and especially my family but I always had a faith and belief that I would pull through,” Heather said.

“And I did and it was during my recovery that my husband Doug talked me into doing my Bronze Medallion at Coogee Surf Lifesaving club and that changed my life completely,” she said.

Heather then went on to compete in a Mother’s Day fun run with her kids, and then with only a few weeks training, and at the age of 47, her first 4km running event followed by the City to Surf.

The rest as they say is history.

During all these thousands of kilometres and more than 12 years later, Heather’s been lucky enough not to have suffered any serious injury. She attributes this to her strict training regime, her high protein diet, and especially the “pure joy” she feels in running.

She says proudly she’s never once not completed an event although sometimes the extreme conditions or even something simple like blisters or fogged up sun goggles have forced her to soldier on in terrible discomfort.

“I’ve been very lucky, I’ve always managed to keep my weight down and my mental and emotional attitude positive. I never ever say never and I hope I can keep up that attitude.

“Look, it’s a message I like to pass on to people who have also battled cancer or who are still being treated..I don’t expect people to get up and start running marathons.

“But I have always said that even the simplest of exercise regimes like a walk or a cycle in the park, a stroll along the beach, that sort of thing, can have a wonderful effect and go a long way to helping cancer sufferers. 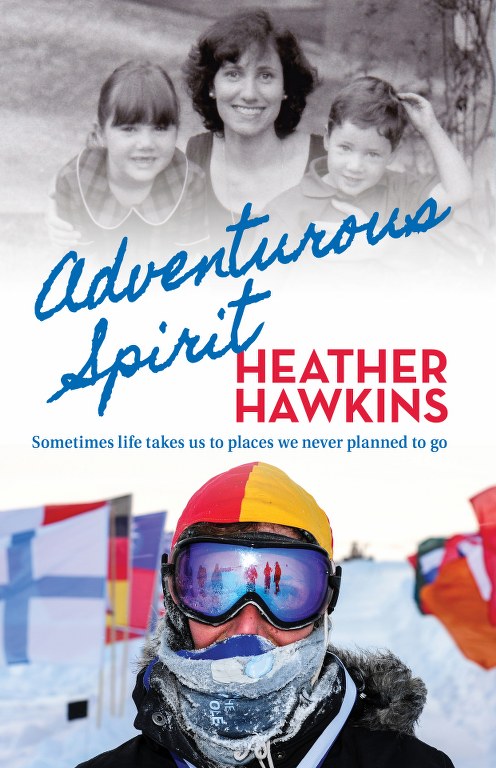 “These days, the cancer researchers have been making amazing discoveries and treatment methods have been improving dramatically. There’s always light at the end of the tunnel, absolutely.

“I’m not sure how long I can keep going with my ultra marathons, but at this stage, I’m looking forward to the outback adventure in May, and who knows after that?

“Part of the success I think comes from the fact that I’m not obsessive like a lot of marathon runners can be..I enjoy it too much and I change my training regimes to include ocean swimming, beach jogging and of course helping Doug out during the training of our junior surf lifesavers.”

And on the weekends, you can still see Heather in her surf lifesaving uniform, helping out in a patrol at her beloved Coogee beach.