THE RIDE OF OUR LIVES! - Go55s
Skip to content

FOR CYCLING….AND ITS TRAGEDIES AND TRIUMPHS

The riders had just set off from outside the old Kelly’s pub in the Melbourne suburb of Oakleigh for the gruelling 225-kilometre Tour of Gippsland cycle race.

It was September 13, 1958. Among the favourites to win the epic event was dual Olympic gold medallist, Russell Mockridge.

He was a crowd favourite, not only because of his amazing cycling feats on the world stage, but his calm, bespectacled face gave him an almost mystical aura.

As the leaders swung around on to the Princes Highway at Clayton, a bus suddenly veered across the road smashing into the front of the pack. 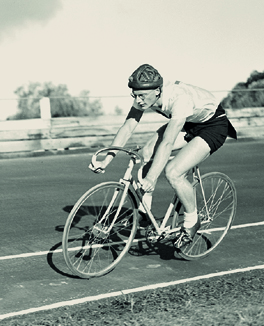 Mockridge was killed instantly, finishing up underneath the vehicle with catastrophic head injuries. Another cyclist tried to drag Mockridge away but he had sustained multiple dislocations to his shoulders and had to be pulled to safety himself.

The 29-year-old champion left a wife Irene and a three-year-old daughter.

The news of Mockridge’s death shocked the nation. Like myself at the time, thousands of young teenage schoolboys for whom Mockridge was a sporting hero, reeled in disbelief.

Because of his bookish looks and modest demeanour, Mockridge was a big hit in our household and Mum and Dad used to pile us all into the old FJ and drive across country to catch a glimpse of Mockridge competing in a popular road race.

After the heady days and heroics of the 1956 Melbourne Olympics, we Aussie kids had found another idol, only to have him dashed from our lives.

“Yes, it was a huge tragedy at the time and particularly as Russell was so popular and hadn’t yet achieved his full potential,” author and former sports journalist Rupert Guinness told Go55s.

“I have no doubt that Russell Mockridge would have gone on to become one of our greatest ever cyclists,” Rupert said.

“He won two gold medals in one day, one in the tandem with Lionel Cox and the other in the individual 1,000m time trial at the 1952 Helsinki Olympics, a rare feat in those days,” he said.

Along with many other sporting highlights, Rupert has covered most of the major cycling events across the world, including the Tour de France, Olympic and Commonwealth Games and world games road and track races, for the past few decades.

He has just published his 14th book, Power of the Pedal: The Story of Australian Cycling, a fascinating and remarkable chronicle of how the humble bicycle first developed here and how it became a vital part of our nation’s recreational and transportation history.

“As I started to delve into the background going right back for around two-hundred years, I just couldn’t believe the wealth of material involved in Australia’s love affair with the bicycle in all its weird and wonderful shapes,” Rupert said.

“It was an absolute voyage of discovery for me and I was amazed at the ingenuity and resourcefulness of the manufacturers such as Malvern Star who put us on the cycling map,” said Rupert, himself a former triathlete, elite rower and ultra-endurance cyclist.

As well as the great compelling human interest stories such as the tragic premature death of Russell Mockridge,, Rupert’s latest book features the extraordinary feats of legendary champions such as Sir Hubert “Oppy” Opperman, a trail-blazing Australian competitor in the 1928 and 1931 Tour de France, (1904-1996), Edgar “Dunc” Gray (1906-1996) and Sid Patterson (1927-1999), to modern-day heroes such as Phil Anderson, Cadel Evans, Robbie McEwen, Kathy Watt and Anna Meares.

There are other fascinating stories of how popular for example, early cycling became with women and how even back in the 1930s true-life sporting feats were achieved. One involved a young lady called Joyce Barry, who was advised to take up cycling to help battle her childhood pneumonia.

Her cycling quickly career took off and she went on to be coached by Oppy himself. She set numerous records including for the September, 1937 Sydney to Melbourne road race, during which she was nicknamed by the press “The Flying Wasp” for wearing a yellow pullover and black shorts. 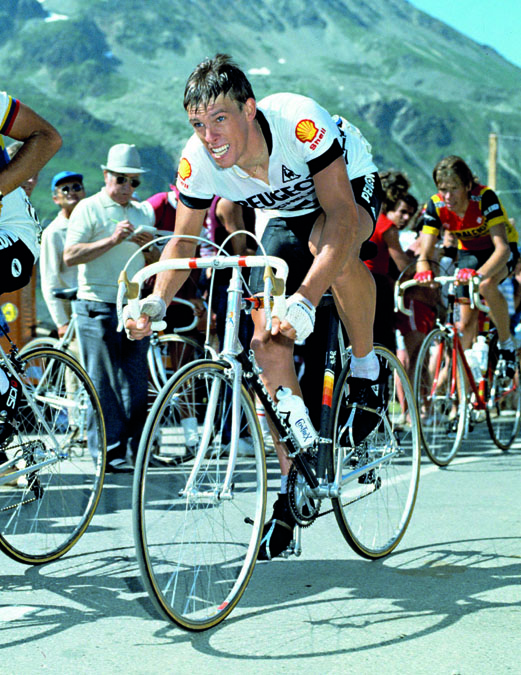 Phil Anderson doing it tough in the Alps….the first Australian to wear the leaders’ yellow jersey in the 1983 Tour de France.

Another of the women ‘overlanders’ was rookie rider Billie Samuel, a diminutive 23-year-old waitress from Victoria who set a benchmark record in 1934 by cycling from Melbourne to Sydney (925km) in three days 17 hours and two minutes…a journey during which she crashed twice and battled strong head winds.

Amazingly, Rupert’s long journalistic career is almost as spectacular as the many champions he has witnessed carve their name in our sporting annals.

“There are many highlights but one of the major ones would have to be when I was a cadet reporter on the Sydney Daily Telegraph in 1981 and the news came in that a cyclist called Phil Anderson had not only become the first Australian to wear the yellow leader’s jersey but also the first English-speaking rider,” said Rupert, who later became a cycling companion of Anderson’s when they both lived in Europe.

“I was actually covering the event in 2011 when Cadel Evans became the first Australian to win the Tour de France, and what a great champion he was. He had his ups and downs over the years but to win that event so long dominated by the Europeans was a massive achievement,” he said.

Rupert says one of the most remarkable discoveries he made during his monumental research for the book, was the achievement of the pioneering “overlanders”, who cycled vast distances across the Australian continent some on primitive machines and in often appalling road and weather conditions.

In his book Rupert writes: “In the late 1880s and early 1900s, the overlander played a great role in the discovery of Australia from around the coastline to the interior of the country….

“By the 1890s, a number of ‘high wheelers’ (named for riding their large wheel Penny-Farthing style bikes) were earning reputations for their adventurous cycling feats. One such rider was Alf Edward, who in 1884 became the first person to ride from Sydney to Melbourne – then a 931-km journey – in eight and a half days, following Sydney Road, later named the Hume Highway.

“Another of the famous ‘high wheelers’ was George Burston, who founded the Melbourne Bicycle Club in 1878 and held the 100-mile (161km) road record until the pneumatic tyre was introduced in 1888. He promoted the tyre in a trip around the world with clubmate Harry Stokes on penny farthings that began in November of that year.”

Rupert, who got the cycling bug as a youngster riding around Centennial Park in Sydney on a Chopper Dragster with his father, admits the book was a worthwhile labour of love.

He even accomplished an ultra-endurance, 5,471km-27-day epic feat of his own last year cycling from Fremantle, WA, across the Nullabor, through SA and Victoria to Sydney, with a group of mates to commemorate the memory of well-known English rider Mike Hall who was killed in a similar ride the previous year.

“It certainly gave me a great understanding of what the cycling pioneers of Australia endured and achieved, and on far more basic bikes to the ones these days,” Rupert said.

*The Power of the Pedal: The Story of Australian Cycling. By Rupert Guinness. NLA Publishing. RRP $39.99.

Main picture: Billie Samuel arrives in Martin Place in Sydney after her epic 1934 ride from Melbourne.