WHEN IT CAME TO A NEW TRICK, BOSSY WAS AN OLD DOG FOR A HARD ROAD! - Go55s
Skip to content 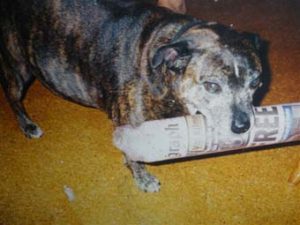 WE used to have a venerable old brindle Staffy terrier called Bossy who loved nothing better in life than finding new ways of discovering food.

So to humour him, and to keep his ageing canine cognitive functions operating at full power, we’d devise various strategies in which he had to use all his skills to locate the various items of tucker secreted around the kitchen.

As soon as he heard his bowl being taken from the cupboard, he’d galvanise into a frenzy of body-twisting, jaw-snapping, tail- wriggling excitement during which anyone else in the immediate area was at risk of being upended over the nearest item of furniture.

The larger items, for example a lamb shank (his particular favourite), were usually easy pickings for an animal with such an acute nose as Bossy and he rarely took more than a few minutes to hunt down  his prey lurking behind the recycling box or the wine rack and demolishing it rapidly in a paroxysm of chaotic chomping.

But with smaller items of delectation, for example, doggy biscuits or Juicy Cubes, we employed more cunning and underhand tactics.

We’d hide three or four of the items around the room in much more difficult locations, for example, under the cushion covers, in the surf board bag, in the bottom shoe rack, under the CD box and stand back and watch his excited frenetic searching.

After a while, he began to realise (do dogs “realise” things?)  that we never ever put fewer than three biscuits around at any given time so after he pounced on the first two, he’d continue his eager quest, scouting and sniffing noisily around the room until, Eureka!, he unearthed the final morsel.

We knew then that Bossy had learnt to count and we were ecstatic that he’d expanded his mental capacities to such an extent.

My purpose in recounting this tale which wagged the dog (oops sorry!!) is to prove that Bossy was able to live an energetic active life well into his declining years, and I guess it’s a lesson we humans can all learn.

Nothing distresses me more than seeing people of my own age wandering aimlessly about, refusing to do any structured exercise regimes, just passing time before they head to the pub.

The moral is: yes, you CAN teach old dogs new tricks and the above preamble resulted in reading a press release from National Seniors Australia (NSA) headed “Older Adults Still Have A Thirst To Learn”.

I hope you’ll forgive the reference to we senior people as “old dogs”, but I thought, well if Bossy can do it, and basically he was only part-dog-part-human, learning something new in life for us does not have to be confined to the younger generations.

Peter Matwijiw,  NSA general manager of policy, and the author of the report, Later Life Learning: Unlocking the Potential for Productive Ageing, told Go55s that virtually nothing had been done on a national scale to implement among older people the benefits of further education.

“We need a national policy set up by the government to address the issues of older adult learning which is not being treated seriously enough at this stage,” he said.

“There are not only the benefits to employers for providing training for older workers but a study of older learners has shown that 80 per cent reported an improvement in life satisfaction, self-confidence and self image.

“Engagement in learning and education is also linked to economic, social and health benefits, especially in the older age groups, but compared to other countries, there is much more we can do,” Mr Matwijiw said.

He said there were three main ways that educational and vocational opportunities for older people could be expanded:

Informal but structured training, such as University of the Third Age (U3A), where older people who are geographically, physically or socially isolated can sign up to online courses which are run by groups which offer their own expertise and knowledge in various subjects and life experience.

Informal learning such as that gained from volunteering or community work.

“We feel that not enough is being done at the national level to encourage this later learning which has so many social and personal benefits and not only improves the mindsets of older people but makes them more valuable members of the community,” Mr Matwijiw said.

“There’s just  not enough investment in learning and educational opportunities involved at the government levels and that means Australia is missing out on increased productivity and improved wellbeing among older adults.

“Countries such as Sweden for example can boast about a 65 per cent involvement  of senior people in further learning and workplace situations while here in Australia it’s not much more than 20-25 per cent,” he said.

He stressed that research showed that the benefits of later learning included: prevention of social isolation through networks and connections with other individuals; improvements in mental health and the avoidance  of diseases such as Alzheimers.

There were also the benefits of providing more knowledgeable and skilled employees in the workplace.

“As the government moves to increase the age where people can claim the pension, then it only makes sense to ensure that more and more eligible older people get further educational and employment opportunities,’’ he said.

The message of all this then for me is never let anyone (for example your kids who reckon they know it all anyway, or those mates who spend most of their days playing Keno in the RSL) convince you that once you’ve reached the retirement age you’re over the hill and incapable of nothing more intellectually stimulating that shuffling around a golf course or jumping in the Winnebago and driving across the Nullarbor.

I mean even old Bossy, were he still around today and sadly he is not, (although we still have his battered food bowl and biscuit box plus various half-masticated items such as what were once tennis balls and footy socks) knew a thing or two about keeping his crowded canine mind ever-active…well he had to didn’t he, or he would never have found those Juicy Cubes behind the Foxtel box!