With Australian cities continuing to evolve into groaning hubs of concrete, neon and skyscrapers, there is something particularly alluring about heading out to an old-fashioned pub.

Great Aussie pubs have a reputation for hosting regulars relaxing amid those dignified wooden walls. There is a comfort in chatting to a bartender who knows the locals’ favourite tipples.  Australia’s oldest pubs that are still going today are supported by staff that respect and appreciate the incredible history around them, from local yarns right back to the Rum Rebellion and other epics of times gone by.

Many of Australia’s most iconic hotels have been lovingly preserved retaining the charm that so many pubs were known for more than a century ago. These destinations are a must for a bar lover, history buff or anyone who wants to explore a bygone era. 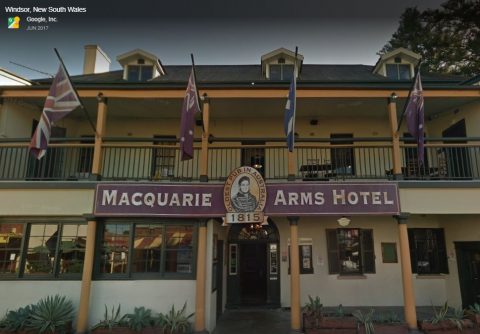 Been to the Macquarie Arms Hotel?

What better place to start than a bar that Go55s has celebrated before? The Macquarie Arms is one of mainland Australia’s oldest pubs, built in 1815 just north of Sydney on the banks of the majestic Hawkesbury River.

When Governor Lachlan Macquarie discovered this region, he settled and ordered a two-storey inn built. Convicts built the bar by day, sleeping in the cellar by night. Their guards slept in an upstairs area which later caught fire when it became accommodation. Knowing the building intimately, convicts were able to smuggle rum through underground tunnels, before two blew themselves up. Ghosts from these incidents are said to still dwell the Macquarie Arms, along with a 7-year-old Mary. 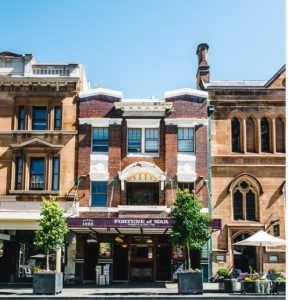 Southward in colonial The Rocks is Sydney’s oldest pub –  Fortune of War – a buzzing attraction that was built by the thief-turned-mogul Samuel Terry in 1828. It became a local for generations of soldiers the night before they shipped off to war. After a hundred years it was rebuilt to its current polished, glorious form. For a real heritage experience, visit on Anzac Day when veterans gather to celebrate freedom and remember the fallen.

Image: from Fortune of War

Corner of Essex and Gloucester Streets, The Rocks, Sydney

Another of Australia’s oldest pubs is a short walk from Fortune of War in The Rocks.

Harts Pub started out as a private residence before it began to sell beer. And like Fortune of War, Harts Pub was demolished and rebuilt with its former beauty in mind. It soon became a destination for gourmet travellers and is famous for its craft beer, with 12 taps of rotating amber. A Medieval style wooden tavern sign hangs out the front, proudly reminding punters that this bar is history and doesn’t intend to modernise its historic appeal.

Meanwhile in Melbourne, one of the most famous local pubs – The Palace Hotel – is a microcosm of Melbourne city. Its humble exterior is grey, a classically elegant building of pillars and bricks with bright red doors that hint something more interesting is going on beyond the facade.

The interior is unpretentiously welcoming, with staff of all ages and an enthusiastic acceptance of children and pets. Along with its wide sports coverage and you’ll find the Palace is what a pub was always meant to be, a place for the whole community to relax and find out the latest over drinks. 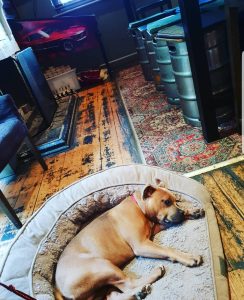 The Palace is reputed to go mad during AFL season. In a suburb that was once Melbourne’s pub hub, this pub has resisted the wave of bars turning into priva

te residences. The Palace is also famed for delicious meals.

You must see Chloé, Melbourne’s most iconic painting kept upstairs in the heritage-listed Young and Jackson. This Paris model has been a feature of Young and Jackson since 1909. This popular pub on the bustling corner across from the infamous Flinders Street Station clocks, quickly fills up on Friday nights and weekends. It’s a classy junction on the way to other, even older pubs.

Although Melbourne itself is younger than some of Sydney’s pubs, its oldest building is now a beloved bar. The Mitre is not much further than a decent stumble from the celebrated Young and Jackson’s.

After some time as a house, it started trading with a liquor licence in 1868, and has continued pouring beers ever since.

Shortly after opening it became a meeting place for legendary dog clubs, hunters and gentlemanly sportsmen, along with a who’s who of early Melbourne lawyers. The Mitre has kept its upmarket mood, but has gained a reputation as the place for regular people to watch the city sunset from the Beer Garden. The hardware chain Mitre 10 was named here when a couple of the founders decided they liked that ‘mitre’ was also a hardware term. 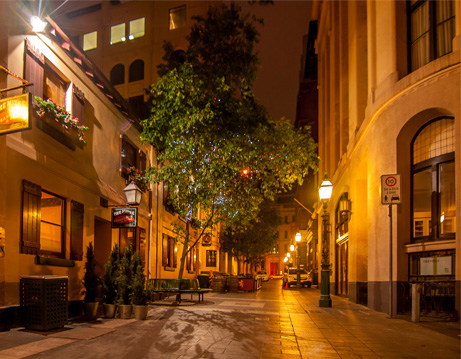 Feeling adventurous? The real charm is in the outback. Take some proper time off and visit a few of the most remote, colourful watering holes Australia has ever known — which have barely changed since their doors blew open to the public.

The Gully is probably Queensland’s oldest pub and is everything an outback pub should be. Its doors opened in 1864, as written proudly on its tin roof, on the Moonie river about 500 km west-south-west of Brisbane. The pub is still in its original condition. Guests are welcome to hunker down with a swag and spend the night on its Colonial style verandah. For campers, the showers are free. Despite its remote location, The Gully manages to book regular live music and host events like the annual pig races (which is exactly what it sounds like). Accommodation is available when a day trip is out of the question! 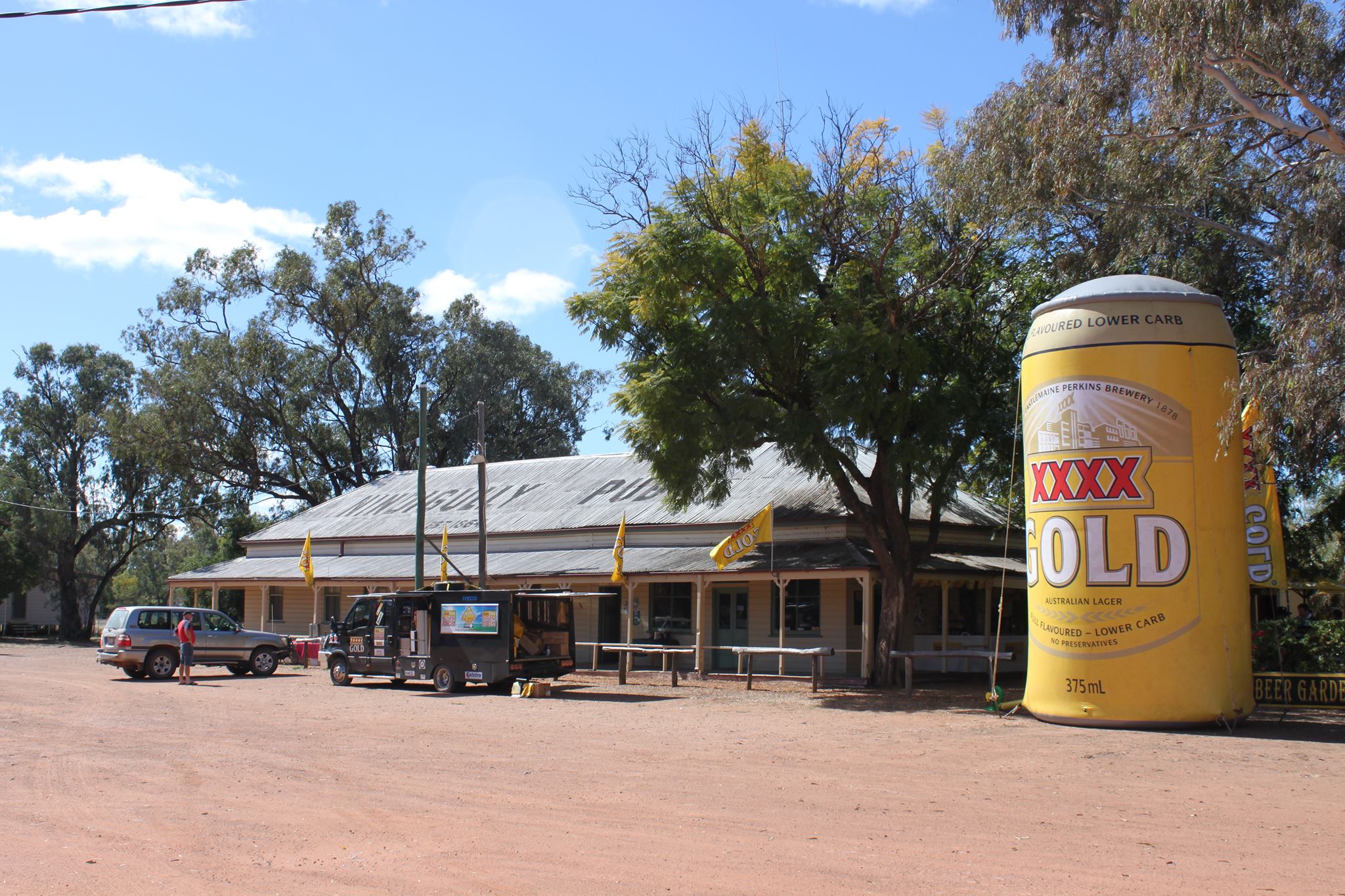 Everyone needs to experience a beer at the Birdsville Hotel. If you’re willing to travel as far as the Nindigully Pub, then just keep going (after enjoying a few days at the Gully! A couple more days’ drive west is the Birdsville Hotel on the edge of the Simpson.

This cool drop of water in the desert is a white sandstone building constructed in 1884 and has stood its ground through cyclones that tore away everything not made from rock. The sandstone is local, a lucky find since wood doesn’t grow in arid Birdsville where sand dunes loom 30 or 40 metres tall! While many people look for peace in the desert, the Birdsville Hotel is set up next to an airstrip.

Pack a massive load of water and a gas stove, then follow the dunes at the Simpson Desert’s edge and keep heading north to Daly Waters, south of Darwin. Like many outback pubs that keep the village supplied, it’s a post office too.

But Daly Waters has a strange tradition: hanging from the top of the bar is a forest of bras, left behind by guests over decades. An online search will have you discover hundreds of pictures of young bartenders taking orders beneath the straps and behind a bar literally covered in stickers. Built by Bill and Henrietta Pierce in 1930, the Daly Waters has a rough and tumble history including stampedes and a Wild-West-like shootout in the street. There’s still a ring outside to tie up your horse. Locals believe the bar is haunted but can’t decide on whose ghost it is. 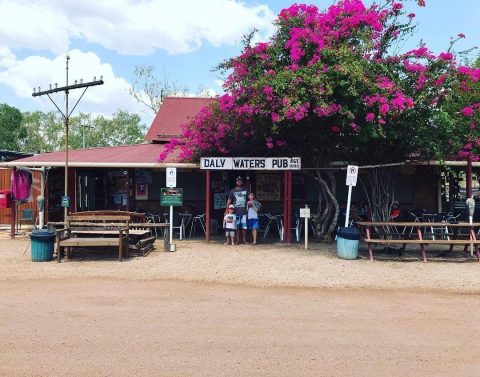 Or perhaps you want to head north from Nindigully? The pub featured in Crocodile Dundee is much the way Hollywood left it, apart from a wall of movie memorabilia. This local is a mix of sturdy polished wood and good old country tin, so that from the inside it looks like an English-style public house and a shearing shed rolled into one.

A sign announces that they have beer, ice, EFTPOS and that it’s one of those outback pubs with its own caravan park, ready for other travellers who make the pilgrimage. And my favourite detail of all: according to one reviewer, they don’t allow mobile devices at the bar.