The small open banana boat nosed its way gently above the sharp-edged shoals of coral across the shimmering aquamarine waters of the Roviana Lagoon.

There was an eerie stillness with only the flocks of gulls and terns flitting overhead disturbing the tranquillity.

Up ahead we could see the palm-fringed, jagged coral fringe of the small tropical island.

In the background, and almost covered by drifting cloud, was the mighty loom of the extinct volcano, Mt Kolombangara.

Billy, our navigator/pilot/local guide, suddenly killed the 40hp Mercury outboard and we drifted further in towards the rocky shore.

All we could hear was the lapping of the water as the bows began to nudge up the shallow beach.

Suddenly Billy stood up in the back of the boat and began calling out in his native Pidgin language.

He was asking permission of the long dead chiefs for us to come ashore.

For this was sacred ground to Billy and our other local tourist guide, Brenden Mautoa.

It was Skull Island.

According to local beliefs, visitors to the island could be in mortal danger if they visit the sacred place without the permission of the village chiefs.

It is the centuries-old home to the tribal elders whose skulls have been placed in specially-carved open shrines among the thick jungle growth.

Below them are the skulls of their enemy warriors, slaughtered by the head-hunters. 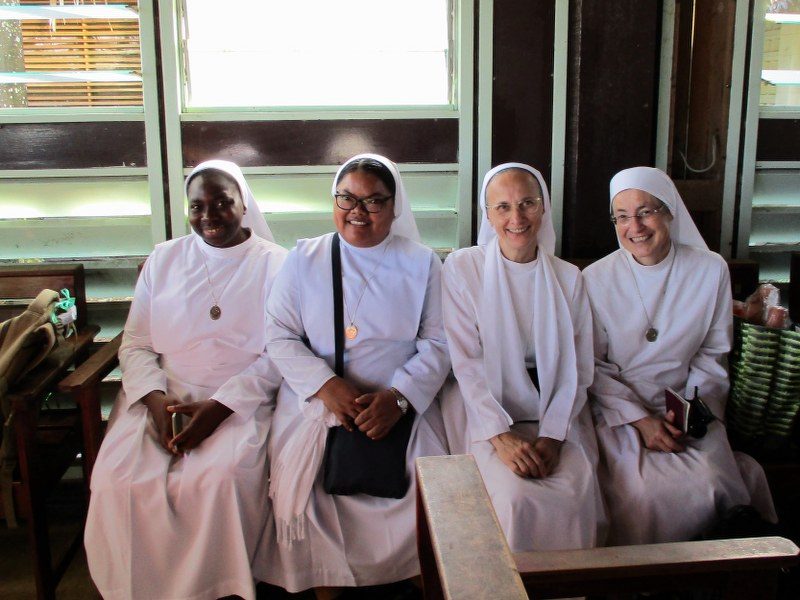 (Amazingly, there are reports of head-hunting still being practised in the area as recently as 50 years ago. Billy says the most recent skull in the island grotto only dates back to the 1930s.)

The elaborate shrines are also decorated with traditional shell money and among the thick undergrowth are the delicately carved caskets of many traditional tribal chiefs.

Almost hidden among the tangled vines and gnarled mangrove branches, are several graves, marked with a cross, of tribal chiefs who converted to Christianity back in the late 18th and early 19th centuries when European missionaries and traders first landed on the islands.

We were in the New Georgia region of the Western Province of the Solomon Islands which lie north-east of the top of Australia, a seemingly remote archipelago but yet only a three-hour flight from Brisbane.

The Solomon Islands became an independent island-colony from Britain in 1978, and although plagued by bloody civil unrest about 10 years ago, is now, thanks to cash injections from Australia and New Zealand, well on the way to clawing its way out of its “developing country” status.

We’d stayed a night in the region’s steamy capital Honiara at the first-class Heritage Park Hotel about a 15-minute drive over the mainly unsealed main road from the airport and marvelled at the way our Tourism Solomon’s guide/mini-bus driver Andrew, negotiated the chaotic traffic, suicidal pedestrians, the haphazard roundabouts and absence of traffic lights along the way.

Honiara can safely be called a city teeming with life, heady aromas and vivid colour. It’s market day every day and from 6am to 6pm hundreds of people, many coming from outlying islands in open boats and dugout canoes powered by small outboard engines, bring their wares along to sell.

Yams, panas, taros, pineapples, bananas , pumpkins are among the piles of fruit, vegetables and fish along with traditional handicrafts all set up in endless lines of shambolic stalls.

Honiara is on the edge of the Guadalcanal , one of the archipelago’s largest islands, and scene of some of the bloodiest battles of World War II and nearby are several memorials and museums dedicated to both the US and Japanese dead.

It’s staggering to realise that during the campaign to capture Guadalcanal, the Allied losses numbered around 7000 men, 29 ships and 615 aircraft. Japanese casualties were about 31,000 killed, 1,000 captured, 38 ships and over 700 aircraft. 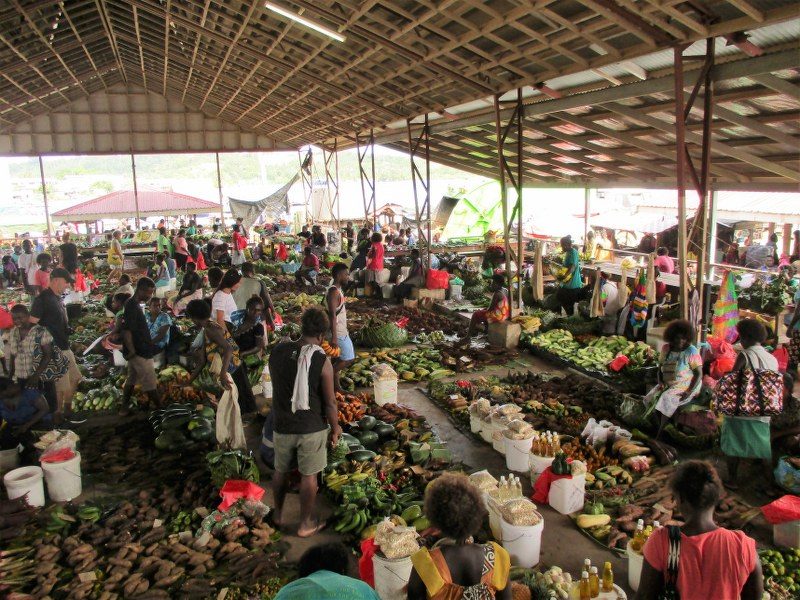 On our jaunts around the islands, we were joined by two Australian deep-sea divers, including well-known underwater photographer and author Nigel Marsh. They regaled us with exciting stories of the many war wrecks which lie below the surface of the brilliantly hued blue waters.

We were also able to check out some surf breaks along the island reefs but locals tell us you need a northerly blowing and when we were there it was a gusty southerly. Only for the adventurous board-rider!

There was also a group of Australian game fishermen who were based on the island of Isabel and boasted of fish catches, mainly tuna, of a couple of hundred kilos a day. Even our little travelling group was able to bag some good-sized wahoos from off the open boat near Mbabanga island!

Meanwhile, another bumpy ride to our next destination across the unsealed back roads of Honiara where Andrew and his fellow motorists have to zig-zag their way along the rump-jolting pot-holed surfaces.

(In some areas, the local kids fill the potholes and you have to pay them five Solomon dollars (about $A1) for “rite of passage”! You can also buy a massive bunch of bananas from one of the many roadside stalls for the same knock-down price. You won’t taste bananas like that back home.)

We were heading to the famous Peter Joseph WWII Museum, otherwise known as Barney’s Shed, along a winding jungle track off the “main” road.

Some years ago, Barney Poulson, whose father was Norwegian, was exploring the hills around his farm and came across a dog tag belonging to US Navy personnel Peter Joseph Palatini.

That led Barney on a decades-long hunt among the foxholes and bunkers in the nearby jungle where he unearthed a treasure trove of military hardware and mementoes which he now proudly displays in the shed.

He was digging out a foxhole one day when he discovered the intact skeleton of a Japanese soldier still holding an unexploded grenade.

Barney, with the help of the US authorities, was able to get in touch with Peter Joseph’s family in the US and arrange for the dog tags to be returned to the old soldier, now in his 90s.

For this leg of the week-long journey we boarded a Dash 8 aircraft from Honiara to Munda, which nestles on the Roviana Lagoon. It was our setting off point for a couple of days of spectacular sightseeing and scenic boat rides to nearby coral atolls…straight out of the pages of a James A. Michener tale. 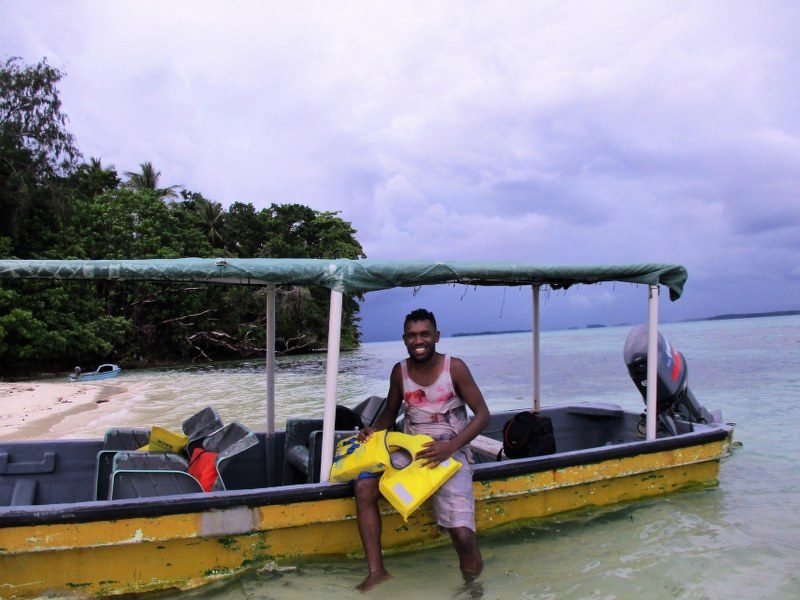 Just a short boat trip from Munda, we were able to spend lazy hours snorkelling among the  glimmering coral outcrops of  Hopei and Mbiki islands, with tiny rainbow fish darting about in front of our masks  and slender white-tipped reef sharks (a harmless species to humans) seemingly playing tag with us among the larger rock formations.

At Munda, we were guests at the Agnes Gateway Hotel, a short dusty walk from the airport, which provided excellent island hospitality and sensational food, a highlight being the barbecued lobster and sweet potato wedges with pumpkin.

It has a quaint charm but the hotel was undergoing reconstruction and rebuilding and the rooms we had were comfortable but pretty basic with no mosquito nets and with hot water a rather haphazard commodity.

But all that’s all forgotten when you settle back at night in Agnes’ jungle-themed bar/restaurant with a cold local Solbrew lager in your hand and the grinning ukulele boys in their gaudy shirts  entertaining you with some traditional island songs!

*The writer travelled as a guest of Tourism Solomon.

Main picture: Sacred: The skull shrine on Skull Island….the chief’s heads are in the casket while those of their enemies are scattered below.