Footy Fever and A Muddy River of Wonders! - Go55s
Skip to content

It wasn’t looking so good. We were seven points down with just as many minutes left to run and we couldn’t get our hands on the pill.

We didn’t come almost a thousand kilometres on this school holiday weekend to visit one of the sporting icons of the world, among other things, just to suffer a disappointing defeat.

After all, I’d promised the wife that she was in for an experience of a lifetime. I’d taken her along with other members of the family to the home of Aussie Rules, the majestic Melbourne Cricket Ground, better known as the MCG and more affectionately, just as the ‘G.

We were up in the ‘Gods’, on Level Four, looking down the dizzying heights to the manicured green grass of the pitch vividly outlined with its bright white lines and fluttering goalpost flags.

Where else would you go when you were in Melbourne on a fairly chilly mid-winter day?

And along with almost 70,000 vocal fans we were seeing two of the traditional rivals, Collingwood and Essendon, battle it out for 100 torrid minutes of helter-skelter football.

As the ominous dark clouds rolled over, the massive floodlights flickered on to their maximum glaring intensity, adding a spectral atmosphere to the crowded yawning stands.

Now you can tell me about those other great arenas of gladiatorial combat.. Yankee Stadium, Madison Square Garden, Wembley Stadium, Twickenham, the SCG, Sydney’s Olympic Stadium, and  going back a couple of thousand years, the ancient Romans loved gorging on the gory spectacles in their  blood-soaked Colosseum.

But nothing compares to the high-octane, blood and guts excitement of tens of thousands of vociferous footy fans barracking for their beloved ‘Pies or Bombers, Kangas or Tigers, Demons or the Carlton Blues on a pulsating afternoon at the mighty ‘G.

On her first visit to the ground, I told the wife there’d be three major experiences even before the first ball was bounced …. the surge and hubbub of the thousands of people milling along the wide promenades towards the yawning gates in the towering concrete sides of the massive stadium.

Secondly, she’d never forget the eye-boggling sight as she climbed the seemingly endless flights of stairs and stepped out of the ‘tunnel’ to be greeted by the awesome spectacle below.

And thirdly, the deafening roar of the huge crowd as the blast of the hooter signalled the start of the game and the field umpire held the shiny, scarlet-coloured Sherrin football high above his head while the jostling ruckmen pranced and bumped against each other, waiting to contest that first important bounce. And then the Big Men Flew, as they say in the song!

The three hours pass quickly and after the game as the stadium’s inner gates are thrown wide open and, win or lose, as you make your way out to walk back to your hotel along the muddy old Yarra river, you know you’ve added a vivid memory to your lifetime’s store of great moments.

And speaking of the Yarra, I describe it lovingly really, because it is as vital an artery in the Melbourne landscape as the Seine is to Paris, or the Thames to London.

Here we go, I hear you say, you’re going to say the heady, bustling banks of the Yarra Southbank remind you of the fabulous French capital.

But it’s true…particularly at night as the towering office skyscrapers which line the river throw down their glittering array of multi-coloured flashing luminosity onto the slowly flowing water.

Jugglers, tumblers, buskers, street artists, hustlers, strollers, happy family groups and lovers  contribute to the continental atmosphere. The cafes, pubs, food halls, trendy shops, all add to the frenetic mix and transport you to another world. 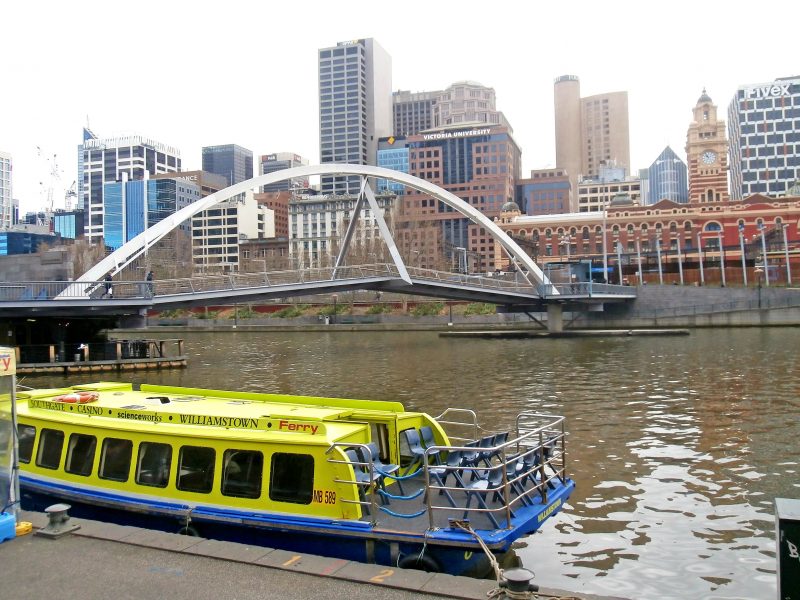 Splash of colour on one of Melbourne’s spectacular street flower stalls.

On the other side of the river, across from the iconic Flinders Street railway station, are the many shopping centres, cosy, dimly-lit laneways lined with moody coffee shops and ‘bijou’ boutiques. Nearby is the famous Young and Jackson’s pub, with its internationally known painting of the lissomly naked Chloe.

We were staying at the Accor group’s Quay West Apartments on Southbank Avenue where we had a wonderful modern unit with the bedroom windows looking out over the river to the lofty spires of St Paul’s Anglican Cathedral and the soaring high-rise office blocks of the prosperous Victorian capital.

We were a short walk outside the hotel door to the impressive Hamer Hall auditorium, home of the Melbourne Symphony Orchestra among other well-known music groups, and the nearby imposing Arts Centre.

Colourful street markets lined St Kilda Road on the Sunday morning, and despite a sprinkling of wintry rain, hundreds of eager ‘treasure hunters’ sauntered along the stalls all offering their weird and wonderful wares. Red-garbed, friendly city “ambassadors” were always on hand to guide you in the right direction.

Armed with our vital Myki travel passes, we took one of the city’s famous trams down to the breathtaking Shrine of Remembrance and its Eternal Flame and marvelled at its adjoining Poppy Memorial dedicated to the fallen heroes of World War I.

Emboldened with the ease and comfort of the wonderful tramway system, we ventured further on the route to St Kilda beach itself, only to be met by frigid, buffeting winds and nasty choppy seas and so we scurried back to the nearest tram stop and headed back to town through picturesque Albert and Middle Parks.

Melbourne’s sprawling inner-city area is a fare-free zone on the trams and you only need the Myki pass for the longer trips and on the rail network. Traffic flows freely and easily along the wide boulevard-style streets.

You can’t deny Melbourne has a wonderful, magnetic charm and, frankly, its ever-changeable weather seems quite tolerable. We didn’t need the extra layers we’d packed so carefully!

Just to walk along the river in the early pre-dawn darkness and see the dedicated rowers lugging their spindly, slender craft out of the sheds down to the water’s edge had an appeal of its own. Some of the blokes clambering into the eights on the icy waters were as old as I am. “You wouldn’t be dead for quids would you mate,” one old stalwart grinned at me as we passed by.

Famous rowing clubs such as Melbourne University, Caulfield Grammar, St Catherine’s and the Mercantile, all boast a long sporting and Olympic heritage, which is dramatically illustrated by the gallery of photographs along their historic walls.

The city itself is surrounded by beautifully-kept parklands such as the Alexandria and Treasury Gardens, with impressive fountains, historic statues and modernistic sculptures.

As we were on a short-stay visit, we didn’t venture much further than the Southbank area which gave us a chance to really concentrate our sightseeing time.

And what happened in the game? Luckily, one of Collingwood’s elusive young guns banged through three quick ‘majors’ and we walked away happily with a 16-point win.

We were still smiling a couple of hours later as we tucked into some sizzling pizza and pasta and toasted the black and white heroes with a glass of heady house shiraz at the riverside BearBrass bistro and promised ourselves we’d definitely made a return trip to the ‘G!

*Author’s Note: My Dad was born in Collingwood back at the start of the previous century so I was destined to be a lifelong ‘Pies supporter from the time I could pick up a battered old Sherrin. But as longtime loyal Sydneysiders we’ll always have a soft spot for the Swannies!

Main Picture: Floodlights cast an eerie glow over the vast expanse of the MCG as the two teams prepare for battle.