Many of us dream of saying goodbye to everyday life and travelling the length and breadth of this vast country we live in. Some manage a trip away once or twice a year. “Grey Nomads” hit the road for months on end. But what’s it like to live the gypsy life full time?

In 2014 Jenn and her partner Jeannette were living in Bonville, a rural area near Coffs Harbour, New South Wales. Jenn, a popular Australian author, was two years into a four-book publishing deal with Simon & Schuster. Her focus was on writing about small towns and travel had always helped inspire her storytelling. Jeannette was (and remains) an integral part of the writing process: proof reader, supporter, sounding board and editor. 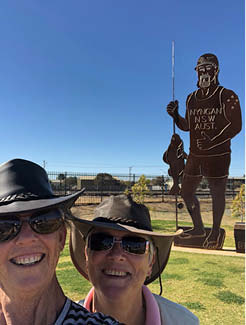 Every town has something special – The Big Bogan Nyngan NSW

What would it be like, they wondered, to travel around in a caravan, fifty-two weeks of the year, writing stories and connecting with readers?  It sounded perfect: seeing new places, meeting people, collecting ideas and dropping in on Writers Festivals, but what’s it really like? What makes two sane people decide to take the plunge and leave their settled lives behind.

The decision wasn’t made lightly. Selling their small acreage was a big step. They replaced it with a Ford Ranger tow vehicle and a twenty-five-foot van connected in a “fifth-wheel” arrangement. The next problem was trying to fit a household of goods into limited storage space.

Surprisingly the pair left very little stored with family: a few boxes with keepsakes, photo albums, old LP records and some home-making basics. Excess clothing and furniture was sold or given away.

“Being fully mobile in Australia,” Jenn says, “does require a certain amount of ‘stuff’ and we had to allow for that in the van. For example, we knew that we’d need clothing for different climates. But we address this by utilising the friendly services of local op shops. We needed puffy jackets for Victoria, so we found one each (at the bargain price of $10) and before leaving for the northern states a few months later, rather than find a space in the van, we donated the garments back to the op shop.”

While they were careful about not exceeding their towing capacity, the one essential they made allowances for was stocks of Jenn’s books so that she has plenty on hand for book-loving nomads she meets on the road, or to offer for sale at author talks in small-town libraries.

Newly downsized, and ready to travel. Jenn and Jeannette had to come to grips with driving what was basically a heavy vehicle. The pair decided that Jeannette would take on the role of driver, while Jenn navigates and spots photo opportunities for her author “presence” on social media.

Jenn admits that, “When it comes to reversing, we have good days and bad days. No two van sites are the same and sometimes we have to accept that our arrival is “happy hour” entertainment. Like driving, reversing also takes two and we have ‘our system’, which includes two-ways – also called ‘marriage-savers’ – that I use in conjunction with my secret stickers. We also learned the essential ‘left-hand-down/right-hand-down’ technique. All this combined means I can guide the driver without the flailing arms with indecipherable gesticulations and sounding like a fishwife. Inevitably, we get to enjoy the entertaining parking practices of others, because the one thing about caravanning is you have to get used to being watched. On the flipside, you get to watch others 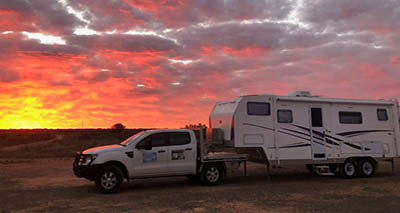 and find characters for novels in the caravan next door.”

Both women admit to finding the learning curve steeper than expected. Yet, after four years and 70 000 kilometres, I was interested to see how the mobile lifestyle has worked out for them.

“To be honest,” says Jenn. “There are not many downsides to being without a home base, except if we need to park the van for an extended period, like if one of us was to need ongoing medical treatment. Even in 2014 (we were 54 and 59 when we hit the road) access to care in remote areas in this country was something we thought about, as well as considering how we’d cope with the physical elements of caravan travel with each passing birthday!”

“The interesting thing about the last four years on the road is we are now fitter and healthier than ever. We walk more, even if it’s around the van park several times a day and back and forth to the loo. (The older we get the more we walk there!) We’ll walk into a town every two days to buy groceries rather than drive and shop big once a week. We also eat less packaged food. (We do have a wine cellar under the bed, though!)

I asked Jenn whether the lifestyle has made a difference to her writing.

“The small-town settings in my first four novels are fictional fusions of favourite places, which let me picture them as I wrote. A Place to Remember (Jenn’s most recent novel), would not be the story it is if I hadn’t written it while camped in the middle of a paddock on a fifth-generation cattle station in central Queensland, the one that inspired the setting. With my days spent mostly outdoors, since hitting the road in 2014, I’m more aware of the sights, smells, sounds, textures and, even the taste of something as everyday as a walk along the beach, or country lane. Every day I’m finding new ways to describe something and that’s impacting positively on my story telling, making my novels a more immersive reading experience.”

Jenn, however, doesn’t write when Jeannette is driving. They have a rule, “All eyes on the road.” That means no writing for Jenn and no fiddling around with social media. This takes away a lot of productive time, given also that it’s hard to arrive at a new town and immediately lock yourself away and write. As everyone who has stopped in a new town knows, having a look around is an irresistible urge. 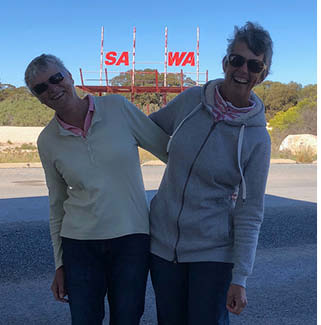 A trip from east coast to west was a highlight

In the evenings, however, while Jenn writes, Jeannette reads. Some books are just for pleasure, others are pre-release reads from publishers which she reviews online. Often

she’ll be reading Jenn’s draft manuscripts and other writing projects.

Jeannette is, as was mentioned earlier, an integral part of the writing process. “I’m Jenn’s wise reader – the one who tells her to cut the crap and poetic prose, ditch the writer’s ego, and just tell a good story. Jenn and I will discuss writing styles and storyline. I’ve also pulled her out of numerous plot holes over five novels. For my contribution, I get a single initial. (Yes, I am The J in Jenn J. McLeod).”

“The business of writing is a team effort and every book is a journey with Jenn. I am a handy editor and brain-stormer, as required, but I leave the creative stuff to her. I’m proud of the way she’s applied herself and how far she’s come from a fifty-year-old who knew very little about writing, about getting published, or about the all-important social media platform an author needs these days. Not every author makes their fortune from writing (which makes me wonder if I might have more retirement funds if I’d been ‘The J’ in J.K. Rowling) but our travels and book tours bring attention to Jenn’s books.”

One element of the new lifestyle that has helped keep Jenn and Jeannette sane has been a number of stints as farm and house sitters. This is an opportunity to park the van and spread out through a house.

“We’ve had sits with a year’s notice and some with a month’s notice,” Jenn says. “We are listed on the Grey Nomads website and with an official online house-sitting website. It is nice to have a bit of room for a change, except when we have to clean the place!” 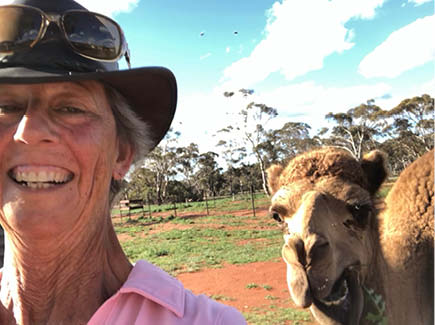 I asked the pair if they can see themselves selling the van and settling down to life in a cottage somewhere one day?

“We talk about this often and come up with a new plan every time. Both of us agree that there’s no going back to maintaining a large property, but we know we won’t be able to live on a small suburban lot after enjoying the wide-open spaces for years. A retirement village – with a pool – might be nice one day.  Or a smaller motorhome (suitable for suburban streets) would provide more housesitting opportunities further afield. There is a lot more of this country to discover before we settle in one place. And we have to find that place first.”

Finally, I asked Jenn and Jeannette what their finest moment on the road has been. “In November 2018 we drove from the east coast to the west, to explore the windblown but wonderful south-west. Not for the first time, mind you. We did ‘the big lap’ 36 years ago in a Ford F100 and a tent, but I must say, this trip was a little more comfortable. A ten-thousand-kilometre round trip is a big one and it took some careful planning, but the rewards were many and the sights incredible. We drove through drought-stricken regions in NSW where decaying carcases dotted the roadside with the same regularity as the centre road markings. Then, within days, we were circumnavigating the Eyre Peninsular, dazzled by green fields, canola crops and cloudless blue skies. The Nullarbor Plain lived up to its name (Null Arbor = no trees), and a dozen southern right wales and their calves waved at us at Head of Bight. Finally, we fell in love with the Caves Road region that takes in Margaret River’s lush hills and dales dotted with black and white dairy cows. So picturesque. Then onto Cape Leeuwin in Augusta (at the western corner of the country) where the two oceans meet and bitter winds almost strip the skin off your face!”

So, if you see a Ford Ranger with a sign on the side that reads; “Jenn J McLeod. Every Book is a Journey,” out on the road somewhere, toot the horn for Jenn and Jeannette, they’re out there living their dream, and spreading the word.