With British pubs being hubs of social gatherings back home, it was inevitable that the hotel trade in colonial Australia would boom and publicans would flourish. Some of the oldest Australian pubs continue to fill glasses with amber fluids today.

A social tipple or three was central to life back home. That means that it wasn’t long before the rum smuggling trade in colonial Australia was bustling. As a result, formalities needed to be put in place to gain crowd control. The earliest Australian hotel licensing records date from 1798, only a decade after the First Fleet’s arrival at Botany Bay.

So as not to fire up a passionate historic publican or two, we kept the criteria for this article simple. Most of all, we wanted to bring you a decent sample of what we know to be a long list of historic Australian pubs that you can still plan to visit and enjoy a drink in today.

What the oldest Australian pubs in the list below share is that they were all originally established as pubs with liquor licenses. Notably, each of these pubs still hold current liquor licenses today. While they may have moved across the road, and been rebuilt since they were originally established, what they have in common is that they started out as a pub, they’re still a pub and they’re all old in terms of Australian colonial history.

A trip to Parramatta without dropping in at the Woolpack for refreshment is out of the question. Courtesy, attention, and good brands are always available at the Woolpack. – The Catholic Press, Thu 29 Feb 1912 | trove.nla.gov.au.

The historic Woolpack Hotel in Parramatta was originally established in 1798 as the Freemasons Arms Inn and gained its current namesake back in 1821. The Woolpack Hotel claims to be one of the first ten hotels in Australia to be granted a liquor licence. While the Woolpack Hotel was rebuilt across the road from the original hotel in the 1890s it holds the longest hotel license in Australia (1796). 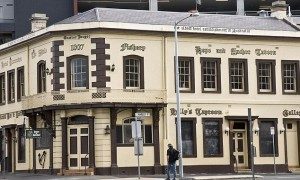 This historic waterfront pub is a Hobart landmark. The tavern makes claim to being the oldest Australian pub, as it has been mostly continuously trading while other candidates for the title had significant breaks in their trading history. It has been known by a few names over the years including the Whale Fishery; the Hope; the Anchor and Hope; and The Alexandra. Naturally its fabulous location and history makes it a sought out tourist destination. The hotel is Heritage Listed by the Tasmanian Government.

TO FIND OUT MORE: Visit the University of Tasmania > Library > Companion to Tasmanian History.

Over 200 years of pulling beers: Horse and Jockey Hotel in Homebush Sydney

Today’s Horse and Jockey Hotel was originally established as The Half Way House Hotel. This is because it was located half way between Sydney and Parramatta.  The hotel has been graced with a number of names before settling into the Horse and Jockey Club Hotel in the 1840s. The building itself has had a chequered history having been demolished and rebuilt a few times. The original hotel, ‘The Half Way House Hotel’ stood 50 metres east of the current hotel.

Visit the Horse and Jockey Hotel website > history; and, 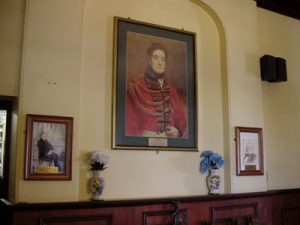 Governor Lachlan Macquarie discovered and settled the Hawkesbury region. Home to the Macquarie Arms Hotel in Windsor the region is one of the oldest colonial settlements in Australia. The beautiful old two storey colonial hotel was built by Richard Fitzgerald under the direction of Governor Macquarie. A portrait of Governor Macquarie graces the Dining Room of the Macquarie Arms Hotel today. According to the pub’s website a past resident, seven year old Mary is said to haunt the hotel. 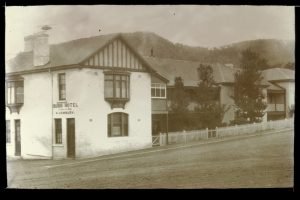 The English pub inspired Bush Inn in New Norfolk Tasmania may indeed have claim to being our nation’s oldest pub. It has been continuously licensed on the same site (since 1825) and in the same building. The Bush Inn has a spectacular history that includes underground tunnels and asylums. It is also  a destination for passionate paranormal chasers!

The Rocks in Sydney boasts more than 100 heritage sites and buildings. The Fortune of War was originally built in 1828 by former stocking thief and convict Samuel Terry. The pub has a long history of being a gathering place after each Anzac Day march.

A brief history of the licensing laws in NSW