In 1868, Patsy Durack and his brother-in-law, John Costello, left their homes in the Goulburn area, and headed up into Western Queensland, looking for their own slice of the vast grasslands that were the talk of every farmer in the south. After weeks of arid landscapes, Patsy noted flocks of birds flying in a particular direction. He guessed, correctly, that they must be heading for water.

Three days later the adventurers found the waterholes of Kyabra Creek, and cattle-raising country equal to any in the world. As Mary Durack later wrote in Kings in Grass Castles, “Here were the pastures of a grazier’s dream—Flinders, Mitchell, button, kangaroo and blue grasses, while gidgee, boree and coolabah trees made scattered shade and lignum sprouted succulent shoots along the courses of winding creeks and gullies.”

The area this article will address forms a rough square from Augathella, west to the South Australian border, south to Cameron’s Corner, then east to Cunnamulla. It takes in much of the famous Channel Country, and offers a gateway to Birdsville, Innamincka and Lake Eyre.

The expression, ‘Out in the Mulga,’ applies perfectly to this oft by-passed slice of the outback. Yet, it has a lot to offer for visitors. As Patsy Durack found, one hundred and fifty years ago, if you want to get away from people, this is the area. Many of the campsites fill with vans from Autumn through to Spring, but it’s not hard to find complete solitude if you want to.

South-western Queensland was once the domain of strong Indigenous nations, including the Margany, Budjari, Kullila, Kunja and Gunggari peoples. Most were displaced or dispersed as white pastoralists moved in, but there are still signs of their presence; in structures such as rock wells. Some proud ancestors still live today on their traditional lands.

The first European explorers in the area included Kennedy and Gregory, but it was adventurous pastoralists, such as Nat Buchanan, that inspired others to head out beyond the settled areas, to stake a claim on vast areas of cattle and sheep country. Thousands of pioneers followed, in wagons, horseback and on foot. They built farms, stores, hotels and towns. Sad but uplifting stories of these adventurous souls would fill a library.

It’s a strange paradox that over the course of European settlement, the population of outback Australia has remained the same or even decreased in some areas. Pastoral industries are now mechanised and need fewer workers. Also, where once a pub and a store were required within a day’s ride of anywhere, the advent of passable roads and motor vehicles means that these services can be more thinly spread.

The famous Durack cattle drive has been mentioned, but the longest sheep drive in history also passed through this area: 11 000 head from Victoria’s Wimmera Region to Avon Downs Station in the NT’s Barkly Tableland. There was also the often-overlooked McDonald brothers, who started out in Goulburn and took their cattle all the way to Fossil Downs in the Kimberley.

The big historic stations in South-western Queensland included Kidman’s Durham Downs, John Costello’s Kyabra, Jerry Durack’s Galway Downs, Patsy Durack’s Thylungra, and Milo Station near Adavale. The latter was one of many vast sheep stations that saw violence and unrest during the shearers’ strikes of the 1890s.

Museums that have carefully preserved this history for the edification and enjoyment of visitors are scattered throughout Southwestern Queensland. These are listed in the town summaries below.

Australian outback lakes vary greatly in extent, depending on recent rainfalls. The lakes in this particular region are a drawcard for bird lovers and photographers. Lake Bindegolly, just west of Cunnamulla is spectacular. You’ll find free camping on the sandy ridges on the southern side; just find a spot you fancy. There are also signposted walking trails.

Lake Yamma Yamma, or Lake McKillop, is located in the far west of the region, close to the South Australian border. This vast waterway is the largest ephemeral lake in Queensland, well known for its waterbirds and natural beauty.

Currawinya National Park, just over the border from the NSW town of Hungerford, boasts two lakes, Lake Wyara and Lake Numalla. Interestingly, despite being in reasonably close proximity, the former is a saline lake, and the latter freshwater.

In the early mornings and evenings, an outback lake tinged purple, with wading birds scattered on a tableau as far as the eye can see, is one of the great Australian vistas. 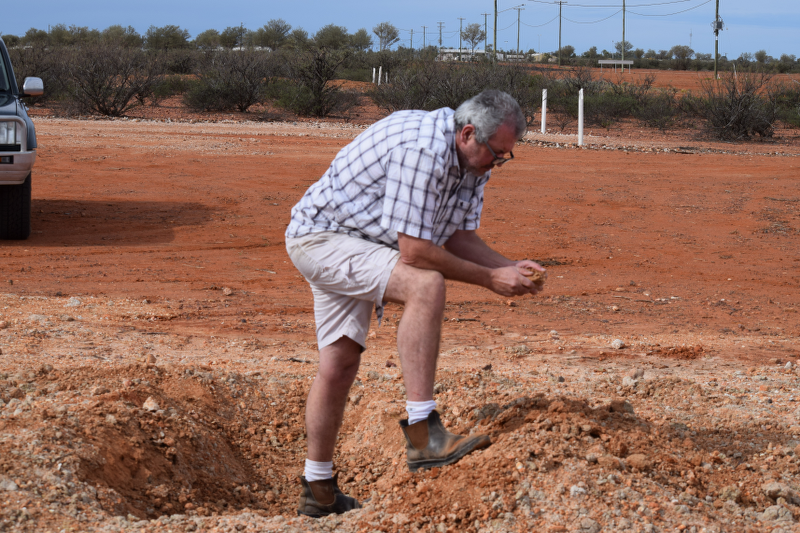 Keep an eye out for these beautiful Australian gems, even well away from the known mining areas, they can crop up over much of this region, most of which is covered by a layer of sedimentary rock called the Winton Formation. The writer’s wife picked up a beautiful stone on the banks of a waterhole.

Boulder opals were first found in this area as early as the 1860s, but the markets did not develop fully until decades later, making their mining economic.

There’s an official opal fossicking area on the road just south of Quilpie, where the sharp-eyed traveller can pick up chips and even gem-quality stones if they’re lucky. There are no gates or fees, just pull up, claim your area, and rake through the piles. Another fossicking area at Yowah, to the south, gives you the opportunity to find a famous “Yowah Nut” opal. Keen fossickers bring picks, shovels and sieves, but most visitors just walk around “specking” for the glint of an opal.

Rivers flowing through the region include the Warrego, Bulloo, Maranoa, Merivale, Balonne, Culgoa and Wilson Rivers, along with the famous Cooper Creek. Expect chains of sluggish waterholes in dry times, and flowing waterways in good seasons. You’ll see all kinds of birds, from corellas roosting in the river redgums, to spoonbills, avocets and cormorants in the water.

You might not expect to find great fishing in such a dry area, but the rivers of South-western Queensland produce good catches of that iconic Australian fish, the yellowbelly or golden perch. There’s also a species or two of grunter, and murray cod in some areas.

Catching legal sized yellowbelly is not always easy. Best baits are worms, bardi grubs, yabbies or live bait, but lures account for good numbers of these fish. Bibless minnows are popular, as are soft plastics and vibes of various types.

Hell Hole Gorge National Park is located at the northern edge of this area, north-west of Adavale. This spectacular gorge is a well-kept secret, as picturesque as many better-known gorges, but make sure you research the road conditions before heading in.

Also near Adavale, Mariala National Park has extensive stands of soft and hard mulga trees, beautiful red soils and an unspoiled arid landscape. There are three camping areas within the park.

Lake Bindegolly National Park lies between Eulo and Thargomindah, and was formed to protect a rare acacia plant. The lake (already mentioned) is the main attraction.

Currawinya National Park is located in the southern part of the region, near the NSW border. It includes sandy plains, mulga forest, picturesque ranges and (the aforementioned) Lake Wyara and Lake Numalla. There are also some important wetlands.

Please note that permits are required for some of the campgrounds within these parks, and must be applied for prior to your visit.

The list of bird species is far too long for this article, but some of the more impressive species include wedge-tailed eagles, kites, brolgas and of course emus. All are in good numbers, along with lorikeets, parrots, cockatoos, and wading birds of various species.

You should spot plenty of grey and red kangaroos, euros, the occasional dingo, and feral goats and pigs. Echidnas are well adapted to the arid landscape, and you might well spot one crossing a road.  If you’re incredibly lucky, you just might see a bilby. 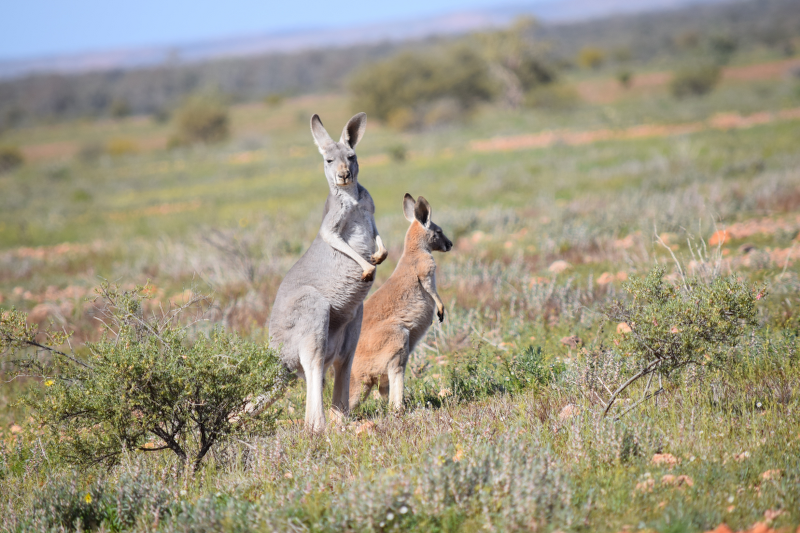 Adavale is well off the main tourist trail these days, but was once a regional hub. Like all the towns in South-western Queensland, Adavale knows how to make visitors feel welcome.

Augathella revels in being the home of a notorious insect, the so-called “meat-ant.” Even the town’s Rugby League team is named after them. These insects are rarely a bother, however, and the town, being on one of the main routes through Queensland to the Northern Territory, sees large numbers of visitors every year.

Charleville is an iconic outback town, the largest in the area, and the administrative centre of Murweh Shire.

Cunnamulla is an iconic outback town, made famous in the Slim Dusty song, “The Cunnamulla Fella.”

Eromanga is a small town, but with an ancient history. Some of Australia’s best dinosaur finds have been made in this area.

Eulo is famous for the colourful “Eulo Queen” who once ran a hotel in the town.

Morven is named after a mountain and town of the same name in Scotland.

Camping options: The showgrounds, just off the main street, offer free camping, with a small fee for powered sites.

Quilpie is a great little town with a big heart. It has free showers for travellers at a park on the way into town, with boiling-hot bore water at high pressure.

Thargomindah was the first town to be gazetted in the Bulloo Shire, and was once the site of horse races patronised by the Duracks.

Now all you have to do is get out there, and enjoy one of Australia’s best outback experiences.