It’s probably the most famous coconut shell in the world.

During his occupancy of the White House, US President John F. Kennedy used it as a paperweight on his desk in the Oval Office.

After the tragic events of his assassination in 1963, the coconut became a treasured item in the Kennedy Museum in Boston and is there to this day.

Inscribed in the shell are the words:

The message was carried to the US Pacific Navy Squadron Commander by two Solomon Islanders, Eroni Kumana and Biuku Gasa, who discovered the then Lieutenant Kennedy and his remaining crew on a small uninhabited island. They had survived after Kennedy’s PT-109 patrol torpedo boat was rammed by the Japanese destroyer Amagiri in the early hours of the morning in August 1, 1943 during the battle of Guadalcanal, one of the Second World War’s bitterest campaigns.

Two of his crew had died in the attack but Kennedy miraculously managed to get his remaining men (including one seriously injured whom he “towed” on his back using a gun-strap between his teeth) to swim across dangerous waters to another nearby island.

Meanwhile, carrying the inscribed coconut shell in their dugout canoe, Kumana and Gasa had paddled more than 50km through Japanese-occupied islands to deliver the message. A week later PT 157 commanded by William F. Liebenow, came to the rescue.

It seemed strange standing there on what was once called Plum Pudding Island but is now known as Kennedy Island and looking out over the stretches of turquoise coloured waters of this Western Province area of the Solomon Islands where Kennedy and his crew made their heroic swim.

We were having a traditional Coral Triangle picnic among the swaying palms and screeching parrots on this isolated atoll which became part of history and on which there is a moving memorial to those events.

Ever mindful of our surroundings, we enjoyed a sumptuous lunch which included superb barbecued lobster and fried fruit and vegetables including local pumpkin, bananas and eggplant. The still-uninhabited but now locally-owned island is just a short boat trip across the water from the well-known Fatboys resort where we were staying. 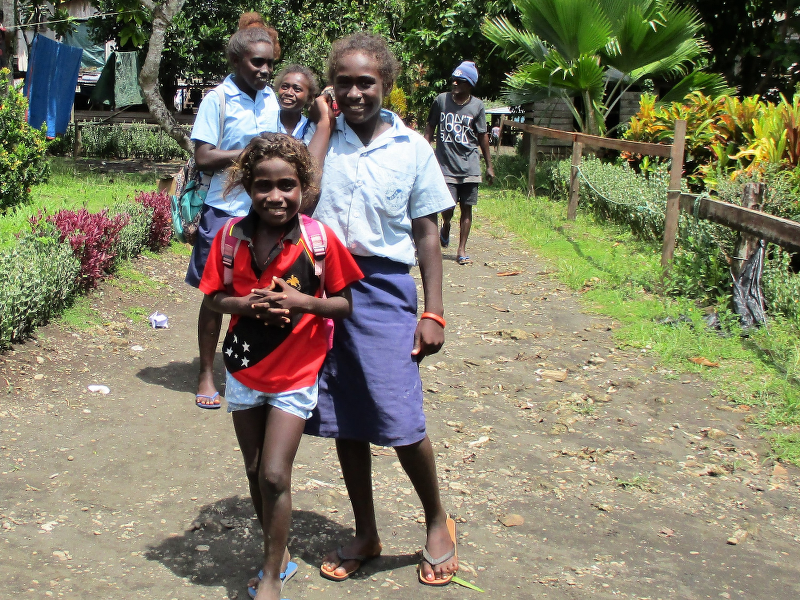 The resort is situated near Gizo, one of the main towns of the Western Province, and run by an Australian entrepreneur Dan Kennedy.

The wonderfully comfortable thatched bungalows have huge double beds covered by sweeping mosquito nets wafting in the tropical breezes. They line the coral fringed beaches around the small villages of Mbabanga Island and provide a unique accommodation for our stay.

The cosy bar and restaurant sit picturesquely at the end of a long pier above the tropical aquamarine waters and each afternoon you can lean over the balcony and watch the slender grey reef sharks threshing around and fighting for the titbits thrown to them by the restaurant staff.

If you’re still in the mood after that, you can go snorkelling, kayaking, fishing or stand-up paddling and discover the eerie coral formations which lie just below the surface and later cool off again with a local Solbrew lager or glass of Aussie wine. For the more adventurous, there’s even expeditions for birdwatchers to a nearby volcanic crater, home to hundreds of nesting Pacific birds.

After a strenuous day, there’s nothing like returning to the Fatboys evening dinner menu which features delicious fresh fish and chicken dishes. The breakfast choice of flapjacks, scrambled eggs or omelettes is mouth-watering … and they’ve even got jars of Vegemite for your toast!

One of these is Oravae, run by another adventurous Australian, Naomi Baca and her locally-born husband Patson) which offer “getaway holidays with a difference.” (If you’re lucky, you can spot a dugong lazily swimming between the coral outcrops just a few metres from Naomi’s “jungle” cottages.

Oravae is situated on the island of Sepohite, and Naomi and her husband have had to rebuild some of the structures following the deadly tsunami which ravaged some parts of the South Pacific region in 2007 but now the bungalows and facilities are restored and offer a secluded holiday destination.

After previously leaving our first stop-off place at Munda on the Roviana lagoon, we spent a lazy morning on the banana boat, piloted by local Tourism Solomons guides Billy and Brenden, and were taken to the Titiru Eco Lodge run by local chief Kilo and his family, where we received a colourful, warm island welcome. 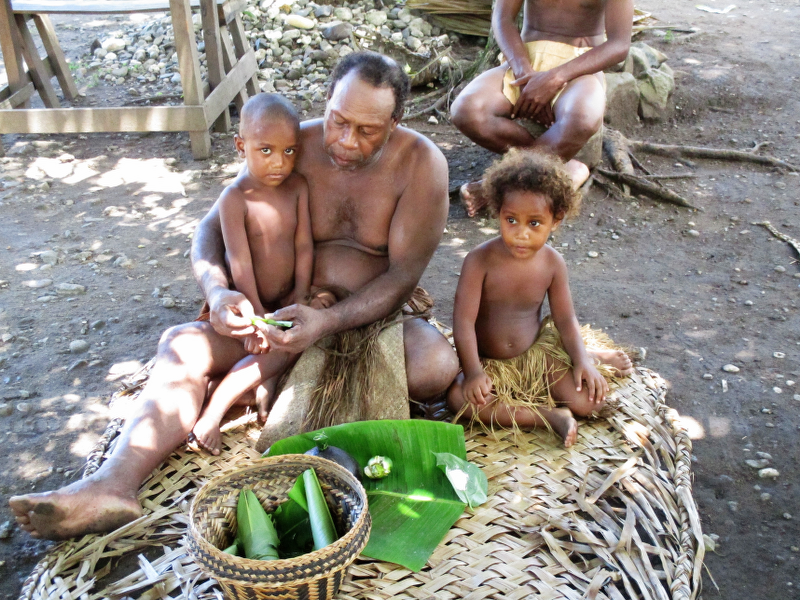 Native chief Primo and his grandchildren welcome visitors to their traditional village.

We were regaled with a traditional island lunch and escorted around the resort’s beautifully equipped bungalows and amenity blocks literally hidden among the thick jungle growth and winding coral edged paths.

If you want to really “get away from it all” an eco-resort such as Titiru offers isolated bungalows built right on the deeply blue lagoons each with a private wharf and canoes and well away from any prying eyes.

(But don’t expect the sophistication and ultra-modern conveniences of resorts and hotels in other more popular tourist destinations such as Bali, Fiji, Vanuatu or Vietnam. Thanks to cash injections from both the Australian and New Zealand governments, most island resorts do have generators and solar powered water heating so you don’t have to rough it too much!)

Titiru was the perfect stop-off place before we set off across the wide stretch of ocean between the islands towards Fatboys (about an hour and a half in the open boat, although our boatman Billy, who reckons he knows every single one of the Solomons’ 900 islands, said it was only a 45-minute trip. But that’s “island time” of course!!)

After our all-too short stay on the idyllic secluded resort of Fatboys we flew back to the capital Honiara on a Dash 8 aircraft from Nusa Tupe airstrip and took up residence once again in the top-class Heritage Park Hotel.

It was on our last day that we were privileged to witness perhaps the most memorable of all the local customs during our visit to the intriguing Solomon Islands, known affectionately as the Hapi Isles. 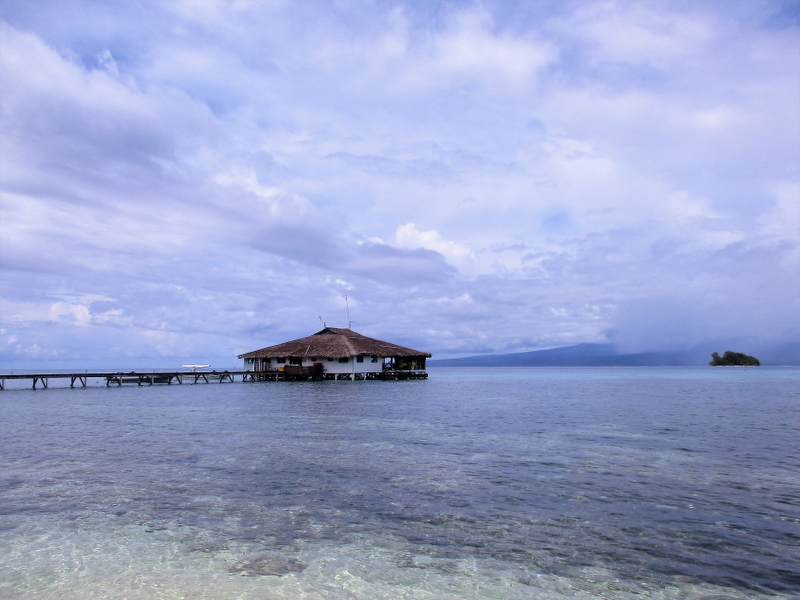 Fatboys bar and restaurant on the end of a picturesque pier..the resort’s bungalows line the coral edged shores of the lagoon.

Our guides took us to a “cultural community traditional movement” village called Moro, a bumpy pot-holed ride about an hour along isolated tracks outside Honiara.

But it was all worth it. There we met a remarkable local chief called Primo, who has re-created a traditional village dating back hundreds of years when head-hunters and missionaries inhabited the islands.

Primo explained that the purpose of the village was to teach younger generations the historic culture, crafts and languages of their revered forebears.

As we watched in awe, Primo, with his two grandchildren on his lap, laid out the village welcome mat and prepared the traditional food and drink in a ceremony called “tatalonga.”

Luckily we didn’t have to sample the nasty looking “kava” type drink that a laughing Primo concocted but we were to get a taste experience of a lifetime when Primo’s wife Pauline and daughter Sharon, clothed in their traditional grass skirts, lit the stone and banana leaf fire pit in a native thatched hut and cooked us a meal of roasted pork in bamboo sticks.

Phew!! It was hot stuff…but it’s a feast you won’t find in any takeaway food outlets in our neck of the woods!

*Go55s was part of a media contingent invited to the area by the Solomon Islands Visitors office, Tourism Solomon, and Solomon Airlines in a bid to help boost tourism to the developing nation. We were guests of the Heritage Park Hotel, Honiara, Agnes Gateway Hotel, Munda and Fatboys Resort.