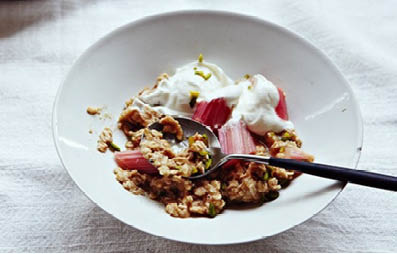 At first glance rhubarb’s appeal can seem a little mystifying. Its stalks are fleshy and tart-tasting, while its leaves contain oxalic acid, which can be toxic.

But rhubarb fans will tell you there’s nothing like the tangy taste and radiant rose-red colour it adds to cooking, especially when baked in pies and crumbles or stewed and spooned over chilled desserts.

Rhubarb was first cultivated in China in 2700 BC, where it was prized for its medicinal properties. Rhubarb’s therapeutic fame spread to the West and it became a valuable unit of trade for China, along with tea. It was first used as a cooking ingredient by the English in the 18th century.

Rhubarb is related to sorrel, buckwheat and various inedible weeds, and was classified as a vegetable. However, it officially graduated to fruit status in 1947 after the US Customs Court in Buffalo, New York decreed rhubarb be categorised a ‘fruit’, since it was most commonly prepared and served as one.

Rhubarb has a great colour and tartness that makes it an ideal accompaniment to sweet and savoury dishes. This is a Greek-inspired muesli with added rhubarb for that delicious colour. You will need to soak the oats overnight.

1 Put the rhubarb in a large saucepan with the honey and orange juice and poach gently over a low heat for about 10 minutes, until the rhubarb has just softened. Cool and drain the cooking liquor into a jug, then add the rose water or extract.

2 Mix the cooking liquor with the oats, cinnamon, yoghurt, half the almonds or pistachios and half the rhubarb. Stir to combine and refrigerate overnight, allowing the oats to soak.

3 Serve the muesli topped with the remaining poached rhubarb, almonds or pistachios, more Greek yoghurt and a drizzle of honey.

6 Local Produce Markets Worth Travelling For