Fans and admirers of Elvis Presley will be pleased to learn of the new cruise tour which traces his path to stardom that departs Australia in May next year.

2017 marks the 40th anniversary of the death of the king of rock’n’roll, Elvis Presley, history’s greatest solo singer who sold more than 600 million records. To mark the occasion, Cruise Express is offering Australians the opportunity to experience a cruise tour which will take music lovers to the legend’s birthplace, recording studios and home at Graceland where he is buried.

This new 17 night “Mississippi, Elvis and the Southern Sounds” cruise tour will visit iconic music centres in southern USA, including places pivotal to Elvis’ rise to stardom as well as Nashville, Tennessee, the home of country music and New Orleans, Louisiana, the birthplace of jazz. 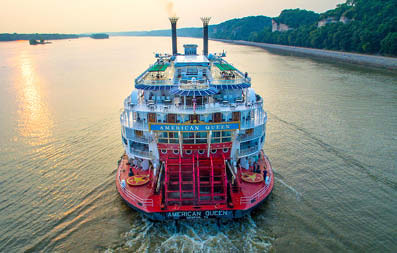 The tour includes a six night cruise on the Mississippi aboard the elegant “American Queen” river ship via historic towns, river ports and plantations, evoking memories of Gone with the Wind and Huckleberry Finn.

This music themed journey departs Australia on 28 May, 2017 and begins in New Orleans, a vibrant city famous for its live jazz scene, where passengers will embark on the luxurious “American Queen” and journey up the mighty Mississippi, visiting river towns like Natchez, which was first inhabited by native Indians and French explorers, as well as sprawling plantations with some of the world’s stateliest mansions.

Passengers will disembark at Memphis, Tennessee, where they will take part in a guided city sightseeing tour, visiting various Elvis sites, including the theatre where he gave his first paid concert, the Rock’n’Soul Museum and Sun Studio where the first ever rock’n’roll single was recorded and where legends like Jonny Cash, Carl Perkins and Elvis recorded hit records throughout the 1950s.

Visits will be made to Elvis’ birthplace, a small, two room house built by the singer’s father, Vernon and the Elvis Presley Museum. A whole day will be spent at Graceland, Elvis’ mansion, with its decadent and quirky rooms and Meditation Garden, where the King is buried.

The journey will conclude at Nashville, Tennessee, the home of country music, with a visit to the Johnny Cash Museum and time to experience a private performance from Cash’s son and experience the Nashville Country Music Festival.