Gardening on public land dates back to the early 19th century when the British Government allocated plots of land to the poor to grow vegetables and flowers. They have flourished in some form or another ever since. From the victory gardens during WW1 and WW2 to large greening projects, to small curbside gardens, community gardening has taken many forms.

In the UK and Europe allotment gardens have been an important source of food for many families, some passing on allotments for several generations. In Cuba organically farmed community gardens fed millions of people after the collapse of the Soviet Union and its economic support in 1989. In Asia, community gardening remains a typical way of life in many villages.

Community gardens are being recognised as an innovative way to grow food and improve health. They bring together people from all walks of life, backgrounds and ages to foster a lively and connected community. Whilst gardening is the focus, community gardens are generally community hubs for a range of activities – learning and education, playgroups, arts and creative activities, preparing and sharing food, community events, celebrations and social enterprise. 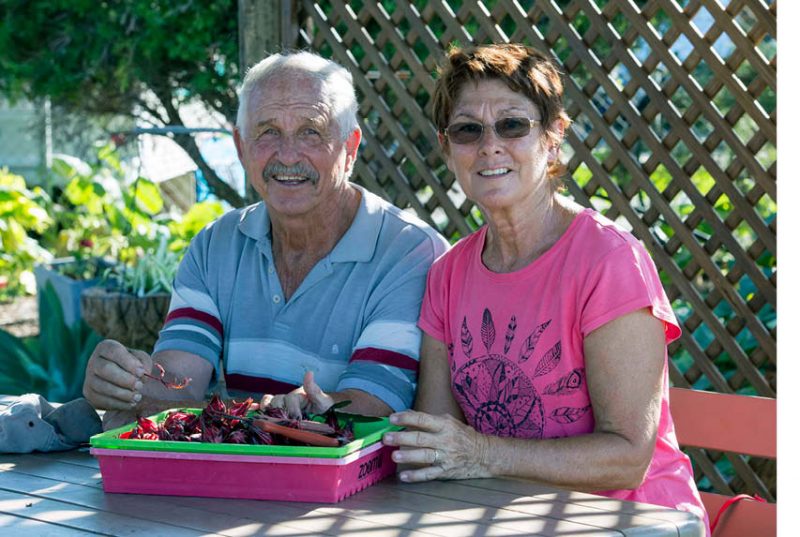 Residents of Carlyle Gardens are proving that running a successful community garden needn’t be all about soil and toil. The flourishing garden at the Bargara village was established in March last year and has been a source of much pleasure for residents since.

Margaret Halliday helped established the garden along with her partner Robert, fellow resident Les Mills and others.

“We have pumpkins, tomatoes, shallots, rosella, plus we have rose gardens and succulents in a dry area,” Margaret said.

“People love the jams, relishes and chutneys that are made from the produce.

“We also put produce up in the community centre for people to enjoy for a small donation.”

As well as tasty fruit and vegetables, the garden brings other benefits, Margaret explained.

“It’s a social thing – anyone is invited to take part,” Margaret said.

“On Sunday mornings we water the produce, then have a cup of coffee and a snack or something and generally discuss what’s going on with the garden.”
Keen travellers Margaret and Robert have lived at Carlyle Gardens for five years, and are enjoying life at the beachside community as much as ever.

“We love the peace and quiet, the security and the fact we can regularly meet up with friends,” Margaret said. “It’s a very social sort of place. “When we’ve been away, it’s always a great place to come back to.”

If you would like to get a community garden started in your area visit Australian City Farms & Community Gardens Network (ACFCGN) for more information or you could also contact your council directly or if you are in a retirement village take a leaf out of Margaret Halliday’s book!

City Of Sydney Tips on Starting a Community Garden