HAUNTING IMAGES OF THE WAR THAT TORE APART A NATION

The three men of the 8th Light Horse are huddled together in a shallow trench.

They are shrouded in mud and grime and almost look like mummified figures.

Their faces still show the fear and anguish as they tried to escape from the demonic shrieking of the bursting artillery shells overhead.

But the photograph, taken in the height of the action, is also a deeply evocative and moving tribute to the camaraderie of the Diggers on the blood-drenched battlefields. 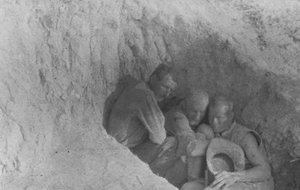 It is June 1915 on Walker’s Ridge, Gallipoli and the three sheltering Diggers had been pinned down by the ceaseless bombardment from the Turkish big guns.

It has been described as one of the most powerful Australian war photographs of all time and is one of the relatively few images taken under fire in Gallipoli.

According to senior historian, Peter Stanley, official photographers rarely took or were allowed to print photographs of corpses.

The man who took the photograph, Edward Campbell, was under no such censorship when he photographed rotting Turkish bodies outside the trenches of the 8th Light Horse.

As Professor Stanley says in his latest book: “Thanks to the daring of men like Campbell we have a much clearer idea of the reality of Gallipoli than of any previous (and many subsequent) episodes in Australian military history.

“When I saw that photograph of the Light Horsemen sheltering under the bombardment on Gallipoli, it impelled me to create a book that made this image better known – I think it’s one of the most powerful Australian war photos of all time,” he told Go55s.

Professor  Stanley of UNSW Canberra has used documents, photographs, artefacts and images from the collections of the National Library of Australia “to evoke the drama and tragedy, suffering and sacrifice, pain and pity of Australia’s Great War.”

The book, The Crying Years, has just been released and is a worthy tribute to the research and dedication of the prize-winning historian who has already had another 30 books published.

“My immediate inspiration for this particular work was becoming aware of the richness of the National Library’s collections on the Great War while I was writing the ‘Society’ chapters of The War At Home (a volume of the Oxford Centenary History of Australia and the Great War) and more immediately by hearing a talk on the library’s photo collection by NLA curator Nicky McKay-Sim,” Prof Stanley said.

“I thought of this book in about 2012 but I didn’t start serious work on it until late 2014 and I delivered it early in 2016, so it took me much of 2015, spending a lot of time in the library’s Special Collections Reading Room,” he said.

Just as in the dramatic photograph of the huddling Light Horsemen, Prof Stanley was also deeply moved by many of the personal stories of people affected by the war and its horrific death toll.

“During my research I came across the sad story of artist Ruby Lind, wife of war artist Will Dyson. She died in the great influenza pandemic early in 1919 in London.

“Will published a book of her drawings as a tribute to her and its most poignant feature is that on one of her drawings her small daughter Elizabeth (Betty) added a drawing of her own.

“Will Dyson’s art powerfully exemplifies the trench experience for Australia but Ruby Lind’s work captures the tragedy of the war and all it brought,” Prof Stanley said.

Ruby Lind was actually one of the multi-talented Lindsay family but shortened her name and later married Dyson who was Australia’s first official war artist.

Another of the personal stories which affected Prof Stanley was that of poet Zora Cross (1890-1964).

“I became aware of her poetry while writing my 2011 book Digger Smith and Australia’s Great War. 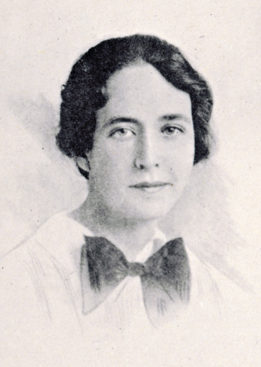 “She was a remarkable woman – a free-thinking Bohemian at a time when living as an independent woman was very hard in a less liberal Australia.

“Her verse expresses so much about the experience of the Great War and her Elegy on the Death of an Australian Schoolboy – inspired by her brother’s death – gave me the title of the book,” he said.

Throughout the book, The Crying Years, Prof Stanley acknowledges the contribution of war correspondent and historian Charles Bean.

“Bean’s history is a valuable foundation but it doesn’t deal with a great range of aspects of the Great War, because he wrote from his own perspective as a participant.

“He didn’t have the resources we have now (including the National Library’s) because he asked different questions to us.

“Bean for example focused on the experience of Australian soldiers, whereas I focused mainly on civilians,” he said.

He goes on to explain that between war propaganda, the influence of Bean’s official histories and John Monash’s The Australian Victories in France (1920), the war has come to mean the experience of men in khaki on Gallipoli and in the trenches.

“But of course there was a great deal more than that…statistically the experience of the 300,000-odd men of the AIF was a tiny proportion of the war’s impact on five million Australians.

“The Crying Years tries to redress the imbalance,” he said. 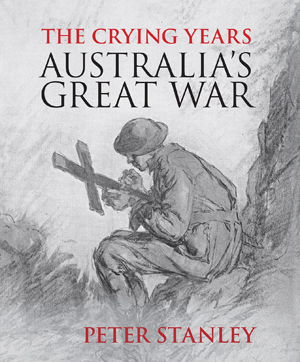 “The war at home was dramatic and traumatic for many people, certainly in the effects of casualties, but also in the unsettling effects of war in prices, in provoking political and industrial conflict.

“I think the war tore the guts out of the progressive, optimistic, promising Australia created by Federation.

“The Great War was an unmitigated disaster .. it brought nothing but tragedy to Australia and the world.

“Perhaps I’m too close to military history but I’m also wary of stories of humanity in war, and especially in a war of the industrial savagery of the Great War.

“When I think of the stories the book tells, I’m more inclined to think of someone like Hugo Throssell, who was awarded a VC for his heroism but who killed himself after the war because he felt he’d failed to live up to the crushing expectations placed on him,” he said.

Photo 1 – A proud old Digger parading through the streets of Melbourne on Anzac Day, 1962.

Photo 2 – The haunting battlefield photograph, taken by Edward Campbell, of three Light Horseman sheltering from bombardment on Gallipoli in June 1915…it’s described as one of the most powerful Australian war photographs of all time.

Photo 3 – Burial service for 24 men of the 20th Battalion who were killed in action on August 31 1918 in France..the dead included a pair of twins from Mudgeeraba, Qld and a 17-year-old who lied about his age.

Photo 4 – Zora Cross whose poem about her dead brother inspired the book title, The Crying Years.

THE NIGHT OF THE BIG KANGAROO KILL

MAKING A MEAL OUT OF A RESTAURANT EATING EXPERIENCE