Why do we say that someone who is fired gets the sack?

The ancient Romans didn’t believe in mollycoddling convicted felons. Rehabilitation wasn’t their style. Those convicted of parricide or other heinous murders were tied in a sack and dumped into the Tiber River, instantly solving any potential recidivism problem. The practice spread throughout many other European countries, and, as late as the nineteenth century, murderers in Turkey were tossed into the Bosporus in a sack. To get the sack, then, probably was used figuratively as a threat of any sort of punishment, such as losing one’s job.

Another theory to explain how get the sack was recorded — as early as 1611 in France — is that it referred to craftsmen of the Middle Ages. Artisans carried their tools in sacks; while they worked, they handed the sacks to their employers. When a craftsman got the sack, it meant that his services no longer were required. He was left, literally, holding the bag. 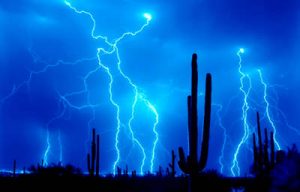 2. Why do we say that someone who has appropriated someone else’s ideas or future remarks has stolen thunder from the victim?

I had always assumed that this expression must have Greek mythological roots and perhaps was a reference to Zeus. The true story is much more prosaic.

John Dennis, an English poet and playwright, wrote a tragedy called Appius and Virginia, which was produced in 1709 to less than rousing commercial success. Only one element of the production stirred the audience: thunder sound effects more realistic than any heard before on the stage, effects that Dennis himself created.

The play failed, but the theater’s next production didn’t. Dennis went to check out a successful production of Macbeth and was more than a little upset to discover that his sound effects were used in the storm scenes of Shakespeare’s tragedy.

Different sources vary slightly in describing what Dennis exclaimed upon hearing ‘his’ thunder help promote the new production, but they are all variations of Stuart Berg Flexner’s quote: ‘See how the rascals use me! They will not let my play run, and yet they steal my thunder!’ I’m sure that Dennis would be even more embittered to learn that the only phrase of his that has gained immortality is his expression of sour grapes.

3. What is the difference between a ‘kit’ and a ‘caboodle’?

Anyone who thinks that changes in the English language are orderly and logical should take a look at the expression ‘kit and caboodle.’ Both words, separately, have distinct meanings, but the two have been lumped together for so long that each has taken on much of the other’s meaning.

Both words have Dutch origins: ‘Kit’ originally meant tankard, or drinking cup, while ‘Boedel’ meant property or household stuff. By the eighteenth century, ‘kit’ had become a synonym for tool kit. For example, the knapsacks carried by soldiers that held their eating utensils and nonmilitary necessities were often called ‘kits.’ ‘Boodle’ became slang for money, especially tainted money. By the nineteenth century, ‘caboodle’ had taken on connotations of crowds, or large numbers.

Yet the slurring of meanings occurred even before the two terms became inseparable. The Oxford English Dictionary quotes from Shelley’s 1785 Oedipus Tyrannus, ‘I’ll sell you in a lump the whole kit of them.’ In this context, ‘caboodle’ would seem more appropriate than ‘kit.’

By the mid-nineteenth century, ‘kit’ had found many companion words in expressions that meant essentially the same thing: ‘kit and biling’; ‘whole kit and tuck’; ‘whole kit and boodle’ and ‘whole kit and caboodle’ were all used to mean ‘a whole lot’ or ‘everything and everyone.’ The Dictionary of Americanisms cites a 1948 Ohio State Journal that stated: ‘The whole caboodle will act upon the recommendation of the Ohio Sun.’

The expression ‘kit and caboodle’ was popularized in the United States during the Civil War. The slang term was equally popular among the Blue and the Gray. Although the expression isn’t as popular as it used to be, it’s comforting to know that old-fashioned slang made no more sense than the modern variety. 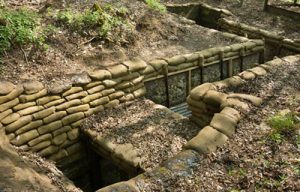 4. Why is a final effort called last ditch?

Anyone who fought in a war has probably hoped that the trench he was in was the ‘last ditch’ he would ever see. Most of us would guess that the ditch referred to in last ditch is a military trench rather than a farmer’s irrigation ditch, but few realize that this expression predates the two world wars.

The first recorded use of last ditch was in Bishop Gilbert Burnet’s memoirs, History of My Own Time, published in the early eighteenth century: ‘There was a sure way never to see it [Holland] lost, and that was to die in the last ditch.’ The earliest use of last ditch was a literal one, signifying a last stand, a last defense against an aggressive enemy. The first American citation was in a proclamation issued by the citizens of Westmoreland, Virginia, in 1798: ‘ … but one additional Obligation, To Die in the Last Ditch or uphold our nation.’

Thomas Jefferson was perhaps the first to use the phrase figuratively (1821): ‘A government … driven to the last ditch by the universal call for liberty.’

5. Why is mincing around a subject called beating around the bush?

Medieval men may not have had the thrill of flinging Frisbees, but they had a worthy counterpart, the challenging sport of batfowling. A rare nocturnal sport, batfowling consisted of going into a forest or shrub-laden area and beating birds senseless with a bat. Batfowlers sought sleeping birds for their prey, but being true sportsmen, they didn’t want to kill a defenseless bird. So before whacking it with the bat, they were kind enough to wake the bird up first, by stunning it with a harsh light, rendering the bird blind and temporarily helpless. ‘Sensitive’ batfowlers caught the birds in nets rather than using the Darryl Strawberry approach.

Sometimes, though, the birds proved to be uncooperative, selfishly sleeping in bushes where they were invisible, instead of marching forward and offering themselves as ritual sacrifices. So batfowlers engaged servants or boys, known as beaters, to literally beat adjacent bushes to rouse flocks of sleeping birds. As the stunned birds awakened and fled in panic, they would be attracted to the torch or lantern and be socked into unconsciousness by the batfowler.

Although the person today who beats around the bush might not have violence on his mind, he similarly conceals or avoids the real thing that concerns him. While he might pretend to be interested in the bush, he might be more interested in the bird, or worm, lurking inside.

6. What is the difference between ‘flotsam’ and ‘jetsam’?

Although they sound suspiciously like two of Santa’s missing reindeer, flotsam and jetsam are actually two different types of debris associated with ships. We rarely hear either term mentioned without the other close behind (and saying ‘jetsam’ before ‘flotsam’ is like saying ‘Cher’ before ‘Sonny’). When we talk about ‘flotsam and jetsam’ today, we are usually referring metaphorically to the unfortunate (for example, ‘While visiting the homeless shelter, the governor glimpsed what it is like to be the flotsam and jetsam of our society’).

At one time, however, ‘flotsam’ and ‘jetsam’ not only had different meanings, but carried important legal distinctions. In English common law, ‘flotsam’ (derived from the Latin flottare, ‘to float’) referred specifically to the cargo or parts of a wrecked ship that float on the sea.

‘Jetsam’ (also derived from Latin — jactare, ‘to throw’) referred to goods purposely thrown overboard in order either to lighten the ship or to keep the goods from perishing if the ship did go under.

Although the main distinction between the two terms was the way the goods got into the water, technically, to become jetsam, the cargo had to be dragged ashore and above the high-water line. If not, the material was considered flotsam, which included all cargo found on the shore between the high- and low-water lines.

Actually, two more terms, ‘lagan’ and ‘derelict,’ were also used to differentiate cargo. ‘Lagan’ referred to any abandoned wreckage lying at the bottom of the sea; ‘derelict’ was the abandoned ship itself.

While insurance companies today have to pay out for flotsam, jetsam, lagan, and derelict, the old distinctions once dictated who got the remains. Jetsam went to the owner of the boat, but flotsam went to the Crown. The personal effects of nonsurviving crewmen could become flotsam or jetsam — depending on how far the debris traveled and whether it floated. 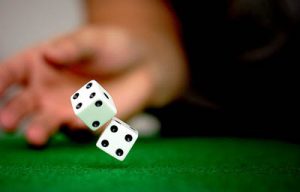 7. Does anyone ever engage in low jinks? And what’s a jink?

Originally a Scottish word, the primary meaning of jink has, for the past two hundred years, been ‘to move swiftly, especially with sudden turns.’ High jinks has existed just as long. Although we now use high jinks to refer to any prank or frolic, during the late seventeenth century and the eighteenth century, high jinks was a popular parlor game. A throw of dice would determine one ‘victim.’ He would have to embarrass himself by performing some prank for the amusement of the other revelers; if the victim refused or couldn’t satisfactorily perform the task, he had to pay a forfeit, usually downing a hefty container of liquor.

If this is the origin of HIGH jinks, it is probably just as well that there is no LOW jinks in our lexicon.

The over-55s love tablets so why don’t manufacturers love them?