Are the baby boomers having a second sexual revolution?

In a pioneering study, research from the Swinburne University of Technology is investigating the sexuality of heterosexuals aged 45 and above to better understand how this age group perceives their own sexuality.

PhD candidate Ashley Macleod says that so far the Over 45’s Adult Sexuality and Intimacy Study (OASIS) has revealed that mid and later-life Australian heterosexual adults are more interested in quality connections and intimacy with their partners, rather than more frequent sexual experiences. This research is challenging many traditional perceptions of older adult’s sexuality – demonstrating the importance of intimacy in this age group.

“The research shows that older Australians have an increasing desire for affectionate and intimate sexual behaviours, such as hugging, kissing and touching, with a trusted partner who respects them. It also shows that and not having a good relationship with a partner is much more likely to interfere with someone’s sexuality and sexual expression than other barriers, such as sexual dysfunction,” said Ms Macleod.

“This means that traditional remedies for sexual dysfunction – such as Viagra – may not be appropriate for all older people, some of whom may be better off being referred to a relationship counsellor for support.”

Ms Macleod says that thanks to the baby boomer generation, the idea of the “asexual older person” is disappearing, but the way sexuality is currently understood doesn’t align with what this group says is important to them.

“To understand how sexuality fits in to the ageing lifestyle, it’s important to be able to accurately define what sexuality means to people in and after mid-life in the real world. Considering the world’s ageing population – and the significant contribution sexuality has towards a person’s mental and physical health, interpersonal relationships, and identity – it is more important than ever that society understands how sexuality manifests throughout the entire lifespan, and has mechanisms in place that appropriately respond to this need.”

At present, very little is known about healthy sexuality in the latter half of life because x most sexuality research looks almost exclusively at the sexuality of adults during their reproductive years, or at sexual dysfunction in later life.

“Being ‘sexually active’ is so commonly associated with intercourse frequency, and sexual prowess, however our research shows that it’s much more. The fact of the matter is that, contrary to stereotype, people in mid and later life aren’t asexual beings. In fact, they’re participating in sexual activity regularly – just in broader and more emotionally-stimulating ways,” said Ms Macleod.

The research also found that as men and women age, their views on sexuality become more closely aligned, as did the views of those in mid and later-life age groups.

The final phase of the study will look to validate the findings so far by looking at a larger sample group.

The OASIS is currently recruiting eligible participants. To participate, go to: swi.nu/oasis

The study is completely anonymous and does not ask you to divulge any personal information about your own sexual experiences, but does ask you to respond based on your personal thoughts and attitudes.

Photo by Hermes Rivera on Unsplash

Don’t be lacksadaisical when it comes to health screening 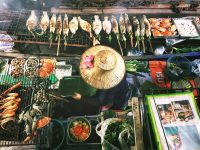 What food experiences are worth touring the globe for?