As reported by John McNamee in the winter 14 issue Bondi man Cyril Baldock has set the record for the oldest person to swim the English Channel.

IT’S not most people’s idea of a great day out but for Bondi lifesaver Cyril Baldock becoming the oldest person to conquer the English Channel was “the most fun I’ve had in my life’’.

The exhausted but delighted swimmer said he was elated to have finished the swim between England and France he first did back in 1985 and which he finished today at age 70 for a new world record.

Baldock, a long-time member of the Bondi surf lifesaving club, crossed the Channel in 12 hours and 43 minutes. The total distance he swam is still to be calculated but it was well in excess of 34km.

After a warm shower, Baldock was this morning celebrating his success with his feet up and a few beers with his support team and family members.

“The beers are just for medicinal purposes of course,’’ he laughed.

“I feel good. A little tired of course.

“I have a few scrapes because I got washed over the rocks in France but otherwise I’m OK. I got a bit sick on the way back in the boat, a combination of sea sickness and all the water I swallowed.

The swim was to raise money for the Melanoma Institute of Australia charity but also to honour the memory of his good mate, the late Des “King of the Channel” Renford who had wanted the record of being the oldest to achieve the feat before his death.

Baldock had promised he would achieve the feat for Renford and this morning honoured his word. 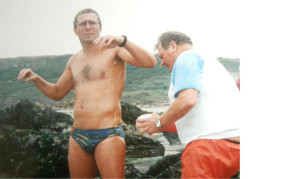 Channel”King” Des Renford applies the famous grease to Cyril Baldock before his first successful crossing in 1985.

Murph Renford, Des Renford’s son, was at the dock to greet Baldock at the end of his swim.

“He (Des Renford) was there the whole time with me,’’ Baldock said this morning.

“I visited his grave before I came over and put some flowers on it. 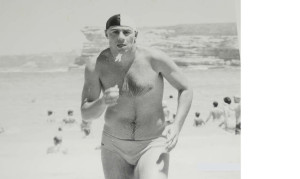 To read more head to the winter 14 issue of Go55s.

Why we should eat 5 cups of vegetable daily