Why Fab’s Got A Ton of Golden Memories!

JOHN McNAMEE talks to the ‘Poet Laureate’ of Aussie sport

It was a hot November day in 1947 and there was a huge buzz of excitement around the hallowed stands of the Sydney Cricket Ground.

Australia was playing the Indians who were participating in their first ever Down Under international match.

Bradman was at the crease on 99. Keith Miller was at the non-striker’s end. It was just before tea.

Among the expectant 40,000-strong crowd was a small 10-year-old boy and his father from the northern NSW town of Boggabri.

The tension was nearing fever pitch and when The Don, playing in his 40th Test match, pushed a single to mid-on off one of the crafty Indian bowlers, the SCG erupted.

It was Bradman’s 100th first class century, and a moment in history for the game’s most famous batsman.

It was no wonder that the young boy who witnessed that defining event should have had the rest of his life devoted to sport.

“Well who wouldn’t,” Fenton chuckles. “What a time to be there at the famous SCG as a young kid, with your Dad, and seeing the Don notch up that famous ton.”

“ My Memories of Bradman

And that epic sporting scene,

Are worth a thousand pictures

On a television screen.

By train and tram we travelled

When we made our way to town,

On the Sydney Cricket Ground.”

And as fate would have it, when Bradman died in February, 2001, Fenton was there at the special memorial service on the Don’s beloved Bowral oval where he recited that poem in full.

It’s just one of hundreds of great sporting moments Fenton has witnessed and written about over the years.

Last year, he and some likeminded mates, decided to hold a memorial lunch to commemorate the 100th anniversary of the death in the USA of legendary boxer Les Darcy.

And it was fitting that the lunch, which was celebrated again this year, would be held at the Lord Dudley Hotel in Sydney’s Paddington.

In his heyday in the early part of the 20th century, Darcy’s girlfriend was Winnie O’Sullivan whose family owned the iconic pub and where the popular pugilist would often help out at the bar pulling beers after a training session in a gym set up for him at the back of the pub.

“When one of our mates, John Scott and a few others, decided to hold the lunch we approached the current owners of the Lord Dudley and they were rapt in the idea,” Fenton told Go55s.

“There was already a special gallery dedicated to Darcy in the pub so it made an excellent venue with all the right memories and it was a tremendous success.”

In the past two years, the Darcy lunch has reached fabled status with some of the greats of sporting journalism and past champions attending.

Another one of the star guests both times has been rock n’ roll and Bandstand legend Col Joye (who was interviewed by well-known newspaper and radio journalist Frank Crook).

“Col certainly sets the place alight when he starts plucking his little ukulele and singing his wonderful old hit, Bye Bye Baby Goodbye, to which we all join in rather noisily,” Fenton laughs.

Fenton, who has written a book about Darcy titled The Legend of a Fighting Man, believes the young hero was much maligned during his final years.

“A lot of people claimed he shirked conscription during the First World War but at the time he wasn’t 21 and his mother wouldn’t sign the official permission papers.

“The boxing authorities tried to set him up as an enlistment hero to encourage recruitment for our forces but he couldn’t bear the thought of all those young Aussies being lured to their deaths on the bloody battlefields of France and Belgium.

“Les virtually had to leave the country illegally to go to the States and arrange some fights but of course in 1917 he developed an infection from tooth damage, got septicaemia and died in a Memphis Hospital a short time later.

“Even though the death toll among the Diggers was horrendous, there was a huge outpouring of grief when the news about Darcy’s death hit home and there were even accusations levelled at the US authorities that he had been poisoned, which wasn’t true,“ Fenton said.

“There was no doubt this kid from Maitland was one of the best boxers this country has ever produced and we intend to keep commemorating his memory at the pub which was a second home to him,” he said.

Fenton has mixed with the stars in many sports and was a successful coach in Sydney grade rugby union competition taking both the Parramatta and Eastwood sides to premierships in the 1970s and 1980s.

He was also coach of the famous Combined Sydney representative team from 82 to 85 which boasted such stars at the Ella brothers, Michael Hawker, Simon Poidevin, Nick Farr-Jones and Steve Williams.

Ever the fanatical supporter of the Australian rugby Test side, his rousing poem The Spirit of the Wallabies was said to have provided inspiration for the team’s first World Cup win in 1991.

Asked who he would rate as the best rugby player he’s coached, Fenton unhesitatingly says Mark Ella and another of his famous works of verse celebrates the talents of the three Ella brothers.

“I’m a bit of a league fan as well and followed the Wests Magpies for many years but the player I rated most in those days was Ray Price,” Fenton says.

Surprisingly, Fenton had a “real” career outside of sport .. he is a sound mixer for the movie industry and has been responsible for the sound tracks of many of Australia’s best-known features over the past 20 years including, Caddie, the original Picnic At Hanging Rock, My Brilliant Career, Gallipoli, Phar Lap and Evil Angels.

One of his more recent DVDs which was shown recently on Foxtel is Les Darcy, the Maitland Wonder while he has also had re-releases of Australia’s Forgotten Heroes—-The Southpaw (Vic Patrick), The Diva (champion racehorse mare Flight) and the Diggers (great warriors and gamblers.)

When he’s not fulfilling speaking or book-signing assignments, Fenton is these days patron of the Woy Woy rugby club near his Central Coast home, attending race meetings (his other passion) and working on new books of poetry and biography.

“I’ve had some wonderful memories and meet some great people, and not all of them were famous sports stars, and I have fond memories of them all,” Fenton says.

*For more information or to get copies of any of Peter Fenton’s works, go to his website or email him on fabfenton@gmail.com

Main Picture: Rock and Roll legend Col Joye warms up the crowd with a rendition of his great hit Bye Bye Baby (That’s him in the background picture in his Bandstand days). 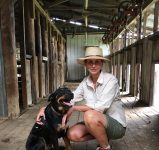 Include a Charity Week encourages Australians to consider gifts in wills