FROM THE GOLDEN SANDS TO THE MISTY MOUNTAINS

The ominous name seemed appropriate as the mists drifted across the craggy face of the mountain and obscured the valley beyond.

The ethereal mood was matched by the wide grey expanse of the swiftly flowing Tweed River just across from the NSW-Queensland border.

Light rain wafted across the low lying estuary adding to the sombre mood.

There was no noise except for the subdued warbling of the magpies and the far distant chortle of a group of kookaburras somewhere among the gum trees on the distant banks of the river. 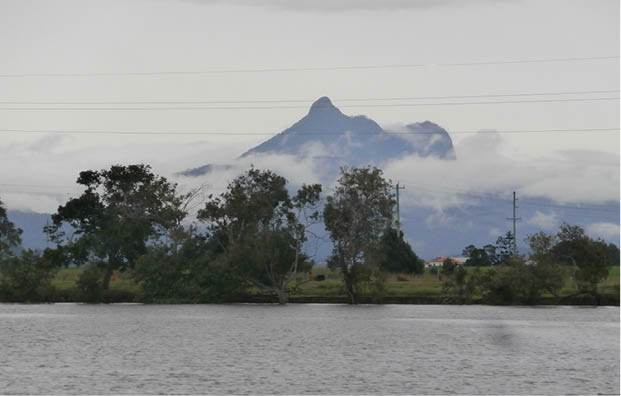 It was just the atmosphere we needed as we had beaten a retreat from the colourful hurly-burly of the nearby Gold Coast.

Known as the Aussies, there was a certain symbiosis about this year’s historic event in April… it was the centenary of surf lifesaving competition which started off on Sydney’s Bondi beach in 1915.

Running in conjunction with this celebration, was also the magnificently moving memorials to the Anzacs of 1915 and the Gallipoli landings 100 years on.

For those of us who didn’t have a direct link with the original Diggers, this display of national surf lifesaving had a special piquancy.

Each of the junior competitors was given a special certificate to mark the momentous occasion giving them a precious Anzac keepsake.

It was wonderful to see the highly trained kids in action, all wearing their distinctive colourful club caps and cozzies, throwing themselves into the surf swim, board and surf ski competition often in bumpy, tricky conditions along Kirra’s normally benign shoreline.

How deeply moving it was to reflect as we stood there on the sun-drenched golden sands, watching the cream of Australian youth exuberantly displaying their surf life saving skills, that many were of the same age as those young Diggers whose sacrifice we so recently commemorated. 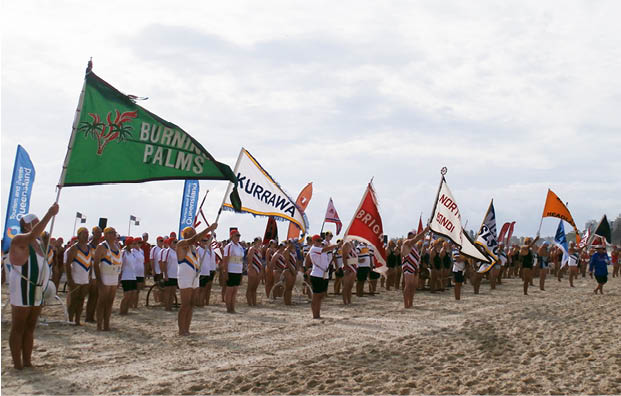 MAJESTIC: The March Past teams from around Australia line up for the big parade at the end of the Aussies competiton (the winners Kurrawa second from left)

There are many wonderful traditions among the events at the surf lifesaving championships but probably the most majestic is the March Past on the final day of competition.

The first of these events took place on Bondi Beach in 1915 as the original surf lifesavers, many of them soldiers recently returned from battlefields or due to embark on ill-fated troop ships, paraded proudly before the crowds.

They wore a special all-in-one costume in their club regalia, a tradition which has mostly remained to this day.

Whereas back in those distant times, the March Past was more a joyful celebration by competitors at the end of the championships, today the March Past is a far more technical event.

Up to 20 official judges line the parade route along the beach, each with their dreaded clipboards and pens, and scrutinise every arm, leg, head and reel movement as the teams march along to the accompaniment of the martial music of the local Pipe and Drums band.

It’s an absolute spectacle and you can’t help getting a lump in your throat as the teams pass by.

These days of course, there are women’s and juniors teams as well and they are a great complement to the more traditional line-ups of senior men who no longer take part in active competition but participate proudly behind their club banner.

This year’s event was won by Kurrawa, one of the nearby Gold Coasts clubs and former long-time hosts of the Aussies.

But that didn’t seem to worry a lot of the other teams some of them from Western Australia, South Australia, Victoria and of course New South Wales.

One of our favourite teams from Sydney is Queenscliff on Sydney’s northern beaches who are coached by March Past legend Ray Issacs and comprising our old surf lifesaving mate, Steve “Beauie” Beaumont.

A great raconteur as well as a veteran surf llfesaver, Beauie admitted that he was a bit nervous before this year’s competition as he had a call from his wife at home the night before the big event saying he’d forgotten to worm the dog! 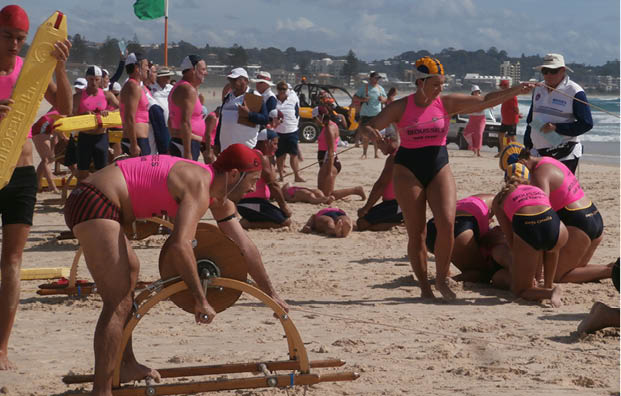 TEAMWORK: The Rescue and Resuscitation (R&R) teams show off their skills at the Australian Surf Lifesaving championships on North Kirra beach, Gold Coast

“Brings you down to earth a bit, doesn’t it,” Beauie admitted ruefully.

“Queensie” were celebrating a top 10 finish in the March Past and vow they’ll all be back next season to improve their ranking.

As well as the March past, and before the Open competitors strut their stuff, many of us take part in the more gruelling “Masters’” age group events, in the surf and on the sand.

Talk about age shall not weary them, even the older age groups among the men are fought out by fields of up to 20 competitors in many of the surf swim, tube rescue, and board and ski events in the water while on the sand in the sprints and flags, there are often several heats and semi-finals.

For example, in the Over 70s age group, there were eight blokes turning out for the leg-sapping 70m dash along the churned up beach track and for the flags elimination event.

I thought you’d never ask, but modestly yes, I must admit, I won my second major Australian title taking out the beach sprint gold medal and collecting a bronze in the flags.

It was a bumper season for me as I’d also pocketed gold in the Sydney Branch beach sprint and two golds in the NSW State titles at Umina beach.

So that was why I was still in a bit of a daze as we drove out of Coolangatta and headed to the peaceful hamlet of Tumbulgum along the Tweed to indulge ourselves in its serene beauty and meditate on our triumphs as we watched the swirling mists gradually lift off the dark loom of Mount Warning.

Next year’s Aussies 2016 have been re-located to the Sunshine Coast beaches of Mooloolaba and Maroochydore.

Somehow it won’t seem the same.

JD Salinger: the little-known legacy of one of the world’s most-read authors