THE GRUESOME EXECUTION THAT SHAMED SOCIETY

When author Caroline Overington began researching for her latest book and exploring the alleged double-murder-mysteries involving the last woman to be hanged in NSW, she knew she was in for a long haul.

For 50 years after Louisa Collins, aged 41, swung from the rope at Sydney’s Darlinghurst Gaol in January,  1889, for the alleged arsenic poisoning murders of her two husbands, all references to the execution seemed to become part of a massive cover-up.

There were few official records available and Caroline was forced to painstakingly backtrack her research through thousands of secondary documents and correspondence trying to pin down elusive references to the story behind the macabre events.

She knew she’d hit paydirt when she found a letter from the senior Crown prosecutor in the first trial, which had resulted in a hung jury, writing to the Appeals Court justices recommending that “this woman should not be forced to face another trial.”

It appeared to Caroline that society had wanted to bury the shame it felt after the relentless legal pursuit of the woman who became known as the “Borgia of Botany” and “The Botany Murderess”.

It was as if Sydney’s society had become sickened by the ruthless legal proceedings, the four murder trials, the baying of the popular newspapers for her blood, and that they wanted to forget the events which led to the noose being placed around the neck of the mother-of 10.

It had been 40 years since a woman had been hanged in NSW and even though there was a massive public outcry over Louisa’s apparently callous indifference to the horrific deaths of her two husbands, the majority of people had no stomach for the thought of a relatively young woman being condemned to the gallows. 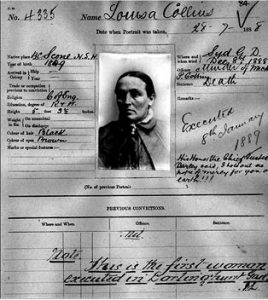 Caroline, a noted  author and award winning journalist, stumbled on the tragic case of Louisa Collins when she was asked by her then newspaper editor to investigate whether anyone had been tried more than once for murder in NSW. (This had been sparked by the mistrial decision in the case of Gordon Wood, who had been accused of throwing his girlfriend off Sydney’s Gap)

But in three of the four murder trials which ensued, the then all-male juries did not reach the required unanimous verdict.

“I knew when I found the letter from the prosecutor in the first trial admitting that Louisa should not face another murder trial, that the whole subsequent proceedings became a witch hunt which led to Louisa’s execution,” Caroline told Go55s.

“We have to remember that it was very much a male dominated society, all the juries were male, the judges were male, the leading politicians were male and in those days towards the end of the 19th century women were expected to behave in a certain way.

“Unfortunately Louisa didn’t conform to this view and even though she went on to give birth to 10 children (one of whom died), she got a reputation as a flirt and was suspected to having many lovers,” Caroline said.

When her first husband, Charles, a widower 13 years her senior, died in excruciating pain in February 1887, Louisa didn’t exactly behave like a grieving widow, She immediately claimed the inheritance, began throwing parties and flirted outrageously with one of her lovers, Michael Collins.

She fell pregnant to Michael and three months later they married.

Their child died after four months, and soon after Michael began to fall ill suffering the same symptoms as Louisa’s first husband.

Aware probably that she had outraged society by her callous indifference to Charles’ death, Louisa devoted herself to Michael and nursed him around the clock until his eventual death two weeks later.

The autopsy showed that he had died of “arsenical poisoning” and a later exhumation of Charles’ body showed the same probable cause of death.

She was arrested and remained in police custody for the next two years as the inevitable legal processes led her through three “hung-jury” trials until the fourth and final trial at which she was found guilty and condemned to death.

“By the fourth trial, and after a rabid public outcry led by the pro-hanging newspaper, the Sydney Morning Herald, the jury just gave in and delivered the verdict society seemingly wanted,” Caroline said.

Caroline, who studied law before entering journalism, explained that most of the so-called evidence which led to Louisa’s conviction would nowadays be either declared circumstantial or inadmissable.

“Both Louisa’s husbands Charles and Michael had found work in the Botany area as woolwashers which was a thriving industry in the area at the time but involved a high level of chemical toxicity with arsenic being prevalent in the sheepskin tanning industry.

“Botany was also a pretty squalid area, part-swamp, part slum, where people lived in rows of cottages with no sanitation and a communal pump. There was a lot of loss of life among the children in the area.

“Another factor which led to the lynch mentality against Louisa was that there had been a lot of poisonings and the male dominated society began to feel threatened particularly as women at that time were a wretchedly downtrodden part of society.”

After Louisa was convicted and sentenced to death, there was a certain groundswell of opinion that claimed it would be wrong to hang a woman and a mother, while others openly condemned her alleged deeds as barbaric and deserving of her eventual fate.

Some reports suggested that as Louisa walked calmly and quietly to the gallows, she may have confessed guilt to the prison chaplain but this was never substantiated and thought to be the concoction of newspaper reporters wanting to justify the gruesome deed.

It was shortly after 9am on January 8, 1889 that Louisa, dressed in drab prison garb, had been led from her cell to where the notoriously inept hangman known as Nosey Bob (because a horse had kicked off his nose) stood waiting and placed the noose around her neck.

A few minutes later, she was swinging from the rope with her head nearly severed from her body and her windpipe exposed.

“When I look back over the past five years when I began researching the story for my book, Last Woman Hanged, I knew it would become a labour of love and I think I’ve presented a convincing argument that there was a gross miscarriage of justice.

“Certainly, there wasn’t another woman hanged in NSW and for 50 years after her death, little was placed on public record as if society did feel the shame of it all,” Caroline said.

LAST WOMEN HANGED by Caroline Overington is published by HarperCollins Australia and available in bookshops. www.carolineoverington.com 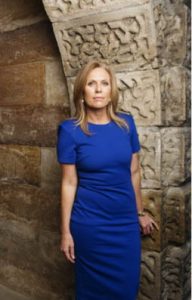