MAJOR MILESTONE FOR MEALS ON WHEELS 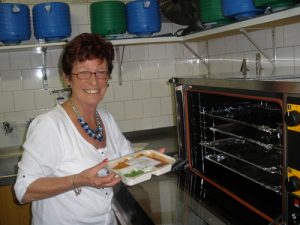 IT was one of the first visits Carmen Burton had to make when she signed up as a volunteer for Meals on Wheels.

She had to deliver the meal to an elderly gentleman who lived on his own.

“When I got to his place, no-one answered the door and after a while I had to give up. We contacted the man’s doctor to say we couldn’t raise him at home and the doctor advised we call the police,” Carmen remembers.

“Later I got a call from the local police asking me to come around to the house and identify the gentleman as they found him deceased,” she said.

“What a shock! I’d only been a volunteer for a few days so it was a nerve-wracking experience and a sad one I suppose as well.”

That was 24 years ago and although she’s not personally delivering meals still to this day, Carmen is the paid manager-co-ordinator of the Randwick Meals on Wheels, in Sydney’s eastern suburbs.

Recently the Randwick group celebrated their 50 year anniversary of delivering meals to the frail, aged and disabled in the local area.

Originally the depot based in a run-down, disused State Transit building, used to cater for almost one thousands clients in the Botany-Randwick and Waverly areas but in recent years has been concentrating on the Randwick area alone.

Carmen admits they don’t have too many dramas during the almost 200 meals that have to be delivered every day by the 80 or so helpers they have on their books.

“In a way, you’re not just delivering the meals to those in need, you’re also a bit of a good neighbour ready for a chat, a welfare officer who listens to their health complaints and a welcome friend as well,” Carmen says.

She says alot of her volunteers are elderly themselves, some who worked for her over the years are now recipients of the Meals on Wheels service as they can no longer get out and about themselves.

Many of them have been with the service for years, many others come and go on a regular basis but all of them share the same caring nature and willingness to provide for those in need.

“We get people from all walks of life, some real characters but they all have one thing in common…they love what they are doing.

“It can be a difficult task sometimes, finding the right address, some elderly people are a bit crotchetty and forget to leave the money out or something like that.

“And there are the different locations to deal with … in our area we have hundreds of decently-kept  homes  but there are also the housing commission blocks where the tenants can be a bit dirty and unkempt.

“We’ve had some boys from the local Marcellin College here doing their community volunteer work with us and the looks on their faces when  they have to take a meal into one of these down-and-out places is something to see,” Carmen laughs.

“They’re not used to seeing that side of life I suppose,” she says.

Mick took up the volunteering duties after he retired and says he gets a great personal boost from the job.

“We’ve  had our laughs and our sad times I suppose…the elderly people can be funny and forgetful, I‘ll occasionally have the door opened to me by a lady who’s got nothing on but the radio and I’ve had to hastily turn away while I handed over the meal,” Mick laughs.

“That reminds me,” chimes in Carmen,” I once got confronted at the door by a gentleman wearing nothing but a towel….I said to him,  if you drop that towel you’ll wear this meal!”

Mick admits he loves meeting the people and communicating with the elderly clients and is always sharing a laugh with them.

As a former postal driver, he says he’s used to driving around finding addresses and often will have a “runner” with him in the vehicle to do the delivery.

“I have a lady who is elderly and speaks only Cantonese and luckily enough one of our other volunteers speaks Cantonese so I always arrange to have her come along and while I drop her off at the lady’s place, I do another delivery or two so they can both chat away in their own language. I think that helps alot,” Mick says.

Are there any downsides to driving around doing the deliveries, I ask Mick.

“Bloody parking officers, they never give us a fair go,” Mick growls.

The majority of people who sign on for the meals on wheels service are “as good as gold” though says Carmen and really appreciate the volunteers helping them out.

“We cater for all tastes and dietary requirements, from diabetics to vegetarians, people who don’t like fish or pasta, for example, or someone who might not like, say broccoli.

“WE offer roast dishes such as lamb and pork, steak and kidney pie,  lots of vegetables, all sorts of wholesome meals.

“The meals are eight dollars each and most people arrange to pay monthly either in cash or cheque or their family members get it organised.

‘We offer a main meal which can be heated up plus a dessert and a juice or a supply of frozen meals which they can use as they wish,” Carmen says.

Each day Carmen arrives at the modest but scrupulously clean premises in Rainbow St at 5am and the 200-odd meals are delivered by truck from the suppliers, Flagstaff Fine Foods of Unanderra, near Wollongong.

The meals are then divided up among the day’s 80-odd volunteers who also may include people from the Centrelink system who have to perform some community service.

“These days people who want to volunteer have to undergo a compulsory police check before we can sign them on as part of the agreement with our funding body the Department of Ageing, Disability and Health Care.

“But I can honestly say in all the time I’ve been here, and in fact for the whole 50 years we’ve been providing this service in the area, we’ve never had any complaints about criminal behaviour or anything of that nature.

“In fact we don’t get many complaints at all….of course there are a few people who like to have a whinge about the food sometimes, but overall people enjoy the meals very much.”

“It’s great tucker,” chimes in Mick, “In fact, I enjoy eating the meals myself so I can heartily recommend them!”

Carmen says the Randwick depot has to vacate their State Transit-owned premises by next June when they will be based in a demountable before moving into specially-designed premises in the Matraville RSL in nearby Bunnerong Rd.

“The Matraville RSL people have been exceptionally kind to us in rehousing our organisation and we  can’t wait to get into our new premises and of course we’re always looking for more volunteers,” Carmen says.

“But after 50 years in this old building, it’s a bit of history that won’t be forgotten,” she says nostalgically.

It’s amazing to think that all over Australia, thousands of unassuming people like Carmen Burton, and tens of thousands of willing volunteers like Mick Alpin, are delivering hundreds of thousands of healthy food parcels to the frail elderly people who no longer have to leave their own homes because of the Meals on Wheels service.

For people who want to volunteer in the Randwick area, contact Carmen Burton on 9398 2731 or visit the Meals on Wheels website in your state.

Get off the Highway to another World…