MEMORIES OF A SAD DAY ON THE BEACH 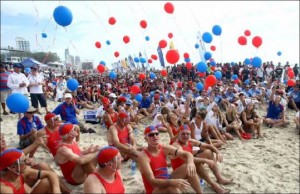 JOHN McNAMEE REPORTS ON A TRAGEDY

WHICH SHOULD NEVER BE ALLOWED TO HAPPEN AGAIN

IT creates an awfully numbing sensation when the sport to which you have virtually dedicated your life, is struck by tragedy.

So it was with the appalling death of young Saxon Bird, the 19-year-old surf lifesaver, killed in a freak surfski accident in horrendous conditions at the Australian championships in March.

From an early age, surf lifesavers are trained to deal with patients struck down with spinal injuries caused by dumping waves, with panicked swimmers caught in fierce rips, with horrific fin chop and even shark bite attacks.

But nothing prepares us for the sudden, shocking and totally unexpected death of one of the demi-gods of our sport.. a junior gold medal winning teenage ironman on the brink of national glory.

Saxon was so much like all the other kids his age in surf clubs around Australia….impossibly charming, unselfconsciously fearless, devoted to his family at home and to the whole family of his fellow surf lifesavers.

As we stood in silence on the beach at Kurrawa, on Queensland’s mercurial Gold Coast two days after the tragedy, his fellow club members from Sydney’s Queenscliff club released a host of red and blue balloons into the sky at the moving memorial service.

As I watched the colourful display ascend gently aloft, I could almost swear that the balloons began to shape out the letters “S…A…X…” in the sky.

Anyway, it was a memorial service that perhaps shouldn’t have happened.

Is any sport worth a life? Especially a recreation dedicated to saving, not losing lives.

Sure, in the months since the incident, those with sharpened hindsight have begun to lay the blame…to point the finger at authorities they felt had acted recklessly and carelessly in their duty of care to a young competitor.

In the months to come, the Queensland coroner, who is investigating Saxon’s accident, will no doubt reach a conclusion. It is not my task here to pre-empt his findings.

How can anyone of us predict what will happen in the surf? Or for that matter, on a gentle lake during a speedboat race? Or on a downhill mountain ski event?

Seasoned campaigners gathering for the Surf Lifesaving Masters events which preceded the Open carnival which was to end so tragically, had already began to have serious misgivings about the conditions at Kurrawa, notoriously a beach pounded by heavy surf and with tricky cross-currents.

We knew that before we even arrived….we were prepared for it.. we train all year to cope with any conditions thrown up by the unpredictable nature of the ocean.

Yes, we relish it…we were celebrating the fact that the Aussies, as the national surf lifesaving titles are called, were finally back in their spiritual home on the Gold Coast, after three years in the surf “wilderness” of Scarborough, WA.

But as we assembled for the first Team Manager’s briefing meeting on the Monday before the championships started, there was a pervading sense of concern over the conditions.

A state of nature caused by destructive low pressure areas further north still wielding their influence on beaches along the eastern seaboard.

So what’s the difference?

With cyclonic conditions, the surf pounds in with alarming frequency…the wave intervals are seldom more than two or three seconds.

Huge volumes of water are rushing in at breakneck pace far more rapidly than so called normal surf.

The breaking waves stretch further back from the shoreline…they create several banks of treacherous sand bars for almost 100 metres off shore.

The massive volumes of water stirred up thousands of kilometres away in the tempestuous north, hurtle towards the beach in never-ending, relentless formations. When the rollers reach the shallow water they have nowhere to go…in their fury they tear off in lateral currents along the ravaged shoreline, creating fierce undertows and “drags” just a few metres offshore… a trap for all surf competitors, let along those manning cumbersome surf boats and flimsy, needle-thin surf skis.

By this time, alarm was spreading…boats competing on the first day were being hammered in the shorebreak gutters, solid timber sweep oars were snapping like toothpicks, hardy crew members were being spilled into the broiling maelstroms, injuring several.

Despite a plea from a massed meeting of surf boat sweeps, after army commandos, probably the toughest of human beings, the championships were not moved to another venue.

Once again it is not my brief to adjudicate on whether this advice should have been heeded before the sad consequence later in the week.

My own personal decision had already been made….I swam each morning in the surf before the titles started and experienced the conditions first hand..I’m no wimp but I was seriously alarmed.

Luckily my specialist Masters events are mainly on the beach..the sprints, relays and flags. It was relatively easy for me to opt not to compete in my surf disciplines, the swim around the outlying “cans” and the rescue tube event.

Many of my mates whose speciality is the surf ski and board, joined me on the beach.

We’re too long in the tooth now to deliberately flaunt the vagaries of Mother Nature and risk life and limb in the uncertain surf. We know our limitations.

But youth is youth, in all its innocence and it dares to defy the odds. Who are we old sages to sit around over our coffees and red wines and shake our heads at its recklessness.?

Bloody hell, we were like that at their age weren’t we, we ask ourselves.

Ironically the wave that dumped Saxon causing a nearby surfski to strike him in the head, wasn’t especially large. But he had presumably been knocked out cold. It didn’t take long for the vicious littoral current to sweep him almost a kilometre down the beach, too late for him to be rescued. He had no chance.

Once again, I cannot presume to speculate on the matter or reach a conclusion before the Coroner ends his deliberations.

But whatever conclusion is reached, we must not let this tragedy occur again. Already this is the second young surf lifesaver to die in the surf at Kurrawa.

Fifteen-year-old Robert Gatenby was killed during a surf boat race in 1996 during the aftermath of another cyclone. His memorial stone underneath the trees behind the Kurrawa surf club, is now adorned with already fading floral tributes for Saxon Bird.

The heartbreaking truth is, our beloved surf lifesaving has been struck by the passing of another of our own young heroes…I hadn’t met Saxon Bird but I’d written about him and one of his mates, Tom Fraser-Holmes (now a champion pool swimmer), in several of my surf columns in The Sunday Telegraph a few years ago. He was destined to be another of our fabulous young heroes of the surf.

As we listened to the chaplain recite his words of prayer on that grieving stretch of sand, and among hundreds of our fellow surf lifesavers from around Australia, and as we listened to a young performer sing a sad song of farewell to Saxon, I looked up again at the red and blue balloons rapidly now dwindling into the clouds and yes, they were definitely forming the letters “S..A..X”.

I pointed this out to my teammates and we all looked up and whispered: Farewell Saxon, Prince of the Waves.

THE SAD YOUNG HERO WHO ADORNS OUR SURF CLUB WALL