IT MIGHT NOT BE PARIS….BUT ITS CHARM IS UNIQUE

Do you realise you can rent a charming one-bedroom apartment near the Champs-Elysees in Paris for $A990 a week?

For a couple of hundred more, you can get a two-bedroom, two-bathroom unit in the trendy Marais district also for a week?

I know they are not a five-minute walk through the tea-tree to the beach but we’ve been paying up to $1400 for a week’s stay in a small basic cabin in holiday parks along the NSW coast.

For roughly that same price, often much less, you can get 10-night cruises aboard luxury liners up into the Pacific islands or down the east coast to Tasmania.

I know, I know…. you have to factor in the airfares to get to these start-off points in the first place but you see the point.

Are we, as Aussies who love holidaying in our own country, getting the right bang for our buck?

I mean it’s only about $A3,500 for a spectacular tour of the Canadian Rockies aboard their famous Rocky Mountaineer train across some of the North American continent’s most stunning scenery and it includes seven nights luxury hotel accommodation.

We recently tried to re-book into a Gold Coast apartment block right on the beach that we have been going to for more than 30 years.

Usually we get a one-bedroom apartment with balcony for about four or five nights for around $1000.

This time when we tried to book they told us that we would have to have a two-bedroom apartment for seven nights which would set us back about $2,500. We checked on their website and there were one-bedroom units available.

Now for that price, we could go to Hawaii and back with a week’s stay in a luxury Waikiki hotel for less than that and a day trip to the Banzai Pipeline.!

Don’t get me wrong…staying in a holiday park these days can be a very pleasant and relaxing experience….but there’s still the “cheek-by-jowl’ factor of being only a few metres from the people next door who’ve brought their dog along, love sitting outside listening to their radio, having noisy mates around drinking a few coldies and getting up at 4am to go fishing.

And of course it’s easy to say that for the same price as a week in a holiday park cabin, you can sail down the Rhine valley listening to a string quartet playing Beethoven and sipping chilled chardonnay from a fluted crystal glass. 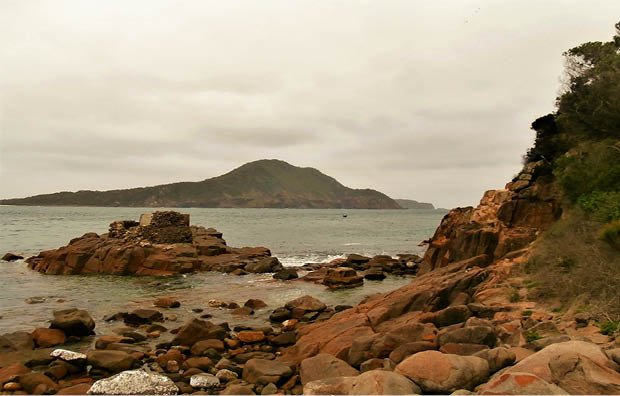 But not everybody wants to go through the hassle of travelling overseas even though buck-for-buck you’re getting a far better deal.

Frankly, a lot of us just want to throw the esky in the boot, pack up the thongs, t-shirts and shorts, strap the mal on the roof-racks and head up/down the coast.

According to a recent survey published recently in the Sunday papers, only 12 per cent of Aussies have been to every state and territory and one in 20 never leave their home state.

It’s all very well for the local tourist chiefs to say we should spend more time exploring Australia, but when you compare the prices of say a few days in Broome, Kakadu, Uluru or the far north cape, the costs involved are horrendous.

I must admit for that short break from the routine, staying a few nights in a holiday park ticks a lot of boxes. The cabins are beautifully serviced, everything works, the staff are terrific and although due to their location there’s no ocean views, most are only a short stroll to the nearest surf beach.

During our recent renovations at home we escaped to the Shoal Bay holiday park at Port Stephens on the NSW north coast.

We were able to book into a Catamaran luxury villa for four nights at a cost of around $179 a night which goes up to $259 a night in peak holiday time.

But you can do deals and whittle the costs down but it’s still a bit of an ask for what you get. As I mentioned before, privacy can be a big issue and there’s always a lot of coming and going as cashed-up Grey Nomads arrive with 10-metre long caravans or in massive Centurian tank-like Winnebagos backing up and manoeuvring skilfully into incredibly tight spaces guided by crackling walkie-talkies and a lot of friendly banter.

But the location itself makes up for it….as an old fisherman said to me on the beach early one morning: “Shoal Bay is one of the most magical places on earth.”

The bay’s generally placid waters make it extremely safe for swimming and snorkelling and you can walk around to the Tomaree headland past the once-prohibited grounds of the mental health facility to the rocky point with its historic World War II gun emplacements.

Another great spot to visit just a short drive from the holiday park is the Nelson Head Heritage Lighthouse and Reserve. This commands majestic views across the entrance to Port Stephens.

The museum itself contains many intriguing artefacts from when the lighthouse was in full operation and from when the area was used as a naval base.

There’s also the Marine Rescue base there with its fully equipped UHF radio setup and you can spend some time chatting to the dedicated volunteers who keep a 24-hour watch on the NSW coastline.

It’s also a pretty spectacular spot to have a cappuccino and a slice of cake at the Tea House before you venture forth.

Unfortunately we were not able to take the popular ferry across the bay to the hamlet of Tea Gardens  and have lunch on the banks of the pretty Myall River as the earlier service was cancelled and the boat was fully laden. 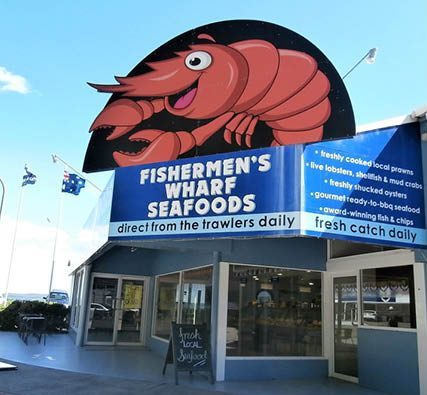 The brochures boast there are many points of interest in the Port Stephens area…five minutes drive away is Fingal beach, ideal for swimming or when the swell’s up for a surf or a paddle. There’s also the breathtaking Gan Gan lookout, whale and dolphin cruises from Nelson Bay marina and day trips to the outlying Broughton and Cabbage Tree islands with their wonderful fishing grounds and seal colonies.

Speaking of fishing, just as I was finishing my early morning swim at Shoal Bay, a beach fisherman had just landed a fairly good-sized flounder.

“There’s breakfast for you eh mate”, I said.

“I’ve been here every day this week and this is the only bite I‘ve had, “ he laughed as he put the flapping catch into his bucket of sea water and walked back to his campsite.

Funnily enough, about ten minutes later, he’s back again with his bucket with its still flapping flounder. “You wouldn’t believe it,” he said ruefully to me, “but we’re leaving today and the wife’s packed up all the cooking stuff. I don’t suppose you want it yourself mate do you, you’re welcome.”

“You’re very kind, “I said, “but thanks all the same, I appreciate you asking me.”

He then tipped the fish back into the water, shrugged his shoulders and walked back up the beach.

I guess a magical moment like that would never happen at that charming apartment on the Champs-Elysees, now would it.

*Travel information quoted was published in the Escape section of the Sunday Telegraph.

Pic 3: Popular Seafood Venue With Friendly ‘Lobby’ On The Wharf At Nelson Bay

Holiday parks not just for kids!