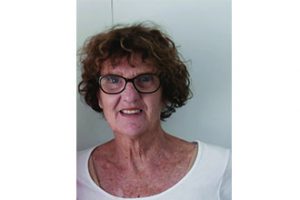 A 73year-old grandmother who spent a terrifying four hours trapped in her high rise unit  bathroom hopes her ordeal will help save lives in the future.

Maureen, a widow, prefers not to have her full name published or the location of her unit but wants her story told to help prevent similar potentially fatal incidents.

The mother of three and grandmother of four, accidentally locked herself in the windowless and concrete-walled bathroom of the unit in an inner-city hotel/self-owned apartment block.

A week after the event Maureen, a part-time social and pastoral worker, was still recovering from the emotional trauma and heavy bruising on her hands and arms as she had frantically tried to free herself from her “cell” using a pair of tweezers and nail scissors.

For more than four hours, she paced the tiny bathroom dreading that she would still be trapped at nightfall as she feared the light globe would go leaving her in absolute blackness.

”I was screaming and shouting at regular intervals, saying ‘Can someone please help me’ as the horror of my situation became apparent,” Maureen told Go55s.

“At one stage I climbed up on a stool in the shower recess and tried shouting through the fan outlet, but I got no response,” she said.

It was only through the dogged perseverance of her barrister daughter Reeta that Maureen was eventually freed when she was.

“I didn’t know how much longer I could bear it…I had a clock in the bathroom and I could see the time passing. At one stage I heard my phones ringing in the living room but I couldn’t get to them.

“In my desperation I tried to first unscrew the lever handle of the door with the tweezers and scissors, to no avail, then I tried the latch connection on the door frame but that wouldn’t budge and then I tried to get the hinges off.

“I was battering the door trying to be heard, and I climbed up on the toilet seat shouting through the ventilation shaft but I suddenly realised I could make matters worse if I fell over and injured myself.

“The bathroom in this building is typical of other high rise blocks…they have no windows and everything, floors, walls, ceiling, is solid concrete…like a vault.

“So I had to calm myself down and try to think it all through…I used to think I was quite claustrophobic but in a way I was pleased that I didn’t descend into despair or major panic.”

Maureen’s nightmare began when she went into the bathroom to prepare her makeup before she was due to be at a local hairdressers at 10am.

She lives alone in her unit and she admitted that for some reason, this time she closed the inward-opening door to allow her more room inside.

She said the lever door handle gave a funny clunk as the door closed and she feared the worse.

When she tried to open the door again it wouldn’t budge.

“Oddly enough the handle had been playing up over the past few days but stupidly, I didn’t get the maintenance people up to repair it.

“So that’s a good lesson for everyone else…don ‘t hesitate to get faulty door fixtures fixed as soon as you can.”

There was a wall-phone in the bathroom but the service had been inexplicably disconnected to all units in the building some years before.

Luckily, Maureen had arranged to ring her daughter Reeta at 12pm as they both had the day off and were set to meet up for lunch.

Maureen heard her phones ringing at 10.30, while she was trapped inside, a half hour after her appointment at the salon, and she learnt later it was the hairdresser calling to find out where she was as she was a regular and punctual client.

And when the phones started ringing again after 12pm, she knew it would be her daughter trying to find out where she was.

“Reeta didn’t know which hairdresser I went to but God bless her she Googled every salon in the area and after the fourth or fifth try she struck gold and spoke to the girl who told her I didn’t turn up which was very unusual.

“Reeta then knew something serious was up and she rang her brother who lives in the same unit block as mine.

“She told him to stay on the phone and to use his key to my place to go and find out what was wrong.

“By now it was after 1.30pm and I’d been trapped inside sobbing and screaming since 9.30am.

“Both Reeta who lives several suburbs away and her brother were dreading what they’d find.”

Maureen explained that the two of them feared the worst as their father several years ago collapsed and died of a sudden heart attack on his isolated riverside farm property and was not found until 24 hours later.

“As I heard the doorbell ringing, I hoped it would be my son and it was and I yelled at him to say I was OK but to get the maintenance men up to let me out. “As soon as they came and opened the door I collapsed into their arms sobbing and shaking..then I went onto the sofa and curled up in the foetal position…I was a mess and covered in bruises but I was free and when my daughter came rushing in we all broke down in tears and huggings.”

Maureen said the committee of her unit block were quick to arrange for all locks in the unit bathrooms to be changed and for the phone service to be reconnected.

“They brought me up scones and jam and tea afterwards and they have never tasted better,” Maureen said.

“I had plenty of water for those long lonely hours but of course no food. I wondered how long I could have survived if things hadn’t turned out the way they did.

“They people on the maintenance committee have been wonderful and didn’t hesitate putting these precautions in place… and now I’m recovering well I think my ordeal is a good lesson for people, not just the elderly, to ensure this situation doesn’t happen to them.

“I’ve been speaking to a lot of my elderly friends, many of them who like me live alone in high rise unit blocks, and they’ve been horrified and have been urging their house committees to check locks on their bathroom doors as well.

“Since then I’ve taken to leaving my mobile phone on charge in the bathroom and have installed a stopper and door chock, just in case,” Maureen laughs.

“But the most important thing is that now all my children have become much closer when they realize that their mother could have died alone like their father.

“We all now make sure we text each other several times during the day and although they have young families of their own, we’ve all forged another special link..which is beautiful.”

“But I would never want to go through another nightmare like that and I hope it never, ever happens to anyone else and that high rise unit owners get the message and put the appropriate procedures in place.

“It could save someone’s life.”

What’s gone out with the dodo?

Norfolk Island but not as you may have known it