THE ‘PHANTOM OF THE OPERA’ MASK THAT HELPED BARRY BEAT CANCER

Throat cancer survivor Barry Eaton says having to wear a “Phantom of the Opera”-type mask for one of his treatments was the most harrowing of all the experiences during his long battle against the deadly disease.

The breath-stifling mask which is molded on to the face of the patient is designed to keep the head still and protect other areas of the throat during the grueling radiotherapy process.

“Apart from the fact that I have breathing problems and also suffer from the fear of claustrophobia, it was a very unpleasant experience,” Barry told Go55s.

Barry’s ordeal began about four years ago when he noticed a lump developing in his throat.

“At first I thought it was just something caught there and that they could remove it with a pair of tweezers.

“But I soon found out from the specialist that it was actually a cancerous throat tumour,” he said.

“My life changed drastically from that moment I was told as the very word cancer is enough to send a chill up anyone’s spine.”

As a well-known radio broadcaster, astrologer, spiritual medium and journalist, Barry, now aged 74, thought his whole career would be over as he was told there could be damage to his vocal chords during the intensive cancer treatment.

“They fit this mask to you to help prevent other areas of the throat being affected. It’s pretty hideous and scary having it moulded on to you.

“Just to get the horrible rubbery-jelly type stuff slopped all over your face, neck and shoulders while you’re lying stripped to the waist on a tray as they make the mould, was one of the most harrowing parts of the whole ordeal,” Barry said.

But helping Barry cope through the seven weeks of radiotherapy treatment was his deep belief in the holistic healing qualities which he could call on while he underwent the mainstream procedures.

They allowed him to maintain a positive approach to his fight against the dreaded cancer and he credits his “alternative” procedures as being vital to his survival.

“What helped me in overcoming the fear of having the mask on for that period of time, was turning to hypnotherapy. And thanks to my friend Judith Richards, it worked.

“The worst thing about getting a cancer diagnosis is the fear it instils in the person…the Big C, it’s the end of the world, you don’t know if you can cope,” he said.

“But being able to combine the mainstream and alternative therapies and afterwards write a book about my experiences, I hope will help alleviate this fear and inspire people to take a positive role in their healing.

“Too often people just follow the medical advice, which is fair enough, but there are a lot of things they can do to help them through the crisis,” Barry said.

Barry’s book, “The Joy of Living—Postponing The Afterlife’, which include chapters written by his long-term partner, Anne Morjanoff and son Matt, has just been released and is an inspirational story  and highly positive chronicle of a cancer survivor’s unique approach to the overall healing process.

“I’m not telling people they should start meditating or adopting the processes that helped me through,” Barry said.

“What I am saying is that there are many ways to conquer the fear that people feel as they begin the journey.

“Over the years I have preferred such treatments as acupuncture, osteopathy, bush flower essences, natural medicine and spiritual healing,” Barry writes of his initial reaction when told of his diagnosis.

“During deep meditation I received explicit instructions from my master guide whose wisdom has played an invaluable role in my life.

“My decision made (to combine mainstream and alternative) I then agreed to radiotherapy, following my guide’s recommendation. I refused chemotherapy. I could then open myself up to the full range of holistic solutions and trust that my footsteps would be led in the right direction. They were.”

Barry also taps into the use of mystical rune stones to which he was introduced more than 25 years ago.

The rune stones , which date back to the Viking era, are placed in a bag and are drawn out one by one by the user. The message on the particular stone can be interpreted by an accompanying book.

“I suppose some people would be a bit cynical about following messages from a bag of stones,” Barry laughs.

“But I found them to be an invaluable way of tapping into my inner wisdom. Each message I received from the stones during the course of my treatment proved uncannily accurate.

“They clarified some of my inner turmoil and helped me understand what was happening at the time,” he said.

Of course Barry admits that as a long-time psychic intuitive who doesn’t believe in the run-of-the-mill type of daily coincidences, his relationship with his own spiritual world means he is better equipped to get the best out of these therapies.

He runs his own interactive internet radio programme Radio Out There where he shares his musings on the spirit world. He has also studied mediumship at the Arthur Findlay College in the UK and has written extensively on his expertise in astrology, travel and spirituality.

Some of his earlier books have received international acclaim and he has been interviewed on the popular US programme Coast to Coast.

He stresses that not all people will be comfortable plumbing their own depths during such critical times of their lives but he says just “visualising” something else while you’re undergoing scan treatment for example, can help pull you through.

“I had 35 separate radiotherapy treatments over seven weeks with about 30 minutes each time strapped onto what they call the doughnut tray in the PET cylinder and with that mask on,” he says.

“I was told not to cough, to lie absolutely still on my back otherwise any movement could end up damaging other areas such as my vocal chords.

“It was a bit of a struggle as I have been having uncontrollable bouts of coughing for about 25 years even though I’ve never been a smoker so I used to visualise while I was in the chamber that I was in Paris or somewhere,” he said.

Barry thinks that his time as a compere of various sporting dinners and functions back in the 1980s where he spent hours in smoke-filled rooms, could have caused him to suffer from passive smoking and maybe even contributed to the throat tumour.

Fully recovered these days, Barry’s “radio” voice still sounds as mellifluous as it did when he was a presenter on Sydney’s 2GB radio station which he says is a miracle after all the treatment he received.

He lives in Mullumbimby in northern NSW in the foothills of the mountains and is still kept busy with his radio show and speaking on the lecture tour about his spiritual journeys.

“I’m one of the lucky ones I guess…my cancer was caught in the early stages but as I said I’m not telling people to use the same methods I do, but what I am saying is when you’re faced with this type of drama, take some self-responsibility and come up with you own ways of overcoming that awful fear that you inevitably feel,’ Barry says.

“It’s also important for people to seek the support of their family and loved ones…I  cannot underestimate the value of the help and care offered to me by my partner Anne or son Matt. They were definitely a big part of the overall healing process.” 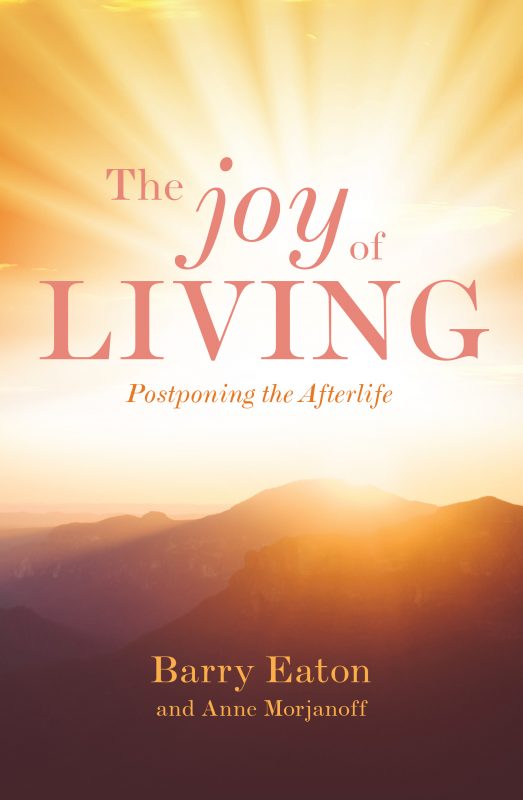 The Joy of Living – Postponing The Afterlife, by Barry Eaton and Anne Morjanoff. Published by Rockpool Publishing. Released April 2017. RRP $27.99

Staying Young at Art at NERAM