A rare 1954 Austin A30 is getting a new life in the hands of car enthusiast and retiree John Adderton.

The vintage car, one of just 100 A30s remaining in Australia, was discontinued in 1956, but John has painstakingly restored it to full working condition.

After buying the bare body shell in 1998 for the low sum of $100, John took the opportunity to rebuild the car with original model parts. 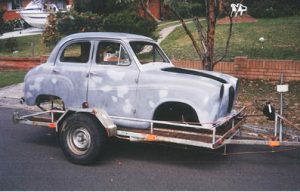 “When I decided to get an Austin A30, I looked around and bought one but the car was rusted and totally worn out,” John said.

“I was offered the body shell of another at Lithgow, and it was so good that I bought it immediately.”

An avid car enthusiast who has owned several vintage Austins throughout his lifetime, John is a long time fan of the A30, which was originally designed as a cheaper competitor for the popular Morris Minor.

Now living at Glengara Retirement Village on the Central Coast, John says that the beautifully restored car gets quite the reaction from other residents. 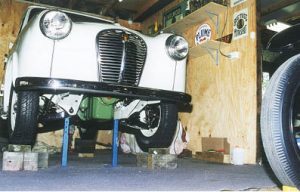 “From the first day we had the A30 parked on the drive outside the garage, many of the residents have wanted to know more about it, and some had even owned one themselves.”

After sixty years, the car is still in top condition thanks to John’s careful attentions. It gets a regular workout with long trips down along the Murray River to attend vintage car rallies and exhibitions, and is even booked in for its first school formal in late 2015.

In the meantime, the rare car is a perfect way for John and wife Judy, who first met through a mutual passion for vintage cars in 1963, to explore the Central Coast after moving into their retirement villa in July 2014.

“Just the other week, we took it from Glengara to Newcastle just for the day,” he said. “We both love the little car.”

The restored A30 has served the couple well, and John and Judy are looking forward to plenty more road trips in the future.

What’s on When on the Road