Ted and Barbara Smith bought a farm in the New South Wales Southern Highlands as a retirement hobby and set to work creating the best possible environment for growing truffles. Having found Australia’s largest ever truffle on the farm last year, the retirement is very much on hold as they field domestic and international enquiries now truffle season has begun. 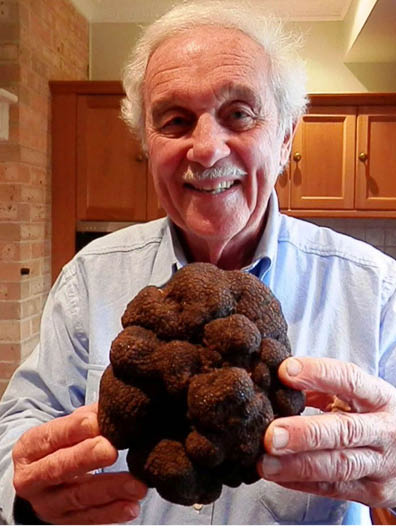 The enormous specimen, weighing in at 1.172kg, is just 128 grams shy of the current world record, a 1.3kg truffle grown in France.

Mr Smith said he received interest in the record truffle from right across Australia and from one interested Asian buyer but decided he wanted to allow locals to savour it.

He sold the truffle to Robin Murray of Bowral’s Centennial Vineyards Restaurant, for a little less than his original asking price of $2500.

Winter in the New South Wales Southern Highlands town of Robertson doesn’t just mean the time for open fires and woollen socks. It also heralds the very short truffle season, and this year it has started earlier than usual.

Truffle farmers Ted and Barbara Smith say this year is shaping to be their biggest yet.

“It’s always exciting going into the truffiere, because you have no idea what you’re going to find,” Ted says.

Also check out the Canberra Truffle Festival  there will be  participating venues across the region offering the opportunity to taste and experience our prized truffle, with events ranging from gourmet degustation dinners, truffle dishes at cafes, pastries, cooking classes and demonstrations, wine tastings and matchings, farmers markets, truffle hunts and more! There were more than 350 individual events last year, held across a region spanning more than 200km wide.