The history of Gin in London 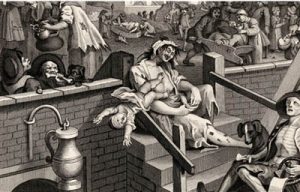 WILLIAM OF ORANGE King William of Orange drops the tax on spirit production for the health of the nation and to utilize a surplus of grain. Gin was born in a city gone mad for punch. Punch houses proliferated after British sailors returned from India, introducing this magical potion that takes its name from the Hindi word for ‘five’ and named for its five components. The formula changed, of course, to make use of local ingredients. But the service, in large bowls for groups or in glasses for individuals, remained the same.

Gin meets gingerbread, a pairing that endured for over a century and a half. Wherever gin was sold to the public it was sold with gingerbread. When the River Thames froze over, you could be sure to find a few tents selling hot gin and gingerbread. At any fair or public execution (which is what people watched before the birth of Sky Sports), vendors erected dozens of gin and gingerbread stalls amongst a few sausage stands that catered to the posh set.

Madame Genever moves to Gin Lane: Hogarth’s famous illustration was one of a pair funded by the brewing industry to illustrate that beer consumption was far healthier for individuals and for society as a whole than drinking gin. At this time a few sweet styles of gin began to emerge as well as infusions. Mixed drinks were primarily medicinal. However, doctors of the day discovered it was easier (and far more lucrative) to offer pleasant tasting remedies.

Jean Jacob Schweppe first brought carbonated water to market. This ingredient went on to revolutionize long drinks. Ironically, he saw his invention purely as a medicinal aid and developed five different levels of carbonation to be prescribed by doctors for various digestive ailments.

BIRTH OF THE COCKTAIL

The earliest-known use of the word “cocktail” in print appeared on 20 March 1798. A tavern owner at the corner of Downing and Whitehall won a lottery and in a fit of generosity erased his regulars’ debts. London’s Morning Post and Gazetteer printed a satirical list of who owed for what in the heart of British politics. Pitt the younger, whose premiership was marked by the French Revolution and the Napoleonic Wars owed for “Huile de Venus”, “Perfait Amour” and “cock-tail (vulgarly called ginger)”. This last drink was not French, but presumably took its name from a pair of remedies given to horses of mixed breed, whose tails were cut short or “cocked” to mark them as such.

Gin Twist takes London by storm. One man was so moved by this simple drink he penned a 149-line poetic tribute. Another wrote a shorter poem, saluting both the drink and the previous poem. Both appeared in London newspapers. The drink itself was Gin Toddy with lemon juice, garnished with a twist to show that the lemon juice was fresh—a luxury not taken for granted in the early 19th century.

THE BIRTH OF THE GIN AND TONIC

Created as an anti-malarial for British troops serving in India, it proved such as success that no one takes a chance today, even in areas where there has never been a case of malaria. Better to have a Gin & Tonic, just to be safe. At this time in London, a French chef also changed the world of mixed drinks. Alexis Benoit Soyer created the first jelly shots, blue drinks, sparkling cream cocktails, and more at his Universal Symposium of All Nations, a sprawling restaurant on the site where the Albert Hall stands today.

Nautical gin drinks, the Gimlet and Pink Gin dominated the seas around this time. Rose’s Lime Cordial emerged in 1867, and Angostura Bitters found its way into gin around the same time.

The first British drinks book to contain a section of cocktail recipes appears. William Terrington’s Cooling Cups and Dainty Drinks featured a gin and ginger pairing, called a Gin Cocktail. At this time, ice was all the rage and the back cover of Terrington’s book carried an ad for the Wenham Lake Ice Company, which exported ice from Boston and offered both home and hotel delivery within London as well as a range of ice chests.

THE BIRTH OF THE MARTINI

The birth of the Martini cocktail. This simple gin drink was among the first created and consumed purely for pleasure, and the anesthetic effect that clearly demarked the end of the workday and the beginning of the evening’s revelries. It began as a surprisingly different drink, combining equal parts gin and Italian vermouth. It was also called a Gin & It—a drink that is delicious but unrecognizable as a Martini today.

Thirsty Americans, and out-of-work American bartenders descend on London at the start of Prohibition in the United States. Although the party was already in full swing thanks to London’s Bright Young Things, these new arrivals ensured no Jazz Age London party was short of attendees.

… Ian Fleming introduces one of his own creations, the Vesper Cocktail. He and his friend Ivor Bryce created this variation on the Martini Cocktail in Jamaica. But it is purely British and finds its spiritual home in London’s hotel bars. Fleming’s books and this cocktail defined sophistication for generations to come.

The cocktail becomes cool again. Dick Bradsell begins training a generation of young bartenders after reading David Embury’s The Fine Art of Mixing Drinks and becoming inspired to master the art of mixing himself. This revived the nightclub cocktail, transforming it from spirit drowned in tonic or fruit juice to elegant and simple creations.

Molecular meets retro in the cocktail’s true Golden Age. If the cocktail ever had a steampunk era, this is it. Rotavapor vacuum stills are employed by bartenders sporting Victorian sleeve garters. Molecular is, at its heart, an understanding of capabilities. Can one ingredient be introduced as a vapour? Or can it stand next to the rest of the drink on its own? But what makes this time period truly exciting is that at no time in history have drinks been as good as they are today. The ingredients have improved immensely. Seasonality is a thing of the past. Bartenders are studying, reading, and researching as never before. Social media means that a discovery in London can be applied behind a bar in Sydney within minutes. Thus, this is the new cocktail Renaissance www.sipsmith.com

Too Sweet? Consuming too much