SYMBOLISM OF THE PINEAPPLE

The pineapple has served as a symbol of hospitality and warm welcome through the history of the Americas.

Christopher Columbus wrote the first account of a western encounter with the pineapple in the journal of his second discovery voyage across the Atlantic. He and his men landed on the Caribbean island of Guadalupe where the sailors enjoyed this sweet, succulent new fruit, which had already become a staple of native feasts and religious rites.

In 1493, Columbus first brought the pineapple back to Renaissance Europe that was largely devoid of sweet foods, including fresh fruit. The pineapple’s exotic nature and sweetness soon made it an item that soon acquired both popularity and curiosity for centuries after its European arrival. For two centuries, as European horticulturists struggled to perfect a hothouse method for cultivating pineapples in Europe, the pineapple became even more a coveted commodity. In the 1600s, King Charles posed for an official portrait while receiving a pineapple as a gift. 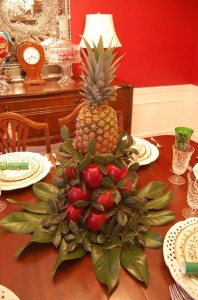 In colonial America, hostesses would set a fresh pineapple in the center of their dining table when visitors joined their families in their homes. Visiting was the primary means of entertainment and cultural exchange, so the concept of hospitality was a central element in colonial life. The pineapple, then, symbolized the warmest welcome a hostess could extend to her guests, and then often it also served as the dessert for the meal. If the visitors spent the night, they would be given a bedroom with a bed in which pineapples had been carved on either the bedposts or the headboard — even if that was the master bedroom. 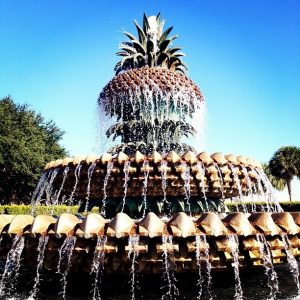 A small, peaceful hamlet in rural Alabama boasts symbols of the pineapple everywhere your eyes may look. Pine Apple, settled by “Easterners” from the Carolinas, Georgia, and Virginia around 1820 was originally named “Friendship”. But there was already another Friendship, Alabama, so the settlers named their town in honor of the pine and the apple trees that gave the land its beauty and the town its wealth. These days the town’s name is as often written “Pineapple” and it is Pine Apple. Signs of this universal symbol of hospitality are seen painted on the front doors of homes and the town’s welcome sign, carved in fanciful finials and Christmas decorations, atop gate-posts and roof-tops, carved into bedposts and head-boards, and found in a variety of table centerpieces. Other carved items found around southern homes include serving trays and wooden bowls.

Not only have wood-carvers etched this immortal symbol, but the delicate hands of needle-workers have preserved this symbol in family heirlooms over the centuries. Items such as pineapple samplers, table cloths, and crochet doilies are but a few of the items found in homes of unbounding welcome. Modern decorative items include pot holders, towels, small framed accents, drink coasters, decorative flags, brass door knockers, curtain finials, stair-rail and mailbox posts, and welcome mats. 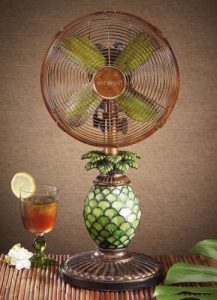 The pineapple has been a universal symbol of hospitality and welcome for many centuries all over the world.

Creative food display became a competition among the hostesses, because it declared her personality and her family’s social status. Hostesses tried to outdo one another in creating memorable dining events. In larger, more affluent homes, the doors to the dining room were kept closed to create an air of suspense and excitement over the preparations of the hostess. Colonial grocers sometimes rented pineapples to hostesses desperate to create a dining experience above their financial means. Later, once that hostess had returned the pineapple, the fruit would be sold to more affluent clients who could afford to actually buy and eat it. Regardless of ones financial ability to actually buy and eat the pineapple, however, visitors to the homes that displayed the pineapple felt particularly honored that the hostess had spared no expense to secure one in their behalf. 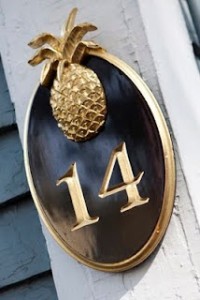 By the Gilded Age, which was the era in which Samuel Couples lived, through the present day, the pineapple became a familiar symbolic image of welcome, good cheer, and warmth and affection between all who dwell inside the home. 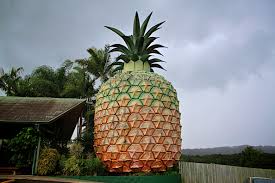 And of course our very own Big Pineapple in Coffs Harbou

King Charles II of England posing for his royal portrait while being gifted a pineapple by the Royal Gardener, John Rose, 1675.(1)

Travelling abroad when you are 50 is the new 30!