DOWN THE TRACK, THE GLORY DAYS OF THE STEAM TRAIN…

JOHN McNAMEE REPORTS ON AN EPIC NEW RAILWAY BOOK..AND STILL FEELS THE SOOT IN HIS EYE!

It was the early hours of the morning of January 25, 1885 and the main passenger and mail train from Albury was approaching the railway bridge over Salt Clay Creek, about 150kms out of Narrandera.

Heavy rain had been lashing that part of the New South Wales countryside for several days and visibility was poor.

The train was packed with passengers, many heading to Sydney to attend the Randwick races the following day.

The embankment supporting the south-west rail line had collapsed leaving only unsupported tracks.

The doomed train plunged three metres down into the swollen waters of the creek smashing its boiler and sending wrecked carriages over a wide area.

There were dead and dying everywhere. As it was a relatively remote area, it would be hours before any emergency services could get to the scene.

The injured and those tending them were forced to lie out in the pouring rain while they awaited treatment. Miraculously, only eight people died and 20 were injured.

The accident shocked the nation as the railway industry was thriving in that part of the late 19th century and efforts were made to improve track safety and visibility for the locos’ drivers.

It’s ironic that former Federal MP and railway enthusiast Tim Fischer should preface his new book, Steam Australia … Locomotives That Galvanised the Nation with a childhood memory on that very same stretch of rail line.

In his preface to the spectacularly illustrated book, he writes: “It appeared as a tiny speck way off to the east, coming over a big hill on the horizon. Gradually, it grew in size until it could be made out as a hard-working steam locomotive, hauling the South West Mail passenger train into Narrandera station.

“……The train was a sight to behold with smoke and steam billowing as it clickety-clacked along this key regional standard-gauge line of the NSW Government Railways….

“It was 1956, and school holidays. I was 10 years old and doing some trainspotting, standing on the Newell Highway overbridge, craning my neck to observe all the colour, action and movement. From my vantage point I could look down directly onto the footplate where the fireman was hanging up his shovel, the hard work done now as the driver applied the brakes.”

What wonderful memories are conjured up by that description and how many of us of Tim Fischer’s vintage can recall similar vivid experiences of those mighty magical behemoths.

Going on school excursions and sticking our heads out of the windows of the train as it wound its way around a bend, hissing and snorting, thundering across the rails as the sleepers whizzed past in a blur, and sending back clouds of smoke and of course, the dreaded soot which inevitably lodged in our eyes.

Or going through long, seemingly endless tunnels and scaring the other smaller kids in the dark until the locomotive burst out of into the daylight again with a triumphant blast of its hooter.

Or if you lived near a railway station, lying in bed at night and listening to the spooky sounds of the giant locos being shunted, puffing and panting into the nearby sidings.

In his book, Fischer writes: “Steam dominated the country’s transportation for nearly a century before the arrival of small, medium and large diesel electric locomotives. It provided vital haulage for freight trains, mixed goods and overnight mail trains through the rapid expansion of the diverse Australian economy, especially between 1850 and 1901.”

But perhaps the most notorious problem of the early railway was the multitude of gauges used throughout the Australian rail network…there were 22 different track widths in different states and interstate travellers were forced to change trains sometimes several times during their journey.

As Fischer points out in his book, Albury became the big “break of gauge” station between Melbourne, Sydney and Canberra and stories abound of the famous and not so famous passengers who suffered the frustrations of changing trains often in the middle of the night at the NSW-Victoria border town.

In 1895 the famous American humourist Mark Twain , visiting Australia – was forced to change trains at Albury around dawn and wrote sarcastically: ‘Think of the paralysis of intellect that gave that idea birth.”

“He strongly objected to being routed out of bed by lantern light to make the change across the platform,” writes Fischer.

“Even to this day I often recall the many VIPs who have had to change trains there over the years: people such as prime ministers Edmund Barton, Billy Hughes, Robert Menzies and Ben Chifley (a former steam train driver.) Dame Enid Lyons, Sister Mary MacKillop, Sir John Monash and US General Douglas MacArthur (who hated flying); artist Russell Drysdale (who famously painted a tired Second World War soldier waiting on the platform) and cricketing legend Sir Donald Bradman.

“In 1931 hundreds stood on the platform to pay their respects as Dame Nellie Melba’s coffin made the trip from Sydney to Melbourne.“

Another great saga in the history of Australian train travel was the introduction of the iconic Spirit of Progress…whose maiden journey celebrated the first standard gauge route between Melbourne and Sydney in 1962.

Steam locomotion has had a colourful history since its first trains arrived in Australia in 1854. Fischer’s book chronicles the building of the great rail lines that linked the prosperous gold mining centres such as Bendigo in Victoria and which involved the construction of two major tunnels one at Elphinstone (385m long) and the Big Hill tunnel (390m).

Wool, wheat and coal were also major industries which relied heavily on the interstate rail network as Australia continued to prosper and more and more rail lines were being built across the nation.

Steam Australia covers the commencement of the rail lines in all Australian states and takes us into the very workshops themselves where the giant iron monsters were assembled from the early days of the 20th century to the 50s and 60s as they gave way to the diesel and electric networks.

Some of the famous trains whose history is vividly brought to light in the book, as well as the Spirit of Progress, include the famous Puffing Billy, the Robert Gordon Menzies and the Ghan.

The book graphically illustrates these great passenger trains with more than 300 striking images culled from the archives of the National Library of Australia.

Tim Fischer writes in his introduction: “This book is dedicated to all who used steam over the decades in Australia and especially those who travelled to and from the First World War and all other conflicts by steam-hauled trains.”

It will certainly take you back in time to the glory days of steam….and to this day, sometimes I reckon I can still feel the sting of that soot in my eye ….. 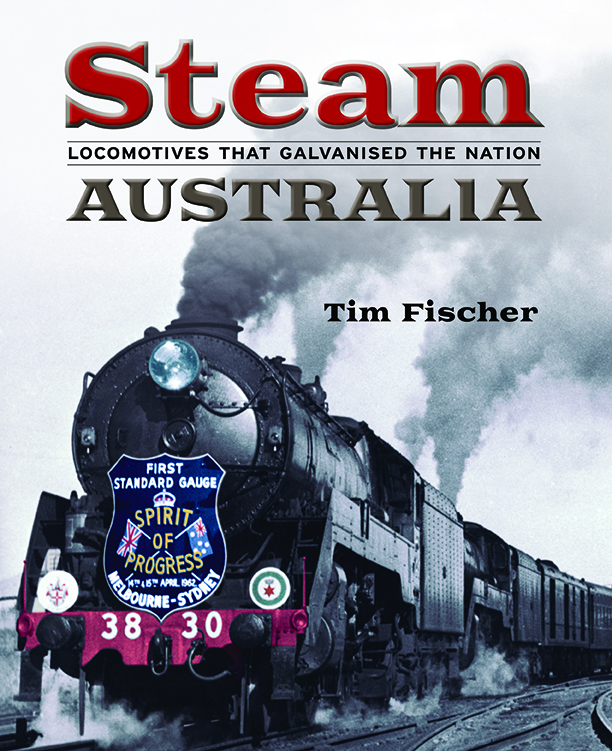 Tim Fischer was born in Lockhart, NSW in 1946. He was conscripted into the Australian Army in 1966 serving in the Vietnam War with 1RAR. He entered NSW State Parliament in 1971 and switched to Federal Parliament in 1984. He became Nationals Leader in 1990 and Deputy Prime Minister in 1996. He was appointed as Ambassador to the Holy See in Rome in 2008.

He has been a successful book author for some years maintaining his interest in rail transport by leading rail tours in Australia, Europe, Russia and South Africa.

He has recently been battling a major illness but keeps up his interests in farming, charity work, biking and bush-walking.

Wilder than the Wild West