The Tragic Flute: Why You’re Drinking Champagne All Wrong

Let’s get something out of the way: Marie Antoinette’s left breast was not the inspiration for the Champagne coupe, which is enjoying a minor comeback, thanks to its palm-sized bowl and retro good looks. The origins are murky, but the coupe dates back to at least 17th-century England, nearly a century before the French queen and her legendary cleavage.

It’s a sexy bubble to burst. Here’s another: The coupe is a terrible vessel for drinking Champagne — a slosh-prone, top-heavy bowl that concentrates neither the carbonation nor the bouquet. And if you’re warming chilled wine with your hand, you’re definitely doing something wrong.

No wonder, then, that the flute, with its slender stem and tall, unbreastlike bowl, is the gold standard for Champagne. Right? Wrong.

Antonio Galloni, a wine critic and founder of website Vinous, speaks for many in the hallowed French region when he says: “If you go to Cristal or Krug or Dom Pérignon, no winemaker is going to say, ‘Here’s my wine; taste it out of a flute.’ It’s not used at all.”

Ironically, Dom Pérignon himself (a Benedictine monk born in 1638) has been credited with adopting the flute for Champagne so that he could “watch the dance of the sparkling atoms.” But Olivier Krug, Krug’s house director and great-great-great-grandson of the founder, insists, “A great Champagne cannot offer its fullest expression in a narrow glass.”

Cédric Bouchard — named Champagne’s finest winemaker in 2008 by the Gault & Millau guidebook — acknowledges that the flute showcases the stream of bubbles that rise from the bottom of the glass. “But,” he adds, “it doesn’t allow the aromas to escape nor the wine to breathe.” Both the flute and the coupe, Bouchard surmises, “were first used and continue to be utilized with the idea that Champagne is something to be seen more than tasted.” 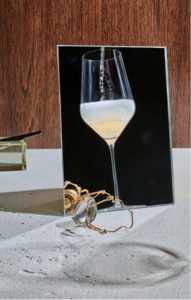 In Italy, one of the largest Champagne consumers in the world, it’s always served in a wine glass, Galloni says, “as an acknowledgment that Champagne is a wine.” As such, he advocates “responding to the grape” as one would with any other wine, thinking of a chardonnay-based Champagne as a chardonnay first and a Champagne second. For a blanc de blancs (100 percent chardonnay), he likes an all-purpose white-wine glass; for a blanc de noirs (usually 100 percent pinot noir), he’d choose a larger Burgundy glass, like Riedel’s Sommeliers Burgundy Grand Cru, to accommodate the tannins, structure and what he calls the “amplitude” of the wine.

“There is something nice about the flute,” Galloni allows. “It’s like a skyscraper. There’s something elating and uplifting about that long glass. But if you drink a really well-made wine out of a flute, it’s like wearing a shoe that’s a size too small.” And like a shoe — small or not — a flute can be a status symbol, Bouchard points out. “In a restaurant, other tables will notice right away that you’re drinking Champagne if it’s in a flute, whereas in a white-wine glass, the identity of the beverage is not so easily distinguished.”

For Brian Kalliel, the sommelier at Mélisse — a two-Michelin-starred restaurant in Santa Monica, California, that boasts a roving Champagne cart — it all boils down to expectations. “I drink Champagne in something bigger,” Kalliel says, “but to push that in the restaurant is a little bit snooty.” Leave the educating, he says, to “Wine Spectator and places like that.”

Or to Helen Johannesen, beverage director at Los Angeles restaurants Animal and Son of a Gun. Johannesen takes Champagne so seriously that, for a while, it was the only wine on the menu at Son of a Gun, and you won’t find a single flute at either restaurant. Johannesen has found that once the advantage of a white-wine glass is explained, customers are “totally fine with it.”

What’s on When on the Road