WHY DON KEEPS GETTING THE JUMP ON LIFE…. 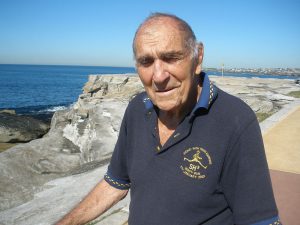 TIME TRAVELLER: 90-YEAR-OLD DON GRENVILLE ENJOYS THE SUN AND SURF NEAR HIS SYDNEYHOME IN BETWEEN HIS WORLD TRIPS

As Don Grenville was being strapped into his parachute ready for his thrilling skydive adventure, he realized he would be leaping out of the aircraft at 12,000 feet…more than twice the height of his previous jumps.

And for the first time, he would be doing it with an instructor in tandem.

“They wouldn’t let me jump on my own … fair enough I suppose but it was a helluva lot higher than I was used to,” Don told Go55s. “I’d been previously used to jumping from about 3,000 feet.”

This time, as well, Don would be free-falling for a giddying few minutes before the tandem instructor pulled the chute ripcord.

“Suddenly we were out of the plane and falling. I remember how very quiet it was, just this whooshing noise for a short while.

“I remember thinking how fast we were dropping in the free-fall but then the chute opened and we drifted down spiraling gently with the wind before touching the ground and landing on my feet…what an experience!”

The Skydive jump from Singleton airport over the HunterValley in NSW was pretty special for the former wartime Army paratrooper.  It was organized for Don by some of his mates to celebrate his 90th birthday.

Since he was trained as a paratrooper back in the mid-1940s when World War Two was still at its height and Japan was threatening the Australian coastline, Don had only had one other jump, back in 1985 when he was 62.

But this latest adventure had extra significance  for Don, not only to mark his milestone 90th birthday but also to pay tribute to many of his wartime buddies who died in the war and whose ranks have been dwindling ever since.

“There were only about nine of us marching last Anzac Day”, Don said, “there were a few others travelling in taxis, but there’s not many of us left,” he said.

Don’t think they had to forcibly drag Don off his couch to get him on this latest escapade…for the past 60 years or so Don has been travelling around the world as a member of the legendary and international Hash House Harriers running organization. 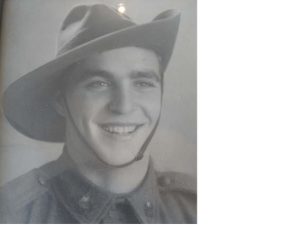 ACTION MAN: DON GRENVILLE AS A YOUNG INFANTRYMAN IN 1941

“We never hold races as such, as there’s no winning and losing but we travel to meets as far apart as Hobart and Brisbane in Australia, to Borneo, Kenya and Ghana for example. Mostly we’re in the older age brackets and we run, jog or walk over a set course such as a bush trail and then all meet up afterwards for a big social function…it’s great fun and I’ve made friends in many countries.”

The Hash House Harriers group was formed in about 1937 in Malaya by some servicemen who wanted to keep fit running and they’d all congregate later in a local “hash house” or cheap food joint.

Since then it has become a global phenomenon and more recently opened its ranks to the ladies with the formation of the Hash House Harriettes.

Currently, Don is in South Africa’s Zululand taking part in a local bush trail event that takes them close to  the region’s famous rhino national park.

“There’s a lot of wildlife around that neck of the woods and although I haven’t done any serious sprinting for about fifty years, I might need some leg speed if we get chased by any lions or such beasts,” Don laughs.

Don’s always had a “bit of toe” and as a Life Member of the North Cottlesloe Surf Life Saving Club in his native Western Australia, he’s won local, State and national beach titles back in the 1950s, and 60s.

He also played Under 19 Aussie Rules for Nedlands and rugby league for Cottesloe before the war. After the war he spent several decades working with the Bureau of Statistics in Perth before moving to Sydney.

In recent years, Don has been competing in national and international athletics events and in the 2009 World Masters Games in Sydney registered for the 1500metre race at the Betty Cuthbert Stadium in the Olympic Park at Homebush.

He got a mate to sign him up for the race but unfortunately there was a mix-up and Don ended up having to compete instead in the 10,000 metre road race!

“I’d never run that far in my life … it nearly killed me and I was cursing my mate… but in the end  I got the silver medal,” Don says proudly.

“I’m not sure how many will be in my age group but a lot of Europeans live to ripe old ages so I’ll have my work cut out getting a medal,” he says.

Born and raised in West Australia, Don waited for his 18th birthday in the dark days of wartime 1941 and enlisted in the Australian Army, 2/11 Infantry Battallion and a short time later after his training period, sailed on the Queen Mary to the Middle East. 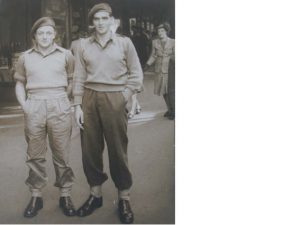 He doesn’t talk much about the horrors of those battles but he fought in Palestine and Syria before returning to Australia and signing up with first the Commandos, and then later the pioneering 1st Australian Paratroop Battalion based at Tocumwal on the NSW/Victorian border.

“I had a poisoned foot when I applied for the Commando Regiment so I got knocked back and finally got accepted for the paratroopers.

“By the time I’d done my regulation number of 2000 feet jumps from the RAAF’s DC3 aircraft  and we were trained up to an incredible state of fitness by our instructors, we were literally leaping out of our skins for some action,” Don recalls.

“The war was still raging with the Japanese threatening us and there was talk that our battalion was earmarked to deploy to Borneo to rescue the Australian prisoners of war who were perishing in their thousands on the infamous Sandakan death marches.

“We were all keen to go but the mission was aborted at the last moment and then there was talk we would have to be dropped over Singapore to relieve the mass evacuation of 1942 but that didn’t happen either,” Don says.

Don never got to jump in “action” but many of his comrades did and never returned…so naturally his wartime memories are still vivid and even more so since his 90th birthday in March when he did his Skydive jump.

“My mates in the Hash House Harriers are saying they’re saving up to shout me a jump on my hundredth birthday but I’m not too sure about that,” Don laughs.

Don’s lived on his own in Sydney’s eastern suburbs since his marriage broke up 40 years ago but although he’s got grandchildren and great grandchildren still in WA, says his family members now are his friends all over the world in the Hash House Harriers.

He laughs, but says: “Well, all my life I’ve kept extremely fit and active, so you never know your luck!!”

The sorry state of our country’s so called leaders