Why The So-Called Grey Nomads Are Seeing Red! 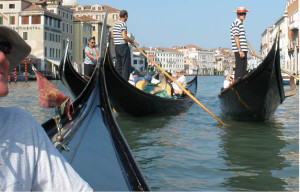 John McNamee reports on an obsession that’s driving us into a global odyssey.

In a recent media release Ms McKay pointed out that the over 55s generally resent stereotypes such as grey nomads and being treated as if we are old and infirm.

Apparently according to her, we’re all a bunch of out-of-control thrill seekers queueing up to jump out of planes, ride Harleys over desert terrains, wrestle crocs in the Amazon, surf the Bonzai Pipeline in Hawaii and bungee jump from bridges soaring over bottomless chasms.

We’re just not happy anymore to gas up the Winnebago and the Toyota camper vans and hare down the Hume to the Great Ocean Road or up the Pacific to Coffs or Port or even Byron for a counter lunch at Strop’s old pub, the Railway (is it still there?).

Ms McKay’s impeccable research reveals that more than half the over 55s tourism demographic looks for stimulation, freedom and adventure when we go on a travel experience.

And we’ve actually become victims of our fitter, healthier and more active lifestyles.

(The over 55s) have refined and sophisticated needs, expect higher standards of accommodation quality and comfort, more tailored and personalised travel and tour options and more opportunities to be more active and adventurous,” the prescient Ms McKay glowingly reports in her media release.

We have to admit it…it seems we’re condemned by a fierce uncontrollable wunderlust, an age denial X-gene factor, which drives us from the sybaritic comfort of our plasma-TV lined lounge rooms out into the byways, the dusty Silk Roads, the Bedouin caravan routes, the endless autobahns seeking a dream location, the Trans-Siberian Railways…..
Well it’s true I suppose.. most of us just can’t wait to crowd on to massive Airbus A380s to exotic locations… to walk tightropes across the Niagara Falls or follow the migration trails of the wandering wildebeeste.

In Italy on a coach tour last summer we bumped into a retired orchardist from central Victoria who hadn’t been to Uluru, Adelaide, Alice Springs, Kakadu or the Sydney Opera House but had twice visited New York, San Francisco and Washington, was currently on his third tour of Italy, was almost on first name terms with His Holiness himself, had just returned from a month’s cruise of the Mediterranean, spoke knowledgeably of the Acropolis and Parthenon, and was next year heading back to France, Spain and Portugal to run with the bulls or something equally dangerous.

But Jack, have you been to Broome, the Bass Strait or Ningaloo, Margaret River, Dream World, the Ettamogah Pub,” I asked in horror as we were sipping an ice cold Peroni Lager on a bridge overlooking the Grand Canal in Venice.

Haven’t got time,” he replied. “Too busy seeing the world…we’re planning to do India and the Taj Mahal next season…”

I mean what do you do..the bloke was probably in his early 70s and his missus late 60s but boy, they never flagged in the 40 degree mid-summer Italian heat.

What’s driving us to these extreme lengths?

We’re not happy unless we’re out gallivanting around the world, spending the kids’ inheritance, pretending we’re not really missing the beach back home, or the boys in the pub on Friday night, or the New Inventors on the ABC or Getaway on Channel 9, or that the back-breakingly mind-numbing 26-hour flight to Europe is just like a trip up the F-3 to Gosford in a stretch limo.

It’s bloody not..it’s hell and the bigger the jumbo jets or whatever they call them now, get, the more bodies, screaming babies, new age mums and dads with criminally undisciplined toddlers rampaging up and down the aisles ignoring the strained indulgent smiles of the harassed cabin crew, overweight snorers packing into the seat next to you, the more the travel nightmare becomes.

And it’s not all sweetness and light and wafting maidens soothing you with cool libations when you get there anyway.

Every tourist attraction from the Vatican to the Arc de Triomphe to the El Prado museum is choked with seething crowds jostling and elbowing their way up narrow alleyways only meant for a pre-Christian era donkey cart.

And another thing…seeing Europe is wonderful…but why do you have to pay 50 euro cents to use a public toilet for example and face the scowling wrath of a fearsome dunny denizen who won’t let you through the grimy turnstiles unless you’ve crossed her bony palm with silver?

Why do you sometimes have to queue up for up to half an hour or more to use these dubious facilities which are generally of a rather primitive plumbing ancestry?

Tour guides tell you that you should spend a few euros for a drink in a little cafe and ask to use the toilets instead of trusting to the public facilities.

Some of them were little more than festering holes in the ground, which may well have been all the vogue when Caesar’s legions were garrisoned there, but a couple of centuries of hard use had rendered them nothing more than cholera infested, noisome cesspits.

Do many of the top tourist spots in Europe have toilets for the unwitting, desperate travellers such as ourselves, but hidden away behind home walls they have their own sweet smelling, bright porcelain, marble tiled bathrooms straight out of Home Beautiful?

They must have… even the nations with centuries of tradition behind them would surely be too ashamed to show the world the state of their public toilets.

I must say the Brits do it better..for a start they don’t charge and generally their motorway facilities are clean and respectable.

OK so I’ve got all that off my chest…now I have to rush….just packing the bags, the missus and I are off to the US for an everglades cruise in Florida …can’t wait to ride that fan boat on the alligator infested swamp!!

A Young Soldier’s Letters From The Front