A Tale of Two Buried Cities 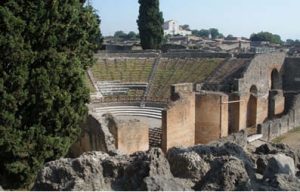 IT was mid-morning and the mid-summer sun had yet to reach its full baking glory but already the heat was shimmering across the cobblestones as they stretched away into the hazy distance ahead.

We were standing at the entrance to the Via dei Molini, one of the main thoroughfares in the ruins of the ancient city of Ostia Antica, at the old mouth of the Tiber river, about 30kms west of Rome.

Just off to the left were the fabulous columns of the Tempio di Diana….dedicated to the goddess of the hunt.

As we shaded our eyes and looked along the rows of cypresses lining the roughened edges of the roadway, we could almost hear the juddering wheels of the Roman chariots being whipped along the deep ruts by an impatient centurion eager to carry his news from the frontier wars. I am transported up there behind him on his speeding two-wheeled conveyance.

Straining my ears I can hear the raucous shouts of the celebrating legionnaires and immediately I am whisked into the world of Spartacus, of Ben Hur, of Quo Vadis, Samson and Deliah and more lately the Gladiator and other such classic Hollywood epics of the Roman era.

My Aussie Koala canvas hat becomes a glimmering golden helmet complete with swaying scarlet plumes and my long cotton T-shirt a toga. Around my shoulders I feed the weight of the crimson robe billowing behind me as I ride along imperiously in my chariot scattering townsfolk, merchants and noisy children aside.

We were on a month-long tour of Italy and were scheduled at the end to visit the buried city of Pompeii, one of the world’s busiest tourist sites. Weeks before we were due to go there however, and wandering around Rome on our own before hooking up with the tourist group, we made a remarkable discovery…. the ancient Roman town of Ostia Antica.

Although Pompeii has for obvious reasons its own brooding presence, overshadowed as it is by the smouldering outline of its nemesis volcano, Vesuvius, it is in walking the cobbled streets of Ostia Antica where we felt more akin to the daily life of the ancient Roman.

Ostia (meaning “mouth”) was founded in the 7th century BC by the reputed fourth king of Rome, Ancus Marcius and served over the centuries as the main harbour for Rome and into which flowed its vital supplies of grain, spices, slaves from Africa and trade goods. Because of its coastal proximity, it also did a roaring trade in salt.

Its earliest ruins date back to the 4th century BC although those mostly visible today are from the 3rd century BC and include the mighty temples to Rome’s major deities, Jupiter, Juno and Minerva.

It might have something to do with the fact that it is far less crowded with tourists than Pompeii and also you can stray off the beaten track at Ostia and become totally immersed in the jumble of fallen columns, stonework and ruined temples, shops, houses and amphitheatres.

In one out of the way terrace, almost hidden behind a low ceilinged dwelling, I discovered by crawling under a low lintel, that I had entered a former bathhouse, complete with massage tables, and benched “sauna” room.

Its remarkable central heating system was still in evidence with the funnelled interior walls leading from the basement hearth around the rest of the building.

The terracotta piping system was open and ducted so you could see in principle how it heated up these fascinating structures. The basic technology is much the same today.

In Pompeii, you can’t get into most of the dwellings (except with an accredited guide) as they are all roped off and you certainly couldn’t wander as freely among the ruins as you can at Ostia.

Pompeii of course has a much more sinister aura about it because of the devastation caused by the AD79 eruption of Vesusvius which buried its population, and embalmed its hapless citizens, their children, their pets and their households under an ash-shrouded pall frozen in time. More than 2000 people perished where they stood on that fateful day.

Ostia on the other hand was originally the ancient port of Rome but over the centuries it was abandoned and resettled many times by various civilisations including the Goths and later the Druids. It was regularly sacked by marauding pirates.

The gradual silting up of the Tiber estuary meant that it could no longer be used as a port in the imperial era and its fate was sealed. Huge areas of the old city became buried under the marshes preserving them to this day in much the same way as the choking sulphurous ash preserved the corpses and dwellings of Pompeii.

Ostia and its sister harbour city of Portus were almost completely wiped out in the second century AD due to earthquakes and freak floods. Roman civilisation ceased there at the fall of the Empire in the 9th century, when the city was again sacked by Saracen pirates.

It wasn’t until the 16th century that the site almost completely vanished when massive floods forced the mighty Tiber to change its course and much of Ostia fell victim to the encroaching marshland.

Much of the major excavation to resurrect the city occurred under Pope Pius VII (1800-23) and his successors under the direction of the famed Roman archeologist Rodolfo Lanciani. In more modern times, Mussolini ordered major excavations in the 1930s and 40s.

To this day, some of its biggest buildings, the Castrum, are almost completely intact in their skeletal form of course.

Sadly, over several centuries including up to the Middle Ages, many of its marble treasures were looted and transported to help build other more significant Italian sites such as the Leaning Tower of Pisa.

What we found most fascinating about Ostia were the restored black and white mosaics covering the floors of main of the buildings just off the various streets.

Unlike Pompeii, you don’t have to have a local tour guide and you could digress at will into these areas and walk around the the various structures to admire the amazing artwork.

We’d gone to Ostia on a short and reasonably cheap train ride from Rome’s central Piramide metro station to Rome-Lido early in the morning before the crowds and it was one of the best moves we’d made. Entry fees are about 7 euros (abt $A13).

Not knowing at that time what to expect in Pompeii with its rigidly structured tours, we relished the freedom to wander around Ostia and allow our imaginations to soar.

Apart from the majestic temples to the gods, the brothels, the fountains and bathhouse, we also discovered what we decided must have been one of the earliest fish and chip shops ever created.

You could see the slash marks made by the fishmongers embedded into the marble slabs which formed the shop’s streetside counter.

Nearby were the water fountains and troughs where the daily catch was washed and gutted.

There were also the almost completely intact public toilets (“latrinae”) with their neatly rounded out bowls on which centuries of Roman backsides rested for the daily visit of ease and where no doubt the gossip of the day was swapped.

I also mounted the majestic steps of one of the remaining amphitheatres and from the top declaimed in Shakespearean fashion: “Friends. Romans, Countrymen, lend me your ears”, clearly startling a group of German tourists about 50m away but causing much amusement to groups of English speaking visitors who applauded me enthusiastically.

There was such a wonderfully relaxed feeling wandering around Ostia and it wasn’t until weeks later when we arrived with our busload of fellow tourists at Pompeii that we realised how spoiled we had been.

Mush as been said about the tragedy of Pompeii and of course the pall of sudden and agonising death still lingers as we wander in groups around the unearthed dwellings, speaking in hushed tones.

But there is also an overpowering sense of majesty about the place…at the time it played no significant role in the history of the mighty Roman Empire, but all around the place you can sense the civic pride and arrogance of the citizenry, then at the peak of imperial glory and prosperity.

Most popular visiting areas are the brothels, resplendent with their saucy murals depicting the various pleasures offered by the establishment and often “signposted” by a magnificent terra cotta phallus.

As you wander around, you know inevitably that at the end of the tour is the sight you have been most dreading.. but nonetheless perversely curious….they are the plaster casts made of the hapless victims caught in the horrific rigors of sudden death, their limbs contorted, their faces and bodies twisted in their final rictus of pain.

The horror of it all leaves you gasping and breathless, and the searing 40 degree Celsius temperature when we visited combined with the brooding presence of Vesuvius, gave some slight empathy with the plight of these incinerated victims.

If you stand on one of the high points of the ruined city you can see the original layout of the site with its most outstanding structures being the villa of Casii, a wealthy patrician, whose home was known as the House of the Faun because of its namesake statue.

Many of the other villas still show evidence of lush furnishings and decorations.

Whereas Ostia’s history was written and rewritten by its various resident civilisations after the fall of Rome, Pompeii was found intact and the excavations of its time-capsule fate, have provided ancient historians with an almost exact record of daily life in those times.

And for that reason and because of its dreadfully violent end, Pompeii will always have its morbid fascination and its grimly epochal role in the history of the ancient world. But I think if I ever had to return to one of those ancient sites, I think it would have to be Ostia, not just because there are no hordes of tourists but because of its majestic simplicity and charm.

And I reckon what they should do is get one of those Roman chariots thundering down the flagstoned streets every so often, just to get that Ben Hur atmosphere again!