Love of the Hunter

Thanks to the recent opening of the Hunter Expressway, Lovedale is now the gateway to Hunter Valley wine country. A relaxed two-hour drive from Sydney, and around 40 minutes from Newcastle, Lovedale is home to a collection of lovely (pardon the pun) family-owned and operated boutique wineries, vineyards, cellar doors, and a host of great restaurants and accommodation options. It’s quiet, immensely friendly and produces some awesomely good wines.

Australia’s oldest continuously producing wine region, the Hunter Valley is famous for its stunning Semillon and Shiraz, and while it’s considered to be one of the warmest, most humid and wettest viticultural climates in the country, it overcomes these challenges to produce high quality, internationally renowned wines.

Lovedale vineyards predominately grow Semillon, Shiraz, Chardonnay, Verdelho and some Pinot Noir, and the wineries craft other varietals from fruit grown in other regions.

Many of the winemakers and vignerons are locals born and bred, with winemaking and farming stretching back in their families for generations. Others have made a change in career or lifestyle and left the city to join them – making for an interesting mix of characters.

Looking back on Lovedale

The origins of the name Lovedale can be traced back to 1885 when John Wright purchased the land near what is now Capercaillie and Allandale wineries. It changed hands again in 1859, and was then purchased by James Love in 1868, and sold by his son in 1923 to two young dandies, Reginald Bancroft from the Yorkshire Dales and his friend Rupert Cousins, who named it ‘Lovedale’ after the Love family and Reginald’s home.

Unfortunately, after some tough years where storms destroyed the grape crops, and economic hardship during the American prohibition (they were exporting to America), the vines were ripped out and the property turned over to a dairy and pig farm. However, as the years passed, others saw the merit of the area and once again braved the uncertainty of planting vineyards.

Also named after the original landowners, and a very integral part of Lovedale’s history, is the McWilliam’s Mount Pleasant Lovedale Vineyard (on Wine Country Drive) selected by the legendary Maurice O’Shea in 1939 and planted after World War II in 1946. The first Mount Pleasant Lovedale Semillon was made in 1950, and we can thank O’Shea’s incredible foresight, and recognition that the unique structure of the land and the surrounding environment would deliver world-class Semillon and a wine many consider to be Australia’s greatest white variety.

In addition to its award-winning wines, Lovedale’s claim to fame is the Lovedale Long Lunch hosted by seven boutique Lovedale wineries each paired with a local restaurant. Held annually on the third weekend of May and now in its 21st year, the popular wine and food event has evolved from attracting just a few hundred locals to around 20,000 passionate party-goers in 2013. 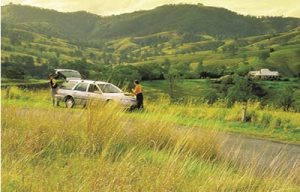 As you exit the Express Way, you find yourself at the top end of Lovedale Road, the ‘main road’ of the area, and along which larger wineries and restaurants are found. A few smaller roads like Wilderness Road and Talga Road run off it, so be sure to explore those too.

One of the first wineries you come to is Wandin Hunter Valley (off the top end of Wilderness Road). Owned by Russell and Katrina Leslie, it was founded by James Davern, director of the 1980s Seven Network soap A Country Practice, which was set in the fictitious country town Wandin Valley, after which the property was named. The Leslies also own several nearby properties and produce Wandin Valley, Tin Soldier, Saltire Wines and Warraroong Estate under the combined banner of Swish Wines.

At the cellar door you can enjoy a range of Wandin’s Reserve, Estate and Pavilion Ranges, made from estate grown fruit and grapes sourced from other regions. The estate also includes a fantastic cricket pitch and pavilion, villas and cottages, and the popular Wandin Hunter Valley Wine Bar & Diner.

A little further down Lovedale Road, Jan and Jorg Gartelmann, aged 70 and 73, have been working tirelessly on Gartelmann Wines since 1996 and don’t look like slowing down any time soon. In 1994, Jorg suffered a heart attack and was told to take it easy. But the then 55-year-old computer software producer instead bought a run-down vineyard and decided to try his hand at winemaking.

Their first vintage was released in 1998 and they now produce about 8500 cases a year. With the assistance of contract winemaker Liz Jackson of First Creek, their range of 17 wines includes the Jessica Verdelho, Benjamin Semillon, Diedrich Shiraz and the Wilhelm Shiraz.

“Liz is a wonderful teacher, and she explains what she tastes, but the final decision rests with Jorg, so she makes the kind of wine we like,” Jan says.

“I like my wines to have fine tannins, to be immediate drinking in style and have good balance, but still age well. I know if I get good fruit, Liz will make me the best possible wines,” Jorg adds.

Asking winemakers and vignerons to name their favourite wines is a bit like asking parents to choose a favourite child. “While I’m a ‘big red’ lover, I really love our Hunter Valley Benjamin Semillon, both young and old, and Jan is crazy about our Chardonnay.”

The Gartelmanns have won a swag of trophies and medals, mostly for their Semillon, and Jorg continues his dream to create the ultimate trophy-winning Shiraz, but he says the best thing about his job is serving appreciative wine enthusiasts at cellar door.

“We love challenges and trying to improve with each year. It’s delightful to see people’s happy faces when they try our wine at cellar door. We want to do this for many years yet.”

Opened last year, The Deck Café, owned by chef Matt Dillow and his wife Monika, is a wonderful addition to the Gartlemann experience. Situated by a lily-covered pond, it’s just the place for a hearty breakfast or a leisurely lunch.

The next stop along Lovedale Road is Adina Vineyard and Olive Grove. Owned by Peter O’Meara, it’s home to a number of attractions that co-exist on the property including Adina’s vineyard, cellar door, an olive grove and olive mill, five self-catering lodges, Reflections Day Spa, and Emerson’s Café & Restaurant operated by chef Emerson Rodriguez and his wife Samantha.

Originally from the IT world, Peter’s passion for wine developed as a young man, while working in South Australia.

“Years later I was living in France running a US multinational IT business. I decided to leave corporate life and do my own thing. I bought a vineyard in Lovedale because I loved the area and ten years later, I still do,” Peter explains. “As locals we work together and strive to produce outstanding small batch wines.”

While the additions to Adina are relatively new, vines have been grown on the property since the 1860s, and the modern vineyard was mostly planted in the 1980s. The vines produce Hunter favourites Semillon, Chardonnay and Shiraz, and Adina’s range also includes Cabernet Sauvignon, Cabernet Franc, Pinot Grigio and Sangiovese.

The property has 2000 olive trees from saplings to some around 20 years old that are usually harvested from April through to early June. The olives are prepared on site using traditional organic methods producing distinct flavoured table olives, tapenades, and beautifully fresh and vibrant olive oils. 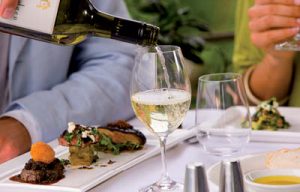 Across the road and nestled on 100 acres is another family-owned boutique winery, Tatler Wines, headed up by brothers Theo and Spiro Isakidis. They produce some great estate grown and made table and sparkling wines that you can taste at the cellar door or indulge in at the Tatler Tapas Café. With head chef Katy Carruthers on the pans, the café offers heart warming tapas inspired by her extensive world travels. If after that decadence you just can’t go any further, they also have on-site accommodation.

The property hosts the annual Hunter Valley Wine Country Polo tournament in the first two weeks of September) and if you’re over 35, and happen to be in the area in July, you’d be more than welcome for a run on the paddock at the Lovedale Golden Oldies Rugby match.

General Manager and chief winemaker at Allandale Wines, Bill Sneddon has spent quite a few seasons playing rugby for both Lovedale and Pokolbin. Having just celebrated his 31st vintage with Allandale, there’s not much about the area and Hunter Valley winemaking that he doesn’t know.

Also on Lovedale Road, and sitting on a hill overlooking Semillon and Chardonnay vineyards, Allandale Wines’ cellar door boasts a commanding 180º view of the beautiful Brokenback Mountains. The scenery is particularly lovely in the late afternoon as the sun sets and shadows move across the landscape.

With Bill in charge and assisted by Alex Woods, Mark Robinson and Bill’s son, Will, Allandale makes all of its wine on site from fruit off their own and selected vineyards from the Hunter Valley, Mudgee, Orange, Hilltops, Hastings Valley and McLaren Vale.

Allandale is probably best known for its Shiraz, Chardonnay and Semillon, and Bill says he might have some limited stock of the 2007 Hunter Valley Semillon left (trophy winner at the Hunter Valley Wine Show for Best Available Dry White) – aged Semillon lovers, that’s your cue.

“I’m also excited about our 2013 Hunter Valley Semillon,” Bill says. “The cool, dry winter set us up perfectly for complex and flavoursome styles with excellent acidity and tremendous cellaring potential.”

As music lovers, Bill and his wife Sally also host the annual Strings in the Winery. An enchanting black-tie affair, it’s usually held each August and offers a night of superb live classical music, fabulous wine, wonderful food, loads of great company and plenty of joviality.

Head out Allandale’s drive, turn left and just a minute later you’re at Capercaillie Wines. While Capercaillie is no longer owned by its founders, the late Alasdair Sutherland and his wife Trish, with the talent of vineyard manager Lance Mikisch and winemaker Peter Lane, it continues their tradition of producing unique boutique wines ranging from the premium Ghillie Shiraz to easy drinking Sparkling Moscato.

It really is very easy to spend a day or two in Lovedale. Fabulous restaurants, guesthouses, B&Bs and stylish self-contained cottages like Lillian’s On Lovedale are dotted around the area, or if resorts are more your style, there’s the Crowne Plaza Hunter Valley on Wine Country Drive.

If you tire of wine tasting, there’s plenty of local art to seek out at Emma’s Cottage Vineyard Gallery and Ogishi Craft Centre or enjoy a treatment at the Tea Tree Spa or Reflections Day Spa. For the more energetic, you can tee off for 18 holes at the Hunter Valley Golf & Country Club.

However you like to spend your day, you’ll love your time at Lovedale.