There’s a spanking stretch of recently constructed, designer freeway that has shaved at least 10 minutes off the trip between Melbourne and the Mornington Peninsula. It’s called the Peninsula Link and it’s a magnificent ribbon of incredibly smooth bitumen which, just as it threatens to instigate a doze, jolts you back to the here and now with a series of roadside sculptures that inspire both bewilderment and alarm.

One looks like the hypodermic paraphernalia of a circus clown with its multi-coloured needle-like spire and eye dropper bulb. Another; a massive, steel, ram’s skull has come to rest and rust on an embankment and, right where you climb the hill from which the Peninsula can be seen rolling forth into the distance, a silver limbed, metallic tree with swirling, shimmering flying saucer leaves, weaves with the breeze.

It’s at this point the astute observer will detect the dashboard temperature gauge keenly heading backwards.

The turnoff to Balnarring, less than an hour’s drive from the city, puts you at the gateway of this cool climate wine region and instantly the various meanings of cool are evident. It’s at least three degrees fresher than the big smoke, there’s a hint of sea spray in the air, and as the countryside folds into valleys and spurs, dams sparkle and vines blanket entire hillsides, you’ll notice just how truly beautiful it is.

I turn left into Tuerong Road. To the right, an enormous vineyard is stitched to the slope by its netting and there’s clearly something special going on beneath the canopy. This is the slope responsible for the 2012 Yabby Lake Block 1 Pinot Noir which, at the 2013 Royal Melbourne Wine Awards, became the first Pinot Noir in the Award’s 52-year history to win the Jimmy Watson Memorial Trophy.

Yabby Lake’s long driveway is shaded by a stately row of gums. The seemingly endless vineyard pushes all the way to the edge of the far off bushland. The cellar door and café sit high on the property, masters of their expansive domain. Not surprisingly, the chalk scribble on the blackboard above the brisk cellar door trade reads, Block 1 Pinot. Sold Out. I guess I’ll have to be content with a bottle of their excellent Red Claw Pinot Noir and a quick single-estate espresso before I head off towards Balnarring. 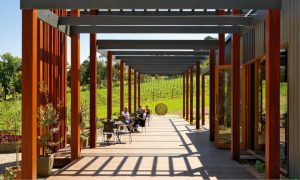 Something in the water

Horse studs and stone and timber mansions hide behind manicured hedges that have been clipped to a razor sharp edge. Some lucky enough to straddle a ridge or perch atop a verdant rise stare startled at heavenly views of Westernport Bay beyond which lies Phillip Island, the last stretch of protection between this neck of the woods and the gnashing teeth of Bass Strait.

Geraldine McFaul, winemaker at Willow Creek vineyard, grips her café latte as if it’s providing her with protection. She’s dwarfed by the muscularly elegant black steel beams of the Cellar Door. We lean against its bluestone bench, gazing through the windows at a vast valley of grape. I ask what makes the region so good for wine growing.

“It’s the water”, she says. Now, I’m no wine connoisseur, but this seems a little far fetched. Of all the possible variables that could enhance a bottle of plonk, I would’ve thought water was the least likely. She sees that I’m puzzled. “Sea water”, she explains. “It should be too cool here for grape growing but the sea moderates the climate. There’s no frost. Everything about the Mornington Peninsula is mild, which gives a vibrancy to the fruit. It’s aromatic and more delicate with an intensity of flavour.”

With its graceful groove of citrus and nuts and a long, delightful and slightly creamy hang on the tongue, the 2010 Willow Creek Chardonnay certainly reveals a delicate intensity.

Since the region has long been famous for its Chardonnay and Pinot Noir, I’m keen to discover what else is going on. Just around the corner is the Balnarring vineyard of one of the most respected and indeed, colourful winemakers of the region. Once you’ve managed to dodge the chooks, dogs and wandering children in the driveway of her Quealy Estate, there’s every chance you’ll find Kathleen Quealy in a pair of plumber’s overalls with missing knees tucked into strikingly mismatched gumboots and working a little magic with a variety she and husband, Kevin McCarthy, virtually pioneered in the area 25 years ago: Pinot Grigio.

The whiff of rock pool has drawn me closer to the coast where I find Le Bouchon restaurant, somewhat incongruously tucked behind the supermarket in Balnarring Village. This is where Paris has hit the Peninsula and the diners are smacking their lips.

If you want to get the feeling of dining among the vines, head back to Willow Creek’s excellent Salix restaurant, with its floor-to-ceiling windows bringing the vineyard onto the plate. Bernard and Rachael McCarthy use regional produce to create an adventurous seasonal menu. 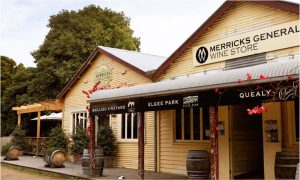 A store with more

A huge ocean swell sends bomboras mauling their way up Westernport Bay. The sun is out and on the slope beyond the Merricks General Wine Store, rows of vines appear to be doing a conga line shimmy in the feisty onshore gust.

The Wine Store serves as a combined cellar door for three local vineyards: Baillieu, Quealy and Elgee Park. Bails Myer of Elgee Park is regarded as the true pioneer of this wine region, having established his vineyard in Merricks North in 1972. For many, the Elgee Park Chardonnay has been the benchmark of the region. Two other pioneers of the Peninsula have their vineyards on Thompsons Lane, which climbs the rise behind the General Store. Brian Stonier of Stonier Wines and George Kefford of Merricks Estate both did their initial plantings in 1978 and a visit to their cellar doors will delight, particularly if you can pick up a Merricks Estate 03 Shiraz, a cool climate classic, or a Stonier’s Reserve Chardonnay with its melody of melon and creamy zest set to a backbeat of lingering spice. 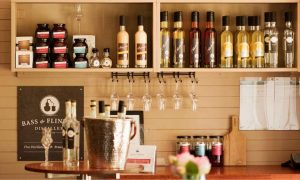 A quilt-like patchwork of vineyards hemmed by dusty roads, horse tracks and century-old cypress hedging entices you away from the bluster of the sea, past the always bustling Montalto vineyard and olive grove with its fabulous chef’s hat restaurant and magnificent grounds studded with sculptures, and up into Red Hill where the Mornington grape has been put to an entirely different use.

Bass and Flinders Distillery has been producing grape spirit using a traditional Alembic Pot Still since 2009. Their range may be handcrafted by a couple of self confessed ‘crazy old, white-haired guys’ named Bob and Wayne in a shed on Red Hill Road, but this is no hillbilly operation. In addition to Gin, Limoncello and Grappa, they’ve just released Australia’s first grape-spirit based vodka.

I follow the ridge line west from Red Hill past country cottages standing their ground among the weekend palaces of the plush, lush and flush. The bush gets a little thicker here, which explains why the entrance to Miceli Wines is easily missed. The Miceli winery is a steel shed, the offerings are scrawled on a blackboard resting on a chair and the winemaking philosophy is one of personal care, attention to detail and lashings of love. You can taste it, particularly in the 2009 Lucy’s Choice Pinot Noir with its elegant rhythm of cherry and soothing spice.

Up the road Fred Ursini is pouring his passion into the diverse range of Massoni wines, founded by Leon Massoni in 1984. Fred now oversees the operation which also sources fruit from a vineyard in the Pyrenees. There’s no cellar door (yet) but his Sav Blanc and Pinot still manages to sell out as does their famed Italian varietals.

Relax and soak it in

To the north, the land falls away dramatically allowing unrestrained vistas of Port Phillip Bay. Cargo ships slice westward, Bass Strait bound. The city skyline of Melbourne pierces the far horizon like a busted comb. It’s here that I find the other true pioneer of the region, Garry Crittenden of Crittenden Estate, who first planted five acres of vines in Dromana in one weekend back in 1982. In doing so he doubled the amount of vines on the Mornington Peninsula. With his wife Margaret, Garry also opened the first cellar door and winery café, built guest villas over their lake and was pivotal in helping establish the region as a tourism destination. When I ask him where he believes the region is headed, he tells a story.

“I planted Cabernet…came back after a weekend away and my son had chain-sawed the lot and replaced it with Pinot.” “No remorse either” adds his son Rollo, now the winemaker at Crittenden. “It’s young people with a sense of adventure that are the future,” says Garry.

Perhaps it’s precisely this sense of adventure that inspired them to plant the little known varieties, Txakoli and Savagnin, but, as Garry says, “It’s fun making Savagnin and Grigio and all these oddball varieties, but they’ll never challenge Chardonnay.”

The setting sun casts a dappled crimson glow across the Crittenden Estate lake. A duck rattles the silence with a clunky belly landing. The 2012 Kangerong Chardonnay, sourced solely from vines planted on the Estate in 1982, settles in the glass. The deck of the Lakeside Villa reaches over the water giving a feeling of being afloat upon the glorious peace and as the Chardonnay hovers on the tongue, applying a smooth breeze of melons and apricots, it’s hard to believe there’s anywhere on the planet that comes close to the Mornington Peninsula.

How to make new friends after a move