PORTRAIT OF THE LEGEND AS A YOUNG SURFER 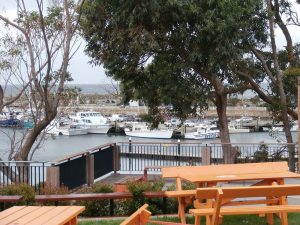 JOHN McNAMEE RIDES A WAVE OF NOSTALGIA ON THE NSW SOUTHCOAST

IT was the muscular blond figure standing in front of a “quiver” of enormously long surf boards that first caught the eye.

The photo was a ghostly, grainy old print that had been reproduced thousands of times…but its shadowy aura, and especially the infectious grin on the face of the bare-chested, remarkably handsome young man, drew you closer into its spell.

Some of the boards appeared to be as long as 16 foot or nearly five metres and would have weighed up to 200 pounds or more than 90 kilos.

That’s a lot of stick.

But then this was no ordinary board rider. This man was, along with the fabled Duke Kananamoku, one of the pioneers of surfing in both California and the Hawaiian islands.

We discovered the iconic picture in the back of a highly scented curio shop chock-a-block full of vintage collectibles and priceless “junk”, in the main street of the historic township of Milton, on the NSW south coast. Nelson Eddy and Jeanette McDonald were warbling away in the background.

What drew us into Nikki B’s quaint world of memorabilia in the first place was an old framed poster of The Duke himself hanging in the front doorway.

Now we’ve always had a strong fondness and connection with the Duke because at Freshwater beach, on Sydney’s northern beaches, in 1915, the Duke gave what has been described as  ”an amazing exhibition of wave riding with a solid surfboard modelled on the very type used by him in his native Hawaii.”

The report continues: “Over a period of time while he stayed at the (so-called) Boomerang Camp at Freshwater, the Duke fashioned a solid board from the local timbers, and it was with this board that he first introduced to the Australian Surfing community the ancient craft of Hawaiian kings – the art of surfboard riding. “

As we drifted on through the shop we came across the picture of the man with the massive boards. It was titled “TomBlakeWaikikiBeach, 1929.”

After some gentle (unsuccessful) haggling with the polite shop lady, the famous print of this legend of the surf, was neatly wrapped in brown paper and snugged down in the back of the car.

Like the Duke, Tom Blake was a famous waterman and is credited with inventing the hollow surf board which revolutionized big wave riding in the Hawaiian islands. According to one biographical report: “Outside Duke Kananamoku, described as the Father of Modern Surfing, no other single individual had more impact on surf riding in the first half of the 20th century that did Thomas Edward Blake, born in Milwaukee, Wisconsin,  on March 8 1902 but who later spent most of his adult life in Hawaii.”

Not only did Blake invent the hollow surf board, using cross-rib techniques similar to the design of aeroplane wings but also a waterproof camera casing and in 1935, the surfboard fin, originally known as a “skeg” or keel.

Throughout his long life (he died in 1994 aged 92), Blake competed in and won hundreds of major surfing, ocean swim and paddle-boarding competitions and helped establish the surfing industry throughout the world.

It was just as well I could delve into this fascinating surf history because we had driven to the picturesque south coast beach of Mollymook to get away from the city for a while and get in some serious surfing. Wrong.

The famous Mollymook swell had died to a wimpish shore-break that didn’t scare the seagulls.

Even round the corner at the more isolated spot of Narrawallee, occasionally good for a gentle break popular with the long-boarders, there was nothing to fire up the surfer’s soul.

The only break that was attracting the serious dudes was around the southern headland at the Golf Club Reef or Coller Beach and to be fair it was looming up to five-six foot.

The only trouble at this location is, that like some of the Margaret River breaks, here you have to negotiate about a hundred metre walk across jagged flat rock to get into the water before you even begin paddling.

I draw the line at that. I’m a competitive beach sprinter, I’ve got to look after the tootsies and besides, there are plenty of the delights to Mollymook, nearby Ulladulla and the already mentioned historic Milton.

We stayed at the delightful Breakers apartments just up from Mollymook beach (mine hosts Brian and Anna Russell) and every morning from our unit balcony we had breakfast watching the humpback whales, including playful  calves, dawdle and fin-flap their lazy migration down the coast.

Every morning, as the aquamarine ocean heaved its gentle, rolling swell along the golden beach, we swam out to the southern reef and watched as pods of bottlenose dolphins cavorted and grazed  about 50 metres off shore.

You can join the local surf club stalwarts after their daily- at-dawn across- the-bay-swim at the MollymookBeach café for a healthy (or hearty whichever you prefer) and start the day with a delicious coffee.

If you are a mad keen golfer the nine-hole beach course must be one of the most picturesque in Australia or there’s the more serious Hilltop course, 18 holes of bushland beauty in the main township area.

Sadly, my interest in golf is confined to what’s on the menu at the popular Mollymook Golf Club bistro where they serve wonderful big meals such as lamb shanks and steaks with affordable wines and a popular family atmosphere. (If your family tolerance can be strained, don’t go on Thursdays as that’s Kids Eat Free night!)

More famously, there’s Rick Stein’s Bannister’s restaurant, situated right on the spectacular northern headland, and obviously offering far more exotic fare than at the Golfy, but certainly worth a visit on a special occasion.

The weather turned a bit chilly while we were there so we drove the short distance to the nearby fishing port of Ulladulla, bought some woolies at Target, wandered among the moored trawlers from the local fleet and adjourned to the popular Boardwalk Café on the Princes Highway, for a sensational coffee overlooking the harbour and away from the biting winds. Ulladulla’s had a major landscape facelift over the past few years and there are many new arcades and promenade areas around the small inner harbour where you can spend a pleasant hour or so or get in some holiday shopping.

But it’s the long, green rolling countryside around Milton, just a few kilometers out of Mollymook and also on the highway, where the robust-looking cattle graze among the spectacular pastures, that quite take your breath away.

Apart from its memorabilia possibilities, Milton has a cultural village courtyard and a history walk that takes about one and a half hours and covers around three kilometers.

There are also majestic views of Pigeon House mountain (named by Captain Cook in 1770) and the BundawangNational Park. Other heritage sites include the Town Hall, Library and Courthouse.

All in all, even if the surfing’s a dud, and the golf a no-goer, this part of the coast is ideal for a gentle, get-away-from-it-all break. If you’re driving from Sydney, allow extra time for the roughly 3-hour journey due to extensive roadworks around Berry and Nowra.

The precious long board of mine may not have got wet during our brief sojourn, but at least I feel I’ve found a fellow surf soul in the legendary Tom Blake, whose image, now adorns the hallway “family gallery” at home.

SCENIC VIEW: The Ulladulla fishing fleet seen from the colourful tables of the popular Boardwalk Cafe where the coffee is superb and the snacks tempting.

Why i’ts a tradie’s world out there!

Skin needs to breathe too