What Surfers Can Teach Us About Living Well

Surfers seem to have something the rest of the world does not. After all, their hair seems to hang a little looser and their smiles seem to stretch a little wider. Maybe it’s all that time spent in the ocean or the heavy doses of vitamin D, but we think surfers — as a whole — might have this whole bliss thing figured out. Here are six reasons why:

They know how to live in the moment.
The ocean is unpredictable. It can cradle you one moment, and turn ruthlessly violent the next. Surfers constantly read and adapt to these changes, whether it’s to catch an exhilarating wave or to be safe during a surprise wipeout.

And as professional surfer Keala Kennelly once described, riding waves also lends itself to a zen-like state. “Nothing remains except extreme focus for the task at hand,” she told Surfer magazine. “When I get way out the back [of the wave] and am looking in at those mountains, I feel my heart expand from all the beauty.” 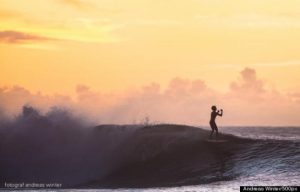 They use fear to their advantage and learn to be humble because of it.
Whether it’s your first lesson or you’ve won a world championship, surfers of all skill levels wipe out and face the ocean’s fury again and again. Surfing is a continuous struggle with a powerful and unpredictable force of nature and the ocean knows how to keep your ego in check.
It’s what makes surfing exciting, but it also keeps surfers humble, allowing them tounderstand their limits and listen to their fear. When Bethany Hamilton lost her arm from a shark bite when she was 14 years old, she waited only three weeks before getting back into the water.

“My love for surfing helped me overcome my fear of sharks,” she told The New York Times. “I feel really blessed that I was able to heal well after that experience.” Persistence also helped her to recover. “There’s always struggle days,” she told Surfline TV, “but I’m stoked I didn’t give up.” 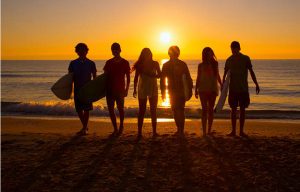 They make time to do what they love.
Most surfers make getting in the water a part of their everyday routine, even if it means getting up before sunrise or taking the coastal route home after work just to catch a wave or two. Surfing, after all, isn’t just a sport or regular exercise regime. It’s a lifestyle.

There’s a saying in the surf community: “A bad day of surfing is still better than a good day at work.” That’s because surfers are chasing the feeling that riding a wave gives them. Plus, it doesn’t hurt that surfing burns 100 calories every 30 minutes, the stunning views reduce stress , and the playing field (the ocean) keeps you in a state of awe. 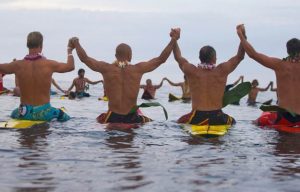 They value camaraderie.
While surfing seems like a solitary endeavor, an unspoken camaraderie exists in the lineup, especially when the waves are big and conditions are dangerous. The highly prestigious Quiksilver in Memory of Eddie Aikau surf competition best illustrates this spirit. Named after a legendary and heroic Hawaiian waterman who sacrificed his life to save others, the “Eddie,” as it’s known, only takes place when the waves are big enough, and competitors are voted in by their peers based on their values, not just their skills.

“It’s a tremendous honor to win the Eddie Aikau,” said Clyde Aikau, Eddie’s brother. “But I think what is even more monumental is that feeling of being together, to enter the water, to ride the biggest waves in the world, and to know that if something goes wrong, your partner in the heat is going to be there to help you out, because that’s what Eddie is all about.” 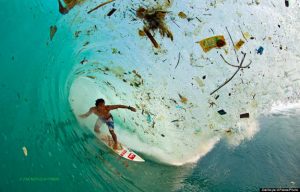 They protect what they love
It’s no coincidence that many surfers consider themselves environmentalists. They spend most of their time in or near the ocean so they see firsthand humans’ impact on Earth.

Many pro surfers have used their fame to help clean up the waters. And the Surfrider Foundation, which was founded by three surfers from Malibu, has racked up a long list of environmental wins, including saving 930 acres of wetlands in California and helping the Hawaiian island of Oahu ban smoking on beaches.

They are resilient.
Surfers know a thing or two about falling and getting up again. It’s part of surfing’s satisfaction. When Maya Gabeira almost drowned surfing at Nazare in Portugal, she used the near-death experience to get better at the sport, telling Surfline, “There’s so much we can learn from this experience. That’s my priority now. Because there’s no way I’m [going to] stop riding big waves.”

There are many ways to describe a surfer’s staunch dedication to getting back up. Danny Ritz, a writer for surf website The Inertia, thinks it taps into something primal, while some surfers have likened it to a religion. Whether it’s spirituality or instinct that drives a surfer’s determination, one thing is for sure: Surfers can fall nine times in a row, but you better believe they’ll be back up on number 10.

The Story of Tweed

You must be yolking! Nation cracks up over funniest egg joke