You must be yolking! Nation cracks up over funniest egg joke

To celebrate World Egg Day, Australian Eggs has been on a nationwide search to uncover the most egg-ceptionally side-splitting gag. Pun intended.

The hunt began on the Australian Eggs Facebook page where fans were asked to submit their favourite egg joke, whether it was an original or an oldie but a googie.

Joke eggs-pert, Jimmy James Eaton was then tasked with sifting through hundreds of nominations to decide on the dozen best jokes.

Taking to the streets of Sydney, Jimmy James tested the shortlisted jokes on unsuspecting members of the public to gauge eggs-actly how funny they are. Watch what happened at facebook.com/AustralianEggs/video.

Based on the public’s reactions, a shortlist of jokes was identified for egg fans to have the final say on Australia’s funniest egg joke. After hundreds of votes the one that had the nation cracking up was…

Q: Why can’t you tease egg whites?
A: They can’t take a Yolk!

2. What part did the egg play in the movie?
He played an egg-stra.

3. Why do the French make omelettes using only one egg?
Because one egg is ‘un oeuf’.

4. What happens if you mix a computer manual with a cookbook?
You get an egg-shell spreadsheet.

5. Where do you find information about eggs?
A hen-cyclopaedia!

6. What do chickens boogie down to?
R-egg-ae. 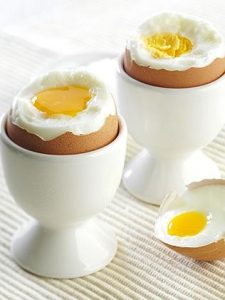 About World Egg Day
World Egg Day takes place annually on the second Friday in October and is a fantastic opportunity to get cracking and enjoy your favourite egg dish. Since 1996 events have been held around the world to celebrate the humble yet versatile egg and the vital role it plays in people’s diets globally. Visit www.eggs.org.au for some inspiring and nutritious egg recipe ideas to mark the occasion.

About Jimmy James Eaton
Jimmy James is the new face (or should we say “head”) of Australian Eggs’ new Unbeatable campaign. Jimmy is one of the funniest men in Australia, a real “comedi-hen”, loves eggs and will go to any length to prove it.

What Surfers Can Teach Us About Living Well