10 Strangest buildings in the world 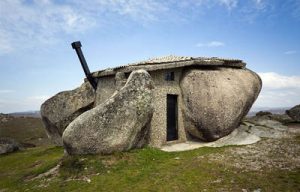 1. Stone House, Portugal
The stone house in Portugal really resembles the famous home of the Flintstones. It is built between two rocks and its architecture has impressed some of the greatest names of the branch. Not speaking that becoming so famous, the house was attacked by some vandals and in sequence of the attacks it was equipped with bullet resistant windows and a steel door. The house is pretty comfortable inside, having a fireplace and everything necessary, so it is a wonderful example of modern architecture in Stone Age style! Unbelievable! 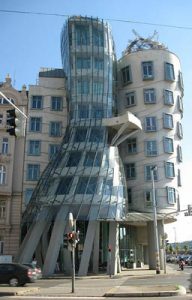 2. Dancing Building, Czech Republic
The Dancing House or “Fred and Ginger” is situated in Prague, Czech Republic. This is an amazing masterpiece of architecture, which has its own romantic charm. There is something so sweet in the way the buildings hug each other for a dance! It was designed by Vlado Milunic in cooperation with Frank Gehry, it is a stylish and amazing building, which became a symbol of the city! 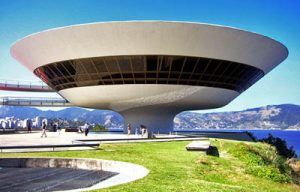 3. The Niteroi Contemporary Art Museum, Brazil
The Niteroi Contemporary Art Museum is significant building for the city; it looks pretty much like coming from another world, or from the outer space! It was built in 1996, designed by Oscar Niemey, who created it with the help of Bruno Contarini. The building is 16 meters high and the diameter of its cupola is 50 meters! The amazing building is gathering admiration from all – architects and ordinary people, who like the uncommon and original! 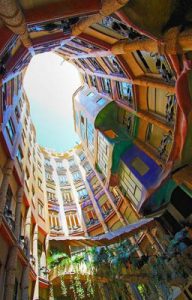 4. La Pedrera, Spain
La Pedrera or known also as Casa Mila is in Barcelona, Spain. The story of the house is pretty interesting – it was designed by Antoni Gaudí and built for a married couple. It is an extraordinary but stylish building considered to be highly unconventional – there is not even one straight line! Visitors can go to the top floor, the attic and roof and have a close look at this masterpiece!

5. The Crooked House, Poland
The crooked house in Sopot, Poland has an extraordinary and amazing structure. It was built in 2003 with design based on the pictures of Jan Marcin Szancer and Per Dahlberg. It looks as taken from a cartoon movie, its design is “crooked”, but a kind of symmetrically, so it is not ugly at all, just strange! The interesting part is how builders managed to create this genius idea, but the house is a fact and everyone admires their creativity! 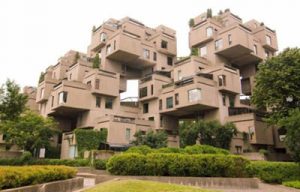 6. Habitat 67, Montreal, Canada
Habitat 67 in Canada is a complex which resembles a very interesting arrangement of cubes that kids play with. It is pretty interesting how it was designed – it looks so original and the same time is a building completely stable and comfortable for living! The architect Moshe Safdie created it as a main attraction for Expo 67, when it was officially exposed! 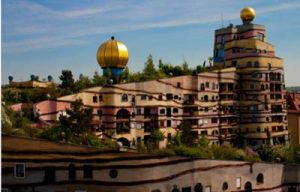 7. Forest Spiral – Hundertwasser Building, Germany
This Forest Spiral was completed in 2000 and it is a really amazing building with a green roof, resembling a spiral! The colours, the movement of the spiral the whole design is very stylish and warm, makes the whole building look nice and cozy, a real place to live in! The designer Friedensreich Hundertwasser, is an artist, which explains why it looks like a masterpiece, and his design was perfectly executed by the architect Heinz Springmann, in two words – they did a great job! 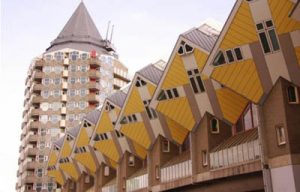 8. Cubic Houses, Rotterdam, Netherlands
The Cubic houses in Rotterdam and Helmond, Netherlands were designed by Piet Blom. They are cubes, situated in different angles over hexagon formed pylons, so they resemble trees, and altogether – make a forest! There are 38 small cubes, and they all are attached one to another, this is a genius idea, which was perfectly completed! 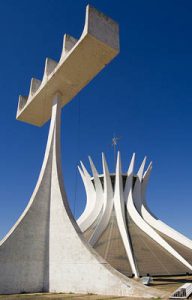 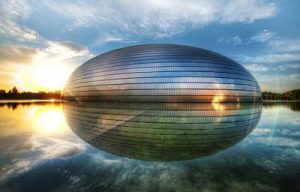 10. National Centre for the Performing Arts, China
The National Centre for the Performing Arts, NCPA shortly, unlike the newest buildings in China took almost 6 years to be built – it was started in 2001 with the project of Paul Andreu and it was finished in 2007. But all the time it had been built was worth, considering the result – the building resembles an enormous egg, lying in an artificial lake, it is all made of titanium and glass and looks really amazing!

Top 10 Strangest Buildings in the World