Look sorry everyone, but this column has absolutely nothing to do with women of religious orders in any state of dress or undress being involved in orgiastic rituals.

It’s more of an experiment. You see, Go55’s online editor tells me that most of the “hits” on our new-look website have involved stories on the “10 most amazing staircases” and a recipe for kale and quinoa patties. Whatever they are.

It’s the same with newspapers, when you want someone to latch on to your article, or in this case visit your website, it’s all about the headlines which initially grab the attention.

Last week you remember I wrote a column here which carried the headline : “Plunging into despair over a glimpse of cleavage”.

Now I thought that would drag in the punters.

Well it did but so far nothing like the pulling power of those quinoa patties which are obviously more potent that we thought.

So where was I? Oh yes, speculating on the grabbing power of a wildly salacious headline. Websites and blogs are full of them these days, ever noticed?

So I say sorry again for trying to lure you into breaking away from the quinoa patties for more exotic fare.

That’s twice now I’ve said sorry. And I make no apology for that!

You see this column was originally going to be about how so many people these days don’t bother with that simple word “sorry” in our day-to-day dealings with our fellow man. It seems to be a generational thing.

Only the other day I was walking back from the newspaper shop after my early morning dip in the surf when I sensed something coming up behind me.

I looked around and right there almost crashing into me was a young lady, no helmet, on a bike cycling up the footpath.

I veered to the side to let her go past and I muttered: “Oh, sorry.”

“That’s alright,” she snarled and flounced off in a whirr of pedals.

Whoa! Whoa! I said to myself.

That’s not a “That’s alright” response to that situation.

That’s a definite case of the double sorry..one from me and one from her. That’s what civilization is all about or as Seinfeld’s George Costanza would say: “We live in a community here!!”

As I see it, she was in the wrong for cycling on the footpath in the first place, but that would have been OK if only she’d met me halfway with the “sorry” word.

A chillingly similar scenario with identical outcome occurred recently when I hastily “sorried” and swivelled out of the way of a foisty young mum charging down the cereal aisle at Woolies pushing a baby stroller.

What’s wrong with these people?

Now that it’s Wimbledon time again, I’m reminded of that great Aussie tennis champion Pat Rafter. He knew when the sorry word was called for. 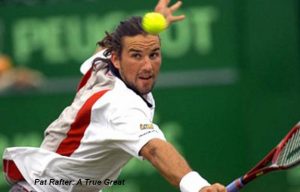 Right throughout his career, even in the heat of Grand Slam finals battles, he always made a point of saying to his opponent “sorry mate” when he fluffed his ball toss and had to wind up his serve all over again. It didn’t take much but it showed what a true gentleman Rafter always was on the court.

Sadly, you won’t see much of that happening on the glorious hallowed grass of the All England club these days will you?

Simple Ways to Declutter Your Mind

10 Strangest buildings in the world