EAGLE-EYED EDDIE’S ON COURSE FOR A LIFESAVING EXPERIENCE! 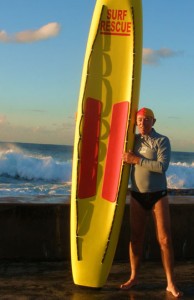 For the past few decades, veteran pro Eddie Emerson has become a legend around Australia’s golf courses… and now he’s set to create history in a totally different field.

After rubbing shoulders over the years with some of the biggest names in world golf, and tramping across some of Australia’s top courses, Eddie’s about to make a splash as a surf lifesaver.

Where once he’d be keeing an eagle-eye out for birdies and bunkers, now he’ll be more concerned with rescue boards, oxy-vivas and defibrilators.

At the grand old age of 71, Eddie has just completed his Bronze Medallion and will take up duties as a senior active surf lifesaver at the Clovelly club in Sydney’s eastern suburbs. There’s no age limit as such on people doing the Bronze, you just have to be over 15 but it’s rare for someone in Eddie’s age bracket to give it a whirl due to the demanding physical requirements of surf rescue techniques and long patrol hours. That’s why’s Eddie’s achievement is so remarkable.

Already a Life Member of the Australian PGA, a Life Playing Member and former Head Club Professional at Sydney’s famous St Michael’s GC , and one of the founder members of the Country Junior Golf Western NSW program, Eddie’s life will now take a fairly dramatic turn.

When most ageing golfers are happy just to potter around the course gently trying to improve their handicap or pass the time before adjourning for lunch at the 19th Hole, in summer Eddie’s going to be flat out down the beach helping the local surf lifesavers attend to the multiple First Aid cases, give oxygen therapy to distressed swimmers, carry out risky board rescues and possibly even be involved in a major resuscitation.

“I just wanted to volunteer and give something back to the Clovelly surf club of which I have been an associate member for several decades,” Eddie told Go55s.

“My mates think I’m mad, why bother doing it they said, and even my wife Nancye didn’t quite know what I was doing until she was watching Bondi Rescue one night and I explained that they were the professionals and I had just become one of the volunteers.

“She was very excited…she thought I was going to get paid like the Bondi lifeguards!”

Eddie has certainly created history at his local club…there are several sexuagenarians still patrolling the Clovelly “beat” which not only covers the bay area but out to Gordon’s Bay and its offshore “bombie” and north to Shark Point, but Eddie’s the oldest person ever to achieve his bronze medallion.

This will make him among the oldest active surf lifesavers in NSW when he pulls on the iconic quartered red and yellow cap at the start of this coming summer season.

It wasn’t all easygoing for the still exceptionally fit golf pro. It’s only in recent years that he stopped running in the City to Surf but he had to find a whole new level of fitness.

To qualify for the rest of the exam, Bronze candidates have to first complete a gruelling 200mx200mx200m compulsory run-swim-run in eight minutes. Eddie’s turn came at a fairly gnarly Maroubra beach at the beginning of May.

“I made it with just 15 seconds to spare,” Eddie laughs.

But the drama didn’t end there. As part of the practical course, candidates also have to complete an offshore board rescue by paddling out to an “unconscious patient” as quickly as possible and bringing them safely back to shore.

Even though he was Bondi born and bred, Eddie had never been on any sort of surf craft. From the age of 15, he was too busy running around golf courses caddying for the top Aussie golfers.

So it was quite a challenge when it came to the crunch and he had to demonstrate his paddling skills.

“I first made the mistake of trying to get out across the sandbank instead of taking the fairly strong rip out to sea. Unfortunately by the time I got off the sandbank I was trying to paddle across the rip and it was hard-going.

“When I eventually got out to the young girl who was my patient, she told me she was too tired to try to get up on the board.

“So I said to her, “I’m not going back without you love so hang on”. I got her on the rescue board and managed to pick up quite a good wave all the time remembering my instructions were to keep the nose of the board up out of the water or we’d cartwheel across the surf zone on to the beach.

“Well, it was a bit of a struggle but we made it back safely and securely without any damage but I’m sure going to be getting some more board practice from now on,” Eddie said.

But Eddie’s used to big challenges. He was already an assistant pro at Royal Sydney and played the Australian tour when he was still in his teens and he remembers his father, also a golf pro, helping to caddy for such giants of the game as Kel Nagle who went on to win the centenary British Open in 1960 at St Andrews.

From 1974 to 1978 Eddie was invited over to Fiji to help set up the local golf academy and he became a personal friend of the then Prime Minister Ratu Sir Kamisi Mara who was a golf fanatic.

“I suppose the most important thing that happened to me over there was that I met and married my wife Nancye and to this day she still puts up with me. It’s a long time to be a golf widow,” Eddie laughs.

But Eddie’s major pride and joy is the Country Junior Golf program in which kids, mainly indigenous, from such outlying western NSW areas as Warren, Cobar, Burke, Nyngan, Mudgee, Forbes. Coonamble, you name it, are brought to Sydney for special coaching clinics.

The program is supported by the Jack Newton Junior Golf Foundation and the kids are ferried to Sydney in a specially-donated bus every January and billeted in local clubs.

“Many of them are naturals and from just bush kids hitting pebbles around with tree branches out in the scrub, this is a whole new experience.

“We’ve already had one young lad, Matt Egan from Cobar who was a runner-up in the Combined Schools championships who hit a 69 off the stick at West Pennant Hills on his first ever outing there.

“Some of the kids we’ve put up in the hall at the Clovelly surf club over the years and many hadn’t even smelt the sea air let along see or swim in the ocean” Eddie laughs.

Eddie explained that the program needs about $20,000 to run the Bush to City program in the January school holidays and they’re always looking for sponsors.

“Thanks to the program and to a former colleague of mine, Sharon Nott from Dunedoo who’s put years of work into the scheme, junior golf is now pretty strong in the central west.

“But to keep running the program we need more sponsors. I used to run fund-raising days at St Michael’s which also raised money for the Prince of Wales Children’s Hospital.

“It’d be a shame if we weren’t able to continue the program but we’ve had some terrific support over the years from many sources.”

*For more information and to help support the program, go to www.countryjuniorgolf.com.au or  email Eddie at eddie.emerson@bigpond.com