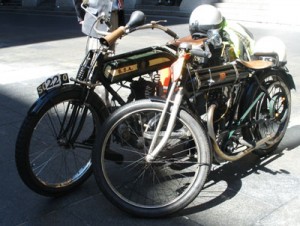 HEAVY rain was pelting down as the scattering of veteran rally drivers motored along the Great Eastern Highway into Kalgoorlie.

The lovingly restored “magnificent” machines were only a few days into the three-week odyssey which would see them recreate the historic 1912 trans-continental crossing from Perth to Sydney.

That 28-day navigation of the formidable Nullarbor Plain by Fred Birtles, Sid Ferguson and Rex the dog in a 1912 Brush automobile overcame almost impossible odds to create history as the first west-east motor crossing of Australia.

The centenary journey honouring this event, which attracted more than 40 veteran rally enthusiasts including many in original vehicles, and which covered more than 4000 kilometres, left Government House in Perth on March 16 this year and was due to arrive in Martin Place Sydney on April 4.

But that deadline was far from the mind of vintage motorcyclists Katrin Bohner, 42, and her husband Dieter  Eckel, 51, from Ingolstadt, in Bavaria, Germany.

“It was hard to see through our goggles as we rode through the pouring rain on that day not too far out from Kalgoorlie,” Katrin told Go55s.

“There were many enormous roadtrains speeding along the highway and throwing up a lot of water as they went past. It was pretty dark and pretty scary,” she said.

Katrin was in front on her beloved 250cc 1909 OHV JAP motorcycle as the riders and spectacularly-helmeted car drivers nursed their trundling machines along the teeming highway.

Suddenly, thundering towards her, headlights blazing and airhorn sounding, Katrin could see a roadtrain approaching rapidly and she began to automatically edge towards the verge.

Alarmingly, just then, appearing from behind the massive loom of the truck, Katrin saw a car pull out and head straight towards her throwing masses of water up from its speeding wheels.

Seeing what was happening, the roadtrain driver continued to sound his airhorn frantically trying to warn the motorist of the approaching and temporarily blinded motorcyclist.

“It looked like he hadn’t seen me. He kept coming straight towards me and I thought he was going to run me down,” Katrin said. “I had to swerve towards the side of the road and came off the bike.

“Luckily at the last moment he managed to make me out in the darkness and he veered off  along the edge still travelling at great speed… even though he could see I’d come off my bike, he just kept on going.

“It was very close to disaster but I’m pleased to say that was the only dangerous thing that happened during the whole rally,” Katrin said.

“The other worst bit was hitting the traffic on the outskirts of Sydney on the last day of the trip,” Katrin laughed.

Husband Dieter who was riding a 1914 Model H, 3-speed, 557cc BSA which he lovingly restored himself, only had minor problems too on the century-old motorbikes.

“That also happened just outside Kalgoorlie in that rain storm…the main bearings on my bike boiled but luckily I was able to replace them from what I had in my bags,” Dieter said.

It’s obvious very little fazes the adventurous duo who have completed some of the most dangerous motorised treks around the world.

In 2010 they took part in the legendary Cannonball Run, crossing continental USA from east to west, a total distance of 5500km in 16 days and involving 45 riders on pre-1916 motorbikes.

“Sometimes we had to do 400 to 500kms a day on that run which was pretty tiring so we were pleased to know that we only had to do about 250 kilometres a day on the run across the Nullarbor,” Dieter said.

Last year, they joined 12 other riders on a four-day event, a 700m trek through West Germany, France and Luxembourg and in 2009 they took part in the Deutschlandfahrt, involving 17 riders on pre-1915 bikes crossing Germany from north to south, 1250km in eight days and another 250km-a-day to get home.

Another of their favourite treks is the Irish National Rally, a five-day event involving an 800-1000kms ride on the scenic and mountainous roads of south-west Ireland.

“We have done the Irish rally many times but before 2008 we did it the easy way, with modern bikes from the 1930s,” Katrin explains.

“So all in all we were looking forward to this nice leisurely ride across Australia getting a gentle view of the continent but maybe we should have thought about bringing an Amphi-car instead of our bikes,” she laughs.

This is a reference to the fact that it wasn’t only the torrential rains along the highway into Kalgoorlie that beset the riders… they also had to manoeuvre flash flooding in the Wilcannia and Broken Hill areas as they meandered down through central NSW.

“We thought the countryside looked beautiful, and very green in parts which we didn’t expect to see  riding across what is basically a desert,” Dieter said.

“And the amazing thing was that everywhere we stopped along the way, people showed great interest in our bikes and so many of them had a pretty good knowledge of some of the makes.

“It was different as we drove across the US, not so many people there knew much about vintage bikes,” he said.

We ask if they saw many kangaroos along the way.

“Do you know,” answers Katrin.”We saw hundreds of kangaroos but they were all dead lying by the roadside. We did not see one live kangaroo!”

Arriving in Sydney, the 37 enthusiasts who completed the epic journey are all milling around Martin Place in lunchtime Sydney answering questions from everyone including NSW State Governor, Professor Marie Bashir, hordes of curious city office workers, and amazingly, 89-year-old Irma Le Brocque who is the daughter of 1912 pioneer Sid Ferguson.

Looking at the crude upholstery and absence of springs in the two vintage bikes, I’ve got a question of my own for the two intrepid adventurers.

“It must be pretty hard on the bodies travelling all those distances on those basic bikeseats, why don’t you do it in style and ride some of these luxury modern bikes” I ask Dieter naively.

“To us, a modern bike is anything after 1930, and we wouldn’t have half as much fun if we were not riding these bikes,” Dieter says firmly.

Dieter confesses he has always been interested in old British motorcycles as his father owned several Nortons.

By the age of 14 he was already riding an NSU Quickly and 250cc Maico and two years later had restored his first BSA, a 1932 Blue Star which is still in use.

“I was going to ride  a 1913 BSA on this run but the forks I broke on the Cannonball Run were not repaired in time so that’s why I’ve got the 1914 model here,” Dieter says.

Katrin’s first bike was a Velocette KTS Mk 1 from 1935 but they both admit they prefer the bikes of the pre-1913 era.

“My favourite is this 250cc JAP which Dieter found on an autojumble site. There’s no known history of it but it was once on display in the Stamford Hill motorcycle museum in the UK, and I’m still in love with it particularly after the way it performed on this trip,” Katrin says.

So what’s their next challenge?

“We don’t know yet,” admits Dieter. “Unfortunately all this travel we do to get to rallies gets very expensive and I guess we’ll have to go back home and earn some more money before we decide about our next adventure.”

“Well next time you come to Australia, “I tell them, “I’ll make sure you get to see some real live kangaroos!!!”

SPEED MACHINES; The two vintage motorbikes ridden by Dieter Eckel and Katrin Bohner on the historic road rally across the Nullarbor

EAGLE-EYED EDDIE’S ON COURSE FOR A LIFESAVING EXPERIENCE!