How Custer The Kooka Made His Fateful Stand! 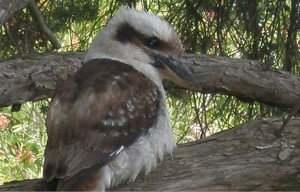 A Twitchy John McNamee Witnesses a Battle Royal Among The Snowgums

I’ve never trusted bird watchers, or twitchers as they are so aptly named.

No wonder they’re always twitching…cooped up there  in damp and drafty “hides”, squinting for hours into those giant binoculars, endlessly peering and prying into the private lives of our wonderful aviculture.

I distrusted them even more about 30 years ago when I was working in Pommyland and happened to become captain of the C XV rugby team at leafy Woodford in Epping Forest, Essex.

It was a crucial part of an away  game at a beautiful countryside  pitch in rural Kent, we were leading by just a few points when their blindside breakaway burst out of a maul and sprinted to the line.

There was only my fullback, Nigel Fotherington-Entwhistle (or some such double barrelled name I can’t accurately recall)  in cover defence as their flanker speared towards the posts.

“Grab him Nige”, I screamed from the mudpile at the bottom of the disintegrating ruck … but Nige was not with us, he was daydreaming yards away with his back almost turned away from the ensuing drama.

By the time he regathered his wits, the triumphant wing forward had galloped under our posts without a hand on him as they say and planted the match winning try.

I was livid as we had them done and dusted for 79 minutes and they would have been a prize scalp for us.

I confronted Nige in the changing room afterwards where we were all slumped, muddied, bloodied and bowed after an epic struggle.

“What the bloody hell happened to you, you blithering idiot?’ I asked, quaffing a giant jug of Worthington E shandy kindly left out for us by the host club.

He recoiled. These English public school boys weren’t used to being spoken to like that.

“Sorry, Skip,” he blathered,” but I’d just spotted a yellow tailed male marsh snipe in the creek over there. They’re awfully rare, you know. I can’t wait to tell the other chaps in the Totteringham Twitchers’ Club…”

Understandably I’ve had a deep-rooted mistrust of Nigel and his twitching breed ever since.

But it wasn’t until I was sitting on my deck doing the Omega crossword recently when I became unwittingly enmeshed in my own ornithological episode.

I’m used to the manic lorikeets and the proprietorial wattle birds darting backwards and forwards across my garden like a scene from the Battle of Britain all trying to get the first nectar buds on our abundant grevilleas and making a God-awful racket about the whole thing.

But the other day there was a more ominous avian adventure taking place…and call it the memory of Nigel  Fotherington-Entwhistle if you like, but I am now struck down with the dreaded Twitchers Revenge.

It was all quiet up there on my elevated deck, just a gentle zephyr of a nor-easterly wafting through the gums when there was a frantic flurry of wings, a deep throated chortle not dissimiliar to that which might be heard coming from Dracula’s crypt during Virgins’ Visiting Day, and there on the branch before my eyes stood a majestic kookaburra, looking resplendent in his ruffled plumage and noble profile.

In his beak was a long-eared, long-tailed rodent of some sort, wriggling and contorting and gasping horribly.

I shuddered..I’m not used to seeing wildlife in all its bloody tooth and claw up on my deck…but I watched with a deadly fascination.

Suddenly, like avenging MiGs screaming down from out of the sun, three monstrous currawongs, yellow eyes blaring in their skulls, long black beaks menacing, swooped in squadron formation at the kooka and tried to snatch away its writhing prey.

There was a nasty snap of beaks as the curras wheeled away and perched like harbingers of doom on the upper branches, just above the increasingly vulnerable dacelo gigas (Laughing Kookaburra).

“Bugger off Kooka while you’ve got the chance”, I yelled to the besieged Aussie native as he stood his ground like Horatio against Lars Porsena and his Etruscan hordes at the Bridge.

I ran into my garden shed and grabbed the  pair of heavy-duty Zeiss 8×50 T binoculars an old racing writer mate of mine gave me many years before.

The standoff was reaching a hideous climax as the stubborn kooka, solidly defending his precarious perch against the relentless blitzkriegs of the black-winged marauders, shook off wave after wave of gnashing yellow beaks. Edward Scissorhand was child’s play compared to this blade barrage.

Why wouldn’t the stupid bloody bird fly off with his now distinctly defunct and sagging tucker and enjoy it in peace, or regurgitate  it with his fledglings, or his mate, or whatever somewhere up there in his faraway hollow log?

But no, this little old Aussie battler was no quitter, he was made of sterner stuff.

My vigil, which by this time had lasted more than half-an hour, required stronger sustenance.

I raced down to the back fridge and grabbed a Crownie. I hurried back up to the deck just in time to see King Curra, a demonic looking Mephistopheles if ever you’ve seen one, launch yet another manic full frontal attack. This time the great yellow beak grabbed a chunk of the swaying victim and through the binocs I could see that there wasn’t much left of the hapless rodent’s upper abdominal and cranial regions.

To say he’d become a bloodied mess would be to understate it. I had to turn away from the carnage to have my first sip of the sustaining amber fluid in my trembling paw.

Still, the kooka refused to flee…it was like Tobruk, the Alamo, The Siege of Troy, all taking place on the snowgum tree in my backyard.

Already I had dubbed the drama Custer The Kooka’s Last Stand!

But then there was an apparent truce…the curras, squawking their hideous war cries, retreated to a higher limb, still glaring down at their denied prey, when suddenly the kooka started pounding his gory delicacy backwards and forwards across his perch, spraying blood and gristle everywhere.

I flinched and instinctively covered my Crownie bottle. As I looked back, the gruesome tenderising of the rodent was complete, and with one gulp, the animal had disappeared down the kooka’s throat.

I could still see the rodent’s tail twitching and dangling down some five minutes after the main torso had entered his devourer’s rather capacious inner disgestive tract.

Once the horrible  gulping and refluxing had settled down, Custer gave one last gurgling half-chortle and , unlike his ill-fated 7th Cavalry namesake, flew off to freedom and, as they say, the bush once again settled down to its uneasy calm. More than an hour had passed.

Intrigued by this extraordinary near-slaughter which enfolded before me,  I contacted the experts at the Australian Walkabout Wildlife Park.

I received a lovely reply from a gentleman called Nick who explained at least some of the bizarre circumstances I have just outlined.

“So I reckon your old kooka knew he couldn’t escape the currawongs and decided to weather the storm. When the time was right he tenderised the animal and downed it whole as kookaburras normally do.

“Without the currawongs,  he would have eaten his meal quite quickly after killing it,” he wrote.

So there…I didn’t realise what fascinating adventures take place in the Ornothological Kingdom.. David Attenborough eat your heart out….but I can assure you, those big Zeiss 8x50s have a permanent place on my deck from now on.

PS: I was wondering if anyone had an address for the Totteringham Twitchers Club..I knew a nice bloke there once called Nigel…..

Sports Can Be A Taste Of Youth