WHY MAISIE’S SPIRIT WILL SOAR ON HIGH FOR EVER

The ancient Irish fort of Dun Aengus is perched on a sheer cliff face with a dizzying drop of about 100 metres to the turbulent Atlantic Ocean beneath.

Dating back to the Iron Age, more than 1100 years BC, the bleak site is situated on the dramatic Aran Islands, in County Galway.

To get to the top of the wind-battered cliff battlements requires about a kilometer trek across broken uneven boulder-strewn surfaces….not for the faint-hearted.

Luckily my wife Jenny and I were well shod and well prepared as we laboured over the rocky terrain and clambered up sometimes steep outcrops towards the breathtaking spectacle on the fort’s pinnacle.

We’d left my mother-in-law Maisie behind at the picturesque village below so she could browse through the Visitor’s Centre and enjoy a coffee and cake while we were ventured forth.

Eventually we reached the top, and gazed in awe across the eerie landscape. The silence was broken only by the whistling of the cold Atlantic winds and far below, the muffled thunder of monstrous waves battering the impregnable walls of the cliff.

Suddenly behind us we heard the laboured breathing and panting of another climber scrambling over the rocks and a familiar woollen beanie appeared. It was Maisie. She was red-faced and out of breath, she’d skinned her knees and elbows but the look of triumph on her face was something I’ll never forget.

“I got bored waiting down there at the centre so I thought I’d come and join you,” Maisie said. 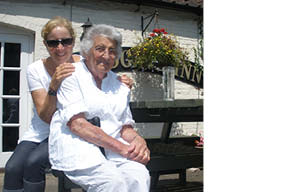 She was almost 80 at the time and although the feat was hardly of Everestian proportions,  it demonstrated Maisie’s unquenchable zest for life and new adventures. I think her fortitude was forged after she and her family survived the horrors of the London Blitz in the Second World War.

About 15 years ago now, Maisie had eagerly accepted our suggestion that she come to Australia to stay with us for a while and the next thing we knew she’d booked on the Canberra with a friend and it wasn’t long before we were standing on the pier at Circular Quay’s Overseas Terminal waving our hankies at the face beaming down to us from the liner’s majestic decks.

Her appetite to learn about all things Aussie was limitless and I think we saw more of our state with her than we’d had for decades on our own. She made friends everywhere and once when we took her to the Hunter Valley for a winery tour, we thought we’d lost her for a while until we found her deep in a highly technical conversation with the chief winemaker.

Back in the UK one of Maisie’s long-time hobbies was making fruit wines such as elderberry and blackberry and she impressed the local vintner with her knowledge of the whole process.

On that trip, she also experienced one of the dreaded  “Aussie nasties” so feared by our overseas visitors.

I shouldn’t laugh but I’ll never forget the sight of her running out of the ladies shower rooms on the Manly beach promenade holding her reddened arm and thrusting it under my nose saying she’d been stung by something horrible.

“It’s only a bluebottle Maisie, nothing to worry about, I’ll just get some ice from the lifeguard and that’ll fix it.”

“It’s not a bluebottle, they don’t sting, and they don’t live in the water, silly,” she gasped.

Of course I twigged then, to the Poms bluebottles are what we call blowflies. We all had a good laugh about it later and I told Maisie she could now call herself an honorary Aussie as she’d been stung by the iconic jellyfish.

We always made a point of taking her with us on our annual trips from Australia to the UK and Europe and she never once shirked a challenge or held us back or became a burden. She was always the first up in the mornings and delighted particularly our Irish hosts with her steely determination to not leave a scrap behind of the daunting breakfasts famous in that wonderfully hospitable land.

One of our more memorable trips with her was to spend an idyllic week in a secluded luxury Tudor-style farmhouse deep in the deer-frequented woods of a picturesque valley not far from the Yorkshire Moors.

There were lots of rambling walks along the salmon filled streams, standing beside the railway line and waving to the people on board the historic steam trains puffing their way through the deep green valley floor.

Only recently we found that throughout all these years, Maisie had kept a meticulous diary and photographs of all our tours, even of the day trips to various historic sites, and also to the wonderful pubs where we’d have roast meat off the spit and Maisie and I would have a glass of lager each and we’d all share a wine (preferably an Aussie one on Maisie’s insistence) with the meal.

Throughout the more than 30 years of our marriage, Maisie never once expressed any disappointment that her only daughter was living over the other side of the world and that showed in all the personal papers that we have lately been going through. She kept all the articles I sent her about our trips and even treasured a pencil sketch of my right foot Jenny sent her when she wanted to send me a pair of slippers for my birthday.

We used to joke together that she was the perfect mother-in-law as she lived 12,000 miles away. Now I look back, despite the tyranny of distance, she was in every respect an ideal mother-in-law just because she was Maisie.

It wasn’t just the items of memorabilia that Maisie treasured and dutifully documented in a whole series of diaries and notebooks. There were all the letters, photographs and postcards Jenny and I sent to her over the 30 years since I claimed my English bride and she became an Australian citizen and to Maisie’s intense pride, a surf lifesaver. 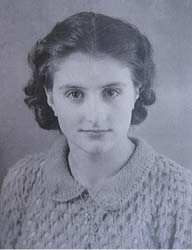 Maisie as a young girl in London

Lately Jenny found touching letters from Maisie’s beloved late husband and my father-in-law Cyril when he was in the British Army and some private thoughts she penned when he died suddenly back in the 1980s. She lived alone but never lonely after that sad time as her warm
nature and kind heart attracted friends everywhere she went.

In recent times Maisie, who turned 91 last July, had to take her outings in a wheel chair but loved nothing better than being pushed by Jenny along the promenade of the Norfolk beaches near her home, stopping for an ice cream or if it was a chilly day, some fish and chips or a plate of cockles.

I wasn’t on the last trip over to see Maisie unfortunately, but luckily Jenny and her brother Roger were there when Maisie’s indomitable energy began to fade from her ailing body and they could see the dimness coming into her eyes.

But she held on long enough for Jenny to arrive from Australia and she was there when Maisie slowly let go. She had seen her children in the last week of her life and she passed away peacefully.

Maisie is now buried beside her devoted husband in an historic cemetery, in London’s east, where Cyril has been waiting for his beautiful bride for three decades.

Long may they enjoy their eternal rest.

FOOTNOTE 1: I want to go back to Ireland’s Dun Aengus one day, and climb its rugged battlements and I know when I look behind me on that wind-swept towering fortress, I’ll see Maisie’s face climbing up towards me.

FOOTNOTE 2: For information or to make donations visit the Alzheimer’s Australia website or www.fightdementia.org.au

Main picture: John McNamee with mother-in-law Maisie at the mist-shrouded Lakes of Kiliarney in teh Ring of Kerry Southern Ireland

On Board Australia’s Largest Cruise Ship