On Board Australia’s Largest Cruise Ship

Take a closer look inside our largest superliner – the 88,500-tonne Carnival Legend.

In keeping with its name, the 88,500-tonne ship enjoyed a legendary entry into the Harbour with the Australian Girls Choir performing a medley of well-known Australian tunes with 3,000 guests and crew singing along.

Carnival Legend is the first international ship to arrive in Australia for the 2015 summer cruise season which will see a record flotilla of more than 35 different ships sailing in local waters. 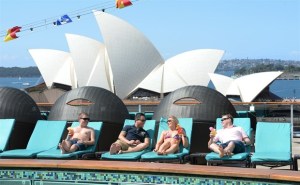 Find out more and take a look at this huge ship!

Find out more at www.carnival.com.au

WHY MAISIE’S SPIRIT WILL SOAR ON HIGH FOR EVER