Nightly News on a “Kneeds” to Know Basis Please 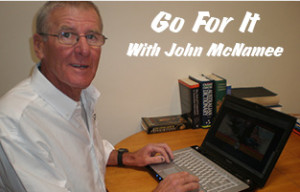 Of course it’s not unusual when you turn on the nightly news to get some sort of shock at what you see.

We live in a violent world.

But this wasn’t that sort of shock….as I waited for the ABC 7pm news to start, I saw to my horror Juanita Phillips wasn’t at her desk!

She was standing in front of some sort of back projection screen depicting whatever it was leading the news that night.

I was appalled…what was worse, I could actually see her knees!

Now when I turn on the nightly news I’m not sure if I‘m ready to see Juanita’s knees. It’s a bit like seeing the Pope suddenly hoisting his cassocks and doing the highland fling on the Vatican balcony.

Or Her Majesty the Queen doing a handstand on her ceremonial horse during the Changing of the Guard.

There’s a time and place for everything and I think the ABC news chiefs have got it wrong.

I’m not sure we are ready to see the wonderfully dignified Juanita Phillips baring her lower legs.

As far as knees go, Juanita’s are undoubtedly up there with the supermodels of the catwalk but that’s not the point.

I mean you don’t expect Jennifer Hawkins or Miranda Kerr to suddenly pop up on the screen and start pontificating on the Syrian war or the Federal Budget.

Having Juanita at her desk reading the global news with never a blooper, sitting there in her Buddha-like tranquility and serenity meant all was well with the otherwise mayhem of the media circus.

Now you expect those scrawny young things on the commercial networks to flash a bit of flesh and parade around in their designer garb fresh out of the fashion houses.

I’ve seen some young female reporters, and I’m not here impugning their journalism, covering  stories wearing something that could get them banned from one of the more respectable nightclubs.

Back in my day if a woman reporter turned up to a major news event looking like that, she’d finish up writing the shipping movements and putting captions on the weather maps for six months. (And to be fair the same fate awaited the blokes who turned up with scruffy shoes and no collar and tie.)

But back to Juantia…at her magisterial desk, she upholds the dignity and urbane professionalism we came to expect from the master himself, Brian Henderson.

I would warn those ABC chiefs that they tamper with Juanita’s image at their peril…and it’s not just those knees I’m talking about.

Sometimes they’re sent her out to her desk with a bouffy, teenagey hairstyle more suited to a backing singer from The Voice.

Even she looked uncomfortable.

On other occasions these self same ABC news chiefs have ripped her out of the studio and sent her to cover one of those dreaded Special Reports which certainly don’t highlight Juanita’s obvious professional skills but have previously been well covered in other sections of the media and are full of embarrassing Dorothy Dixers and soft “talent”.

But I didn’t start this item to criticize the dwindling standards of TV and newspaper journalism.

Suddenly a voice from without disturbed my grumbling reverie:

“What are you watching out there darling, dinner’s almost ready?”

10 Amazing Staircases Around the World